Whitethroats in the rain 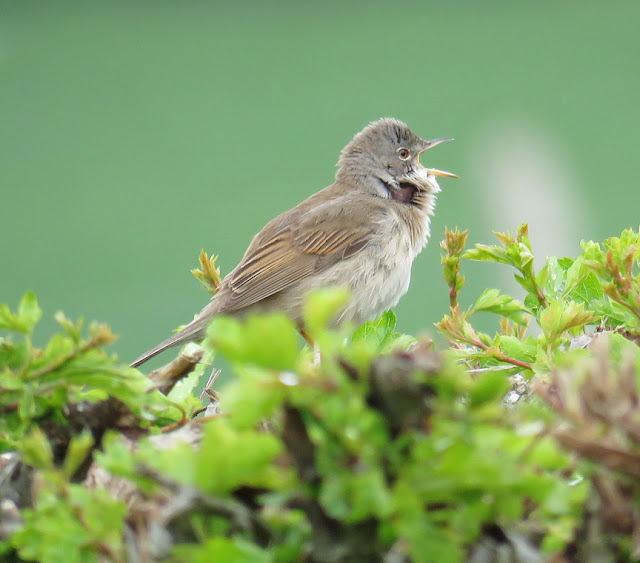 I arrived at Priest Hill by 05.30hrs, full of hope for migrants seeing that the wind and rain had got together to promise us birders some action. To cut along story short I left the site by 07.30hrs sans passage migrants... BUT... it was an atmospheric couple of hours. The low cloud and calm conditions gave everything a slightly 'cotton woolly' feeling and the stillness was dominated by the scratchy warble of Common Whitethroats. There was barely a moment that I couldn't hear at least one in song, and at times up to four were assaulting my ears. I reckoned on a minimum of 32 present. Trying to gatecrash in on the act were four rattling Lesser Whitethroats. It was all quite delightful.

I ventured over to Canons Farm (09.30 - 12.30; 14.00 -15.30hrs) where a further nine Common Whitethroats were recorded (including the individual above). However, they were upstaged by a mid-morning female Ring Ouzel, that flew out of the hedgerow by Canons Farmhouse and crossed the fields before alighting at the top of the tallest tree by the L&G car park. That was the last that I saw of it. My first Hobby of 2017 was also seen. A lengthy, heavy period of rain sent me back to the car, and home.
at May 01, 2017

Brilliant stuff, may they soon make it up here too!

Real characters in the scrub

About time you found a rare bird Seth - stop mucking about with all of this exotic flora!

Did I mention the sandgrouse I had over the house yet.....