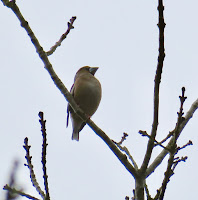 At Dorking Wood by 06.45hrs and in a steady rain until it stopped by 08.30hrs, leaving a brighter and drier rest of the morning. The Hawfinches at the northern edge of the wood were still present, numbering at least 90 birds, but their behaviour was very different indeed. There was no 'coming together' of the birds, with modest groups scattered in view. There also appeared to be several formed pairs, with much chasing through the canopy and wing-flicking. Many seemed agitated and would often take to the air and fly high, circling around before alighting, often back in the same tree. One or two small groups appeared to leave high and northward. A number of birds took up prominent perches where they stayed in place for minutes on end in lonely vigil. Maybe they are getting ready to pair, break the flock up and depart, although there is hope that some just might remain. Nearby there were two at Chapelhill Wood, one at Polesden Lacey and six at Ranmore Common.
Dorking Wood Hawfinch

Derek Faulkner said…
A Whitearse at Littlehampton beach today - time for you to drag yourself away from Hawfinches - some might say, at last.
11 March 2018 at 14:23