The return of Juniper Bottom 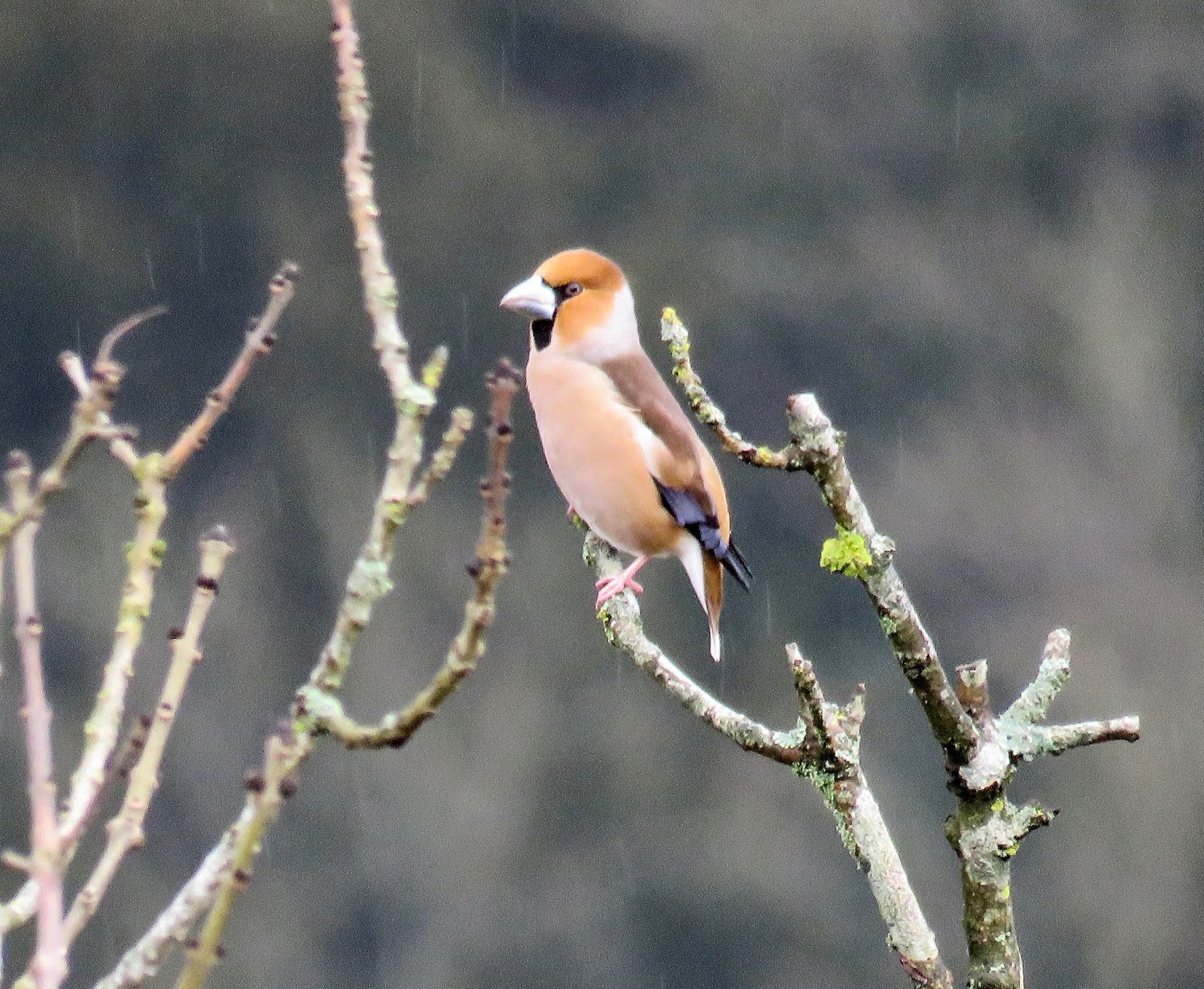 The forecast of a very wet dawn had postponed my planned visit to Bramblehall Wood, but the rain had abated by 08.00hrs so the decision was made to check on Juniper Bottom. This was mainly due to my having seen at least 115 birds there two days ago and the suspicion that the enormous flock from Bramblehall Wood, (once it has headed up the slope and onto Ashurst Rough and Juniper Top) was then spreading out into Juniper Bottom (and beyond). And so it proved.

By 08.45hrs I had taken up my position allowing clear views of the banks of Yew, and the bare deciduous tree-tops, on the eastern flank. Hawfinches were already on show. For the next hour flocks were largely spilling over into the valley from the high ground to the south-east (Juniper Top). They were making their way either northwards along the eastern ridge, or flying across the valley and up onto the western ridge (Box Hill and Lodge Hill). In between frequent showers I was able to witness a number of sizeable flocks on the move (37, 40, 31, 22, 39, 30 and 34 being the largest) with several alighting above me in mature Yews, bestowing upon me an audio Hawfinch accompaniment to the spectacle in front. My total for the visit was of 249 - the pedantic amongst you may prefer c250. I have checked the 'Bottom' several times over the winter, and in the hours after the Bramblehall flock goes largely missing, but with no reward, so these latest encounters seem to me to show a change in the birds behaviour. If you are planning on visiting Juniper Bottom, park in Whitehill Car Park and take the right hand footpath (which runs along the valley floor). After 600m you will reach a clearing on the western side with up to a dozen prominent Larch trees. Walk up this cleared slope to the treeline and then look back across at a wall of Yews and views up to Juniper Top. After 08.30hrs might be best if these are indeed birds from Bramblehall Wood.

Because birds were still dribbling down from Juniper Top I decided to go up and investigate. Even before the top was reached a tight flock of 45 were inadvertently flushed from a stand of Silver Birches and, once at the start of the woodland at the peak of the hill, a further 21 were milling about, so 66 in total. If you are planning on visiting Juniper Top, park in Whitehill Car Park and take the left hand footpath (through the gate). Walk directly up the open hill, scanning trees either side, until you reach the top, and the edge of the woodland. There will be further Hawfinches within the wood but will be harder to see. After 08.00hrs might be best if these are indeed birds from Bramblehall Wood.

Lodge Hill, west of Juniper Bottom, was given several scans and each time a number of Hawfinches were on show. 24 present.

Finally I drove round to Box Hill, driving up the zig-zag until I came to the car park situated half-way up. Walking back across the road I then took the steep path (steps cut out of the slope) directly opposite, walking up to level ground where I could then look back north and eastwards to even higher ground (in fact this is viewing the 'other' side of Lodge Hill). There appeared plenty of Hawfinches, flying across the valleys, with a minimum of 35 being present, including the beautiful brute of a male that I photographed in the rain as it sung from an open perch (above and below).

If you are planning on visiting Bramblehall Wood this weekend (400+ were seen yesterday by visiting birders Nick and Malcolm) do get there very early. After 08.00hrs can be too late! Walk along the footpath (directions in previous posts), maybe half way along the open field, until you come level to two horse jumps. Walk down to the fence line and secure a good view of the opposite tree line and the open sky above - it can be done. Then wait and listen. Good luck!

It has been good to see numbers at Juniper Bottom over the past few days, which was the scene of so much excitement exactly five years ago. Little did we know then that those 110-130 Hawfinches would be eclipsed in such style - eclipsed, but not forgotten.. 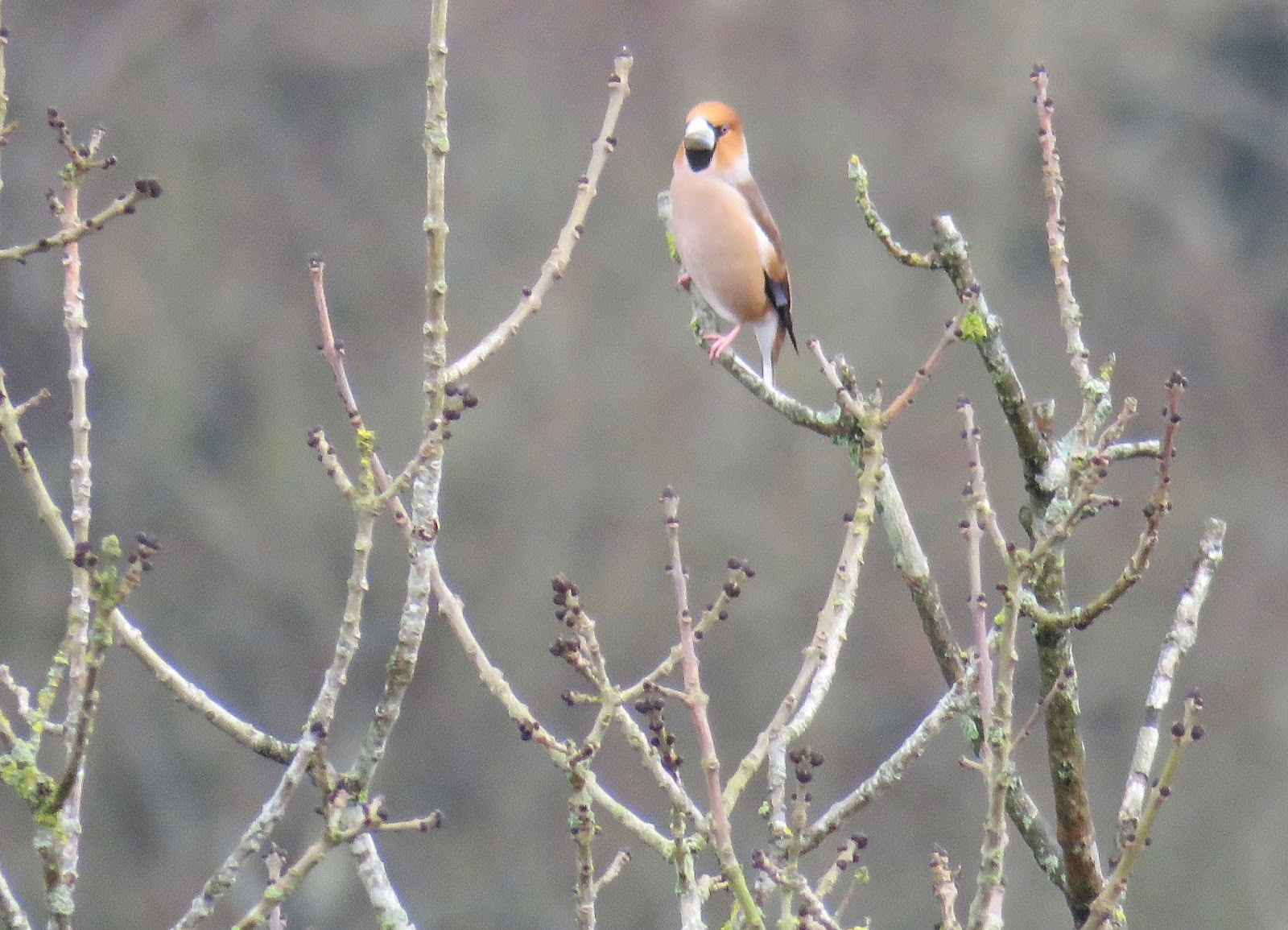 Simon Douglas Thompson said…
That hawfinch has an "Angry Birds" expression
15 March 2018 at 17:25

Unknown said…
Steve... We saw them! We stepped out of the car in the Whitehill car park, heard them, looked up and there they were! We saw 3 or 4 sizeable flocks of about 20-30 birds and various dribs and drabs, as well as a marsh/willow tit which unfortunately was silent leaving me stumped as to which it was! It seems churlish to say it but the only disappointment was not getting any really good views - it was all flyovers or distant perched birds. But very exciting! I may have something for you as well... There’s a pylon on the stretch of the A243 running parallel to the M25 between two roundabouts, one called the Knoll rbt... With a long-eared owl sitting on the top! Sadly there was absolutely nowhere to stop. Is it a fake?!

Steve Gale said…
Thanks for the information Pete and I'm pleased that you saw them. Your tit was undoubtably a Marsh Tit - they are relatively common in the area and Willow Tits are now lost as a Surrey bird. Your owl could well be a decoy, but then again...
17 March 2018 at 10:30