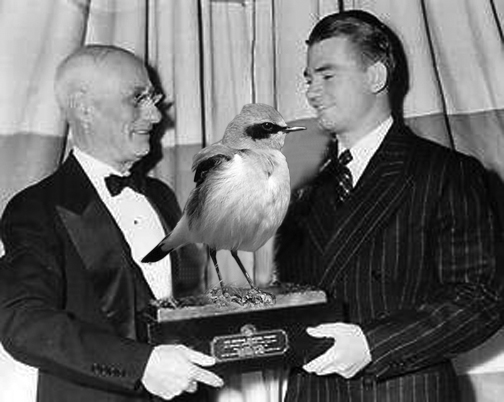 Time is up, the white-arses have been counted and the results are in! I am delighted to announce that Martin Casemore is the winner of the 2019 ND&B Wheatear Trophy, with a new White-arse record count. Professor O. E. Nanthe from Brighton University (left) presented the trophy to a well scrubbed-up Martin during a ceremony held in a marquee on Dungeness beach this morning. Afterwards, a tearful Martin spoke to me:

"I was really pleased when you decided to run the Wheatear competition again. I was in a bad place, I had become obsessed with gulls. I was swimming out to the islands on Burrowes Pit to roost with them at night; I was going into Hastings on summer days and nicking chips and ice-cream off of the holiday makers along the sea-front; and had even started to shit on people's cars. The final straw was when I met up in secret with 'other' gull enthusiasts, where we would dress up as our favourite gull species and imitate their calls. I was always a Caspian, and David - sorry, I mean one of my fellow enthusiasts - was always an Audouin's.

Having won this award before I knew of all the benefits that came along with winning - being pointed at in the street, shouted at by dog-walkers and getting back ache from lugging all my camera equipment around. Wheatears are harder to photograph than gulls as they're smaller and they're not big and white - it's one of the reasons that my mate Mark never sees them. My images were also scrutinised by JTM at DBO to see if they were ringed. If they weren't, he'd run out of the observatory double-quick with a spring trap and a bag of mealworms. He gave me a biscuit and a cup of tea for each un-ringed bird I found. I've put on a stone in weight since the first Wheatear arrived back in March."

It really was a two-horse race this spring, with another shingle-hugger, Paul Trodd, providing the competition. The final result was:

Martin also wins the Best Photograph category, and not just because Jono Lethbridge couldn't be arsed was too busy this year. Here it is, with a real dollop of Dungeness as an extra: 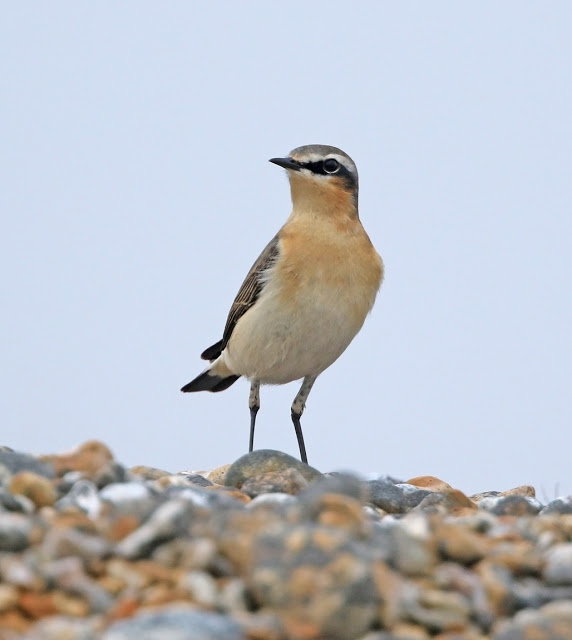 There was some compensation for Paul, as he is the winner of the Earliest Posted Photograph of a White-arse, which he uploaded on March 7th. He should also take some comfort in that his total of 30 Wheatears would have been enough to win the big prize in most years.

A final word from our two-time champion, Martin:

"I do need to stop looking at Wheatears now - I've found myself trying to stand on fence-posts and seem to be flexing my knees and jerking up and down a lot..."
at April 30, 2019

Steve, I am delighted to have won these two prestigious awards. Thank you, thank you, thank you to the ND&B
illustrious panel of judges for seeing fit to honour my work with this award. Thanks are also due to all the pretty little Wheatears which grace the shingle each spring, flitting hither and thither showing there lovely little white arses!

We are in awe of your devotion to all things Wheatear Martin. Well deserved... now you can return to the gulls!