We are now entering into one of the most exciting times of year to be birding. Spring has been creeping up on us and, according to the weather forecasters, most of us are going to be receiving a southerly airflow accompanied by warm temperatures by Sunday. The birds are, of course, already on the move, many silently passing over us out of sight. But overnight it is possible to pick up some of these nocturnal movers by call. I gave it a go yesterday evening, sitting on a bench in the dark, and was staggered by the results.

At the moment we are blessed by a big reduction in noise pollution. Less traffic noise, little aircraft noise, fewer people gallivanting around. Add to that a calm, cloudy night (as it was last night here in Banstead) and you have the recipe for success. I have lived in our current home since 1987, and have, over the years, picked up the odd wader calling at night. But last night I added three new birds to the garden list - they are all documented below. The previous three additions were spread out over three years.

April sees a large number of waders on the move. As we reach mid-month it should be possible to hear them from any garden in our collective. A still night, a bit of cloud and a lot of patience should reward those who sit out and listen.

OUR COMBINED TOTAL IS 114 SPECIES   We still seem to be missing Little Owl, Kingfisher, Firecrest and Brambling.

Today's additions are : Osprey and Treecreeper.

This brings our 'garden collective' up to 44.

There have now been 40 garden firsts across the competition.

Other news from around the gardens

Steve G (Banstead, Surrey) is up to 53 species courtesy of a remarkable night-time vigil that produced Brent Goose, Coot, Gadwall and Moorhen. A morning Greylag Goose and afternoon Long-tailed Tit paled in comparison but are still worth as much to the list.

Arjun D (Wallington, London) also fared well after dark, with his noc-mig set-up recording a skein of Brent Geese, Redshank and a Coot, taking his score to 45.

Debbie S (Portland, Dorset) was able to report a few migrant thrushes in the 'Seamist' garden. Shades of things to come...

Wes A (Capel, Surrey) had no additions, but was consoled by 85 Redwing moving NE.

Oscar D (Chiswick, London) was working outside this morning and the by-product of this was adding Marsh Harrier (low north-east), Red Kite, Rook and Redwing to his list. 45 species.

Richard P (Charmouth, Dorset) watched two Ospreys (one of which below) power up the valley and over his garden. Share them out Richard! Not in the same league but a Bullfinch raises him up to 50. 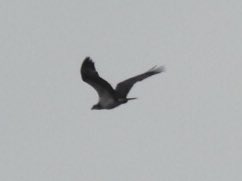 Michael R (Battle, East Sussex) has added a few overdue species to his total of 41 but they did include two Crossbills.

Josephine S (Leatherhead, Surrey) was delighted to see a Jay today, not a regular species in her garden.

This is just for a bit of fun, who's recorded the most species so far. Remember, the overall winner will be based on their percentage score, so a high species total will not necessarily win it. Or you could be like me, laid-back and just enjoying the ride with no hope of winning anything... it is, after all, the taking part that counts in  #BWKM0

Hi Steve, but is there an actual list of the species seen so far? As an eclectic example I imagine it already looks remarkable.

I added three species to my lock-down list yesterday; House Sparrow, Lesser Black-backed Gull and Common Scoter! So, my lock-down total for the garden now stands at 23.

I sat outside last night with a beer for a bit, and at 2100 had a flock of Common Scoter calling, moving from west to east! Totally blown away, and a first for my garden!

My own garden list has been adjusted up by one to sit on 63. The lock-down list is on 35.
The ratio, currently stands on 55%.

30 mins effort today added 8 species, namely Great Northern Diver*, Black-throated Diver*, Red-throated Diver*, Merlin*, Meadow Pipit, Black-headed Gull*, Black Guillemot* and Golden Eagle. All from a picnic bench in front of the hotel (garden ticks marked with an asterisk). Black-headed Gull and Merlin are both pretty scarce here, so I'm well pleased with those! Puts me up to 35 species

RT Diver brings my list to 48 but time and patience brings the snail to Jerusalem (Irish proverb). And we have much of both. Despite that I was obviously looking the wrong way when the reported WT eagle passed Craster heading north a couple of days ago.