Social distancing and the birder. Should be simple, shouldn't it? The government have asked us to not leave home unless undertaking one of a small number of permitted essential tasks, which includes daily exercise. The suggestion seems to be that we exercise for no more than an hour and take that exercise, from home, on foot or by bike. I decided from the off that I would not feel comfortable with walking to one of my patches and then birding. The walking bit would be fine, but could I really claim that the birding bit would count as essential? Of course not.

So my daily exercise became a 45-60 minute walk around the streets, with the odd visit to Priest Hill SWT reserve, just a 12 minute walk from home, where I walk a circular track. I have seen Cattle Egret, Ring Ouzel, Black Redstart and Grasshopper Warbler here, so it has a birding pedigree. I decided not to take my binoculars with me, as to do so would mean that I would birdwatch. I would stand still. My visits would go beyond the prescribed time. Part of me wondered would that really matter? After all, I wouldn't be in a crowd, the reserve is fairly quiet and I wouldn't be at risk to myself, or others. But what if millions of us took that attitude? A golfer taking a ball and a club 'just to play one hole'. An angler finding a quiet river bank 'just to cast out a few times'. Wouldn't hurt. Nobody would come to harm. But if we all did it...

I have watched with disappointment and, at times, disbelief, the number of posts and tweets from birders over the past few weeks that have exposed a flouting of our collective lockdown. Hours having been spent in the field. Going for birds (because they were patch or county ticks). Is it any of my business? When people are dying of Covid19, including members of an under-staffed and under-resourced NHS, I think it is all our business. So I posted this last night on twitter: 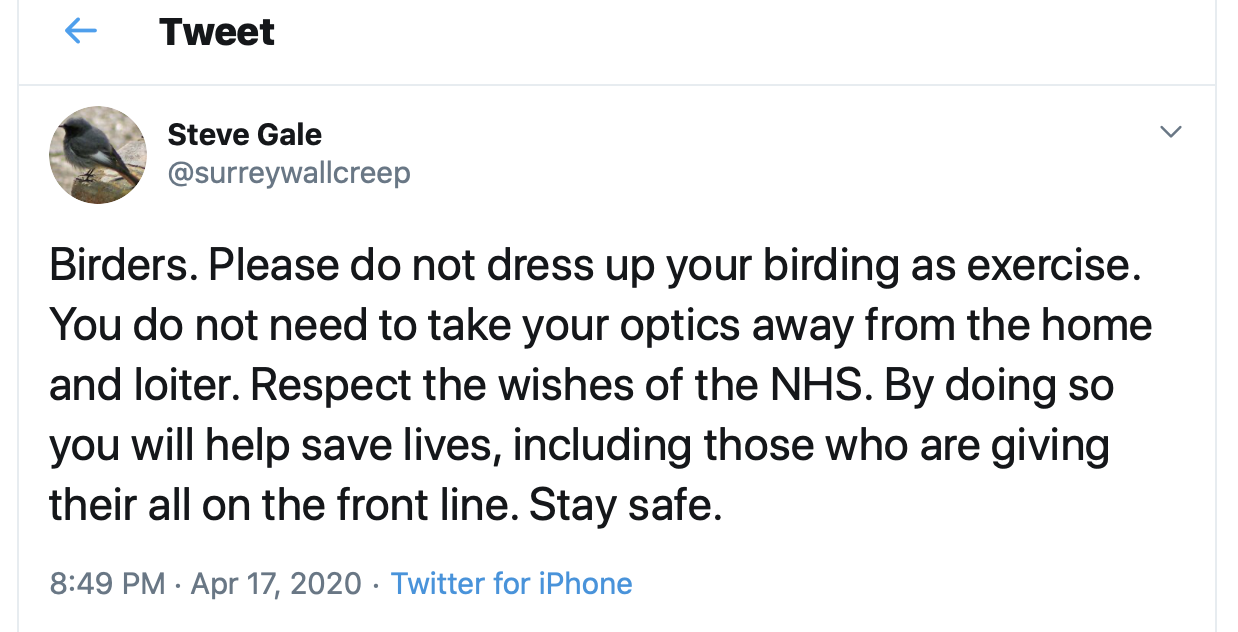 It has generated a great deal of discussion. As much as there are plenty who have agreed with it, plenty have taken issue with it, with one particular sentence causing a problem:

You do not need to take your optics away from the home and loiter.

Many of those who have replied to the tweet cannot see what is wrong with carrying binoculars and stopping to briefly birdwatch. Almost all of them point out that they are in the countryside, or an urban park, well away from people and well away from infection. There are also others who have quite rightly highlighted the benefits that such passive observation/nature study on walks brings to those of us with mental health issues. Whereas to some of us this lockdown and lack of freedom is just a pain in the ass with periods of boredom, to others it is severely debilitating.

Maybe I should have left that sentence out. My point for including it was to suggest that, if you were out exercising, you don't need your binoculars. If you take them with you, you do so because you are birding. Birding is not essential. Remove the binoculars and you remove the loitering. With hindsight the suggestion that the optics should be left at home was a poor one. Used with discretion they would cause no harm at all.

I have been accused of being self-righteous (I have to agree there) and an apologist for the government (which I am certainly not). My own 'draconian' take on what we should - and should not - be doing is obviously out of synch with what a number of my fellow birders believe. Even if my tweet made one - just one - birder think long and hard about whether or not their actions were antisocial or even harmful, then job done. The tweet wasn't aimed at ALL birders. It was a polite request to those that were clearly overstepping the mark. And to those who suggest that it isn't my business anyway, I will repeat myself - it is all of our business.

Please look at those last two words of that highlighted sentence:

You do not need to take your optics away from the home and loiter.

Lifting the bins to look at a passing Buzzard, bending down to examine a flower or taking a photograph of a bee is not loitering. Birding on site for over an hour is.
at April 18, 2020

Steve, you've taken on an emotive issue here, and fair play to you for doing so. It stimulates discussion. And it stimulates thought. My thinking regards what is acceptable behaviour (for me!) during this lockdown has evolved, and will no doubt continue to do so. Every person's circumstances are unique to them, and I've reached the conclusion that I have no right to judge anyone else for the position they've taken. Indeed, how could I? Thanks for making me think about this issue some more. You certainly won't get any criticism from me for doing so. Quite the opposite in fact. 😊

Good to have this conversation. I struggle with not loitering to watch hoverflies and beetles on flowers but it helps having 2 kids in tow to remind me to keep walking. There is no doubt that as with everything in life there are some really taking the mickey and spending far more than the allotted hour, but I'm not sure what I'd do if I wasn't lucky enough to have a garden to disappear into whenever i wanted...

Yes Steve, I fully agree with you on this matter.

However, the totally without humour controller of the London Birders Wiki site, has added this bit to the first line of the above.

People should only be birding from their homes or as part of a daily exercise (walk) in a local area. Under no circumstances should anyone travel to a site.

Well that's alright then. Just move the goal posts to allow birding on a local patch to carry on as if nothing had happened.

If no one had any influence on anyone else, we'll have a form of anarchy. It ends up being, 'do what you want regardless, no such thing as right or wrong, morals are just a matter of personal taste'.

Me, I stick to the rules. I don't bend or break them. I don't adapt them to suit my purpose. I have no need to. I have no purpose. It's why I don't write a blog. I have no reason to. I'm an observer of humanity. I have no motivation to make waves with it. I don't want to play with it. Or use it. I don't socialise ever.

And now that I can afford to completely disengage from day to day interactions with people indefinitely. I find myself by default in the best place possible.

Currently I run and cycle. I go out once only. I stay home always the rest of the time.
The duration of the exercise has never been fixed. It was a figure plucked out of the air by Gove.
What matters is where the exercise is undertaken.

I will not go to places I once did on account of the numbers of others choosing to go there now. I will not visit shops to get refreshments on principle, despite them being open for business.

The thing not to do is stop and settle. Especially in places where others may stop and settle too. That's why fishing is off limits. It risks concentrating the pathogens if any.

Yes there's plenty out there who are determined to carry on as normal. But they can't. Sure they may want to to go out for a coffee, a restaurant or pub. Or watch football. But the reason they can't is those things currently don't exist.

As the graffiti said in Hong Kong

We can’t return to normal, because the normal that we had, was precisely the problem!

I'm lucky enough to have a wildlife trust reserve at the end of my road, small chalk grassland and small wood enclosed on 3 sides by an ever growing metropolis.My exercise is walking my dogs around the reserve mostly early morning, i take my camera with a small zoom and deliberately leave my bins and big lenses at home for the very reasons you point out. I know if i took them i would linger longer and by mid morning and afternoon the hordes would arrive defeating the object of going early, a mind set that i am happy with for myself but other people have different mind sets and views and they are not going to change no matter how hard we try to convince them, indicative of today's egotistical society i'm afraid..

It's good to read a longer explanation which I think comes across better than the tweet. Problem with anxiety etc is it leads to much guilt and questioning and can feel like the whole world's against you (and thus feels like any tweet is aimed at you). Add in the lockdown and you add in extra stress and judgement from others, plus the difficult issue of coping, among other things. There's been lots of tweets - mostly unhelpful ones - referring to various guidance, interpretations and judging various activities, and of course varying guidance which is also unhelpful. Some have suggested that any amount of pausing is wrong. Exercise isn't my sole reason for being outside, though it is still important to me to do a brisk walk (my natural walking pace!). Mental health is just as, if not more so, important. Of course, time outside is still very limited which doesn't help with coping. Hopefully mental health is deemed "essential" and a "reasonable excuse" for being outside - given the benefits we know it brings, as long as one can do so safely away from others - but we'll never know as the latest guidance ignores it. I originally did tweet the odd photo taken during brief pauses for friends who can't get out to enjoy (they did appreciate it), but that could easily be misinterpreted as having loitered too long, so stopped.

Incidentally, I too deliberately go out at a time I know my local area is quiet. My fear is car loads of people turning up like they used to. I hate it being busy even without the extra risks!

Thank you all for your thoughts. It’s been a real eye-opener on Twitter today...

Surely the fundamental problem is the vagueness and contradictory interpretations from the government of precisely what is permitted and what is not. If you definitely couldn’t drive then (most) people wouldn’t. If you definitely couldn’t use bins/scope/camera then people wouldn’t. So people have to apply judgment and common sense, and some just aren’t as well-endowed as others…, whilst some just lack social responsibility. Personally I find exercise, being outdoors and focussing on wildlife to the exclusion of other worries all very important for my well-being, but as someone who regularly cycles 40+ miles birding have been sticking within 5 miles of home and deliberately picking places and times for their quietness rather than birding potential - not to mention taking my better half with me most of the time, which certainly doesn’t improve the birding results!