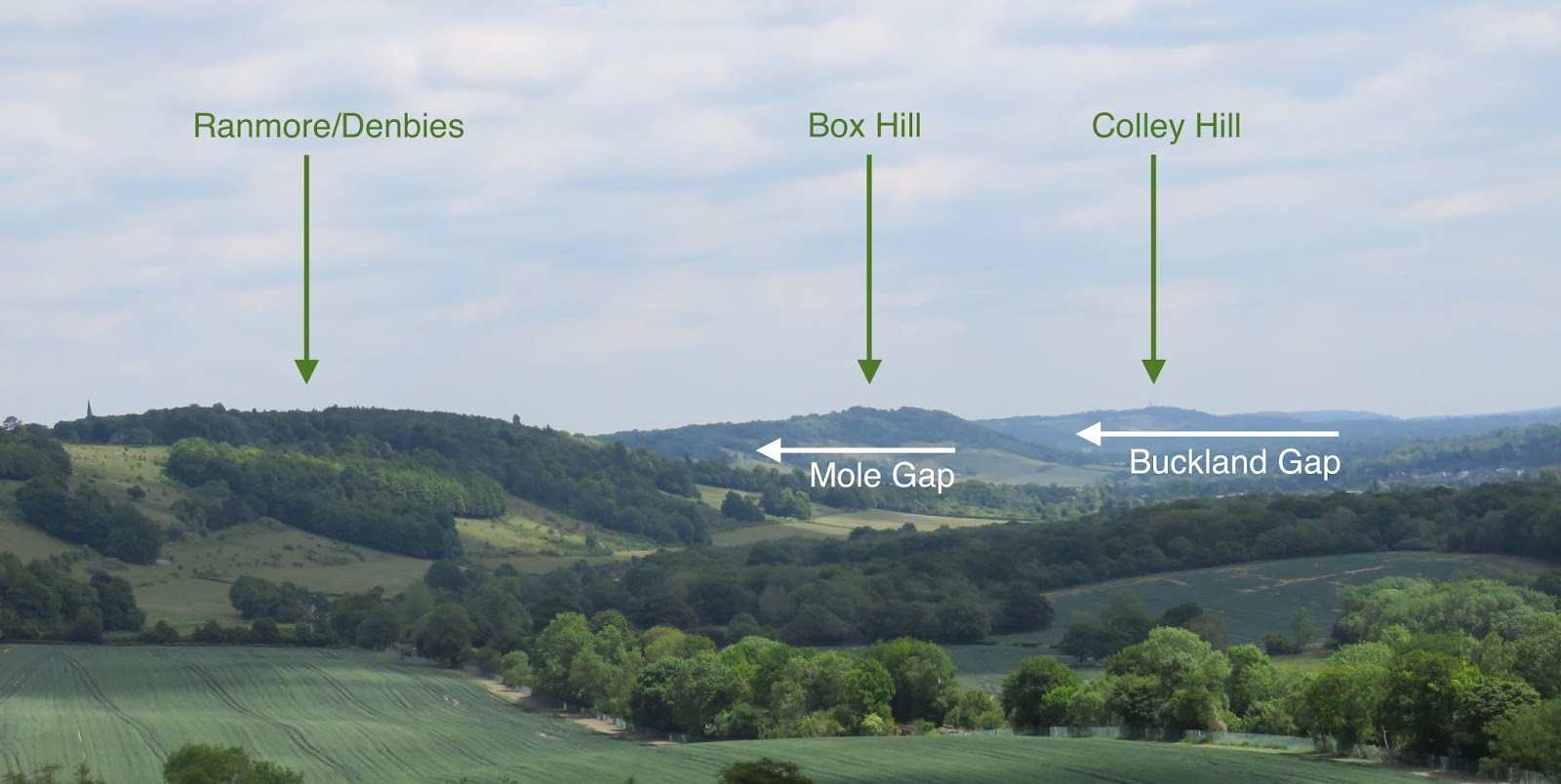 Looking back eastwards from White Downs earlier this week and already this autumn's birding was on my mind. Set out before us are the three 'peaks' on the North Downs that are within my uber patch. I have vis-migged from all three, but not often enough to be able to have a firm idea as to where is best. Obviously the time of year and the weather conditions play a part in which one demands my attention. Last autumn I spent more time at Box Hill and had some success (with thrushes) whereas Colley Hill fared better for finches. Ranmore didn't perform well at all. I plotted the main flight lines at the time and repeat them below.

The questions that are really taxing me at the moment are these. Colley Hill is further east than Box Hill. Have all (or at least most) of the birds that pass Box Hill westwards along the scarp passed Colley Hill on the way? Do birds follow the River Mole and then come in towards the scarp and completely ignore Colley Hill? Have those birds that appear along the crest of Box Hill come all the way along the downs or do they filter in from the plateau to the north? Does the Mole Gap make Box Hill a better site than Colley Hill? Does the gap at Buckland act as a conduit for birds to move up or down it? And do birds that move west past Colley Hill sometimes get enticed to move over and pick up the Greensand Ridge before arriving at Box Hill and miss it altogether?

Colley Hill is an easier site to watch from - cleaner skyline, less visual background interference. Box Hill, as already mentioned, has the (assumed) attraction of the River Mole breaking through the downs at the Mole Gap. But the gap doesn't necessarily make for a better vis-big spot.... or does it?

What is really needed is half a dozen birders prepared to spend the autumn manning watchpoints along this section of the downs. Synchronised counts could then establish numbers at each watch point, direction of arrival and direction of departure. It would also shed light on how many birds come down the gaps or head up it. There is much to learn and a great deal of good birding to be had. But I'm a realist - it isn't everybody's cup of tea. So this autumn will most probably see me birding solo, going to Colley or Box Hill, and at the end of the session wonder whether or not I had made the right choice.
at May 31, 2020