Firstly, a big thank you to everyone who took a hold of the baton and ran with this challenge. It was started in response to the Italian ornithologists who created the #BWKM0 hashtag as a way of coping with their lockdown (by organising a coming together of birds, birders, gardens, balconies and windows.) And this is exactly what our challenge has also been about - a 'virtual' meeting of the birding fraternity during troubling times. As much as there are observers who will have recorded higher percentage scores than others, such competitiveness has been but a sideshow to the genuine spirit behind the challenge, one of camaraderie wrapped up in a celebration of our shared passion. So, to use a well-worn cliche, there are no losers here, only winners.

As for the highest percentage scores - there was a flaw in my method of trying to 'equal out' the gardens - because birders who posted a low baseline score were able to do so by not having birdied much in their garden beforehand - this enabled those scores to be surpassed with ease. Apologies if this was not the case with you, but I'm sure you'll understand my thinking. Because of this, I have used 50 species as a 'starting baseline minimum'. These are the gardens that appear as the 'highest scores' on the graphic. I have worked out everyone's percentage scores and they appear on the table below. As previously stated, this was all a bit of fun and not to be taken seriously!

The hope is that we have found some solace in this 'coming together', made new friends and enjoyed the birding. On a personal note, I have been touched by the number of positive messages received from a large number of you. It has been a privilege to organise and collate all of your observations into these daily posts. Stay safe and thanks for sharing your experiences! 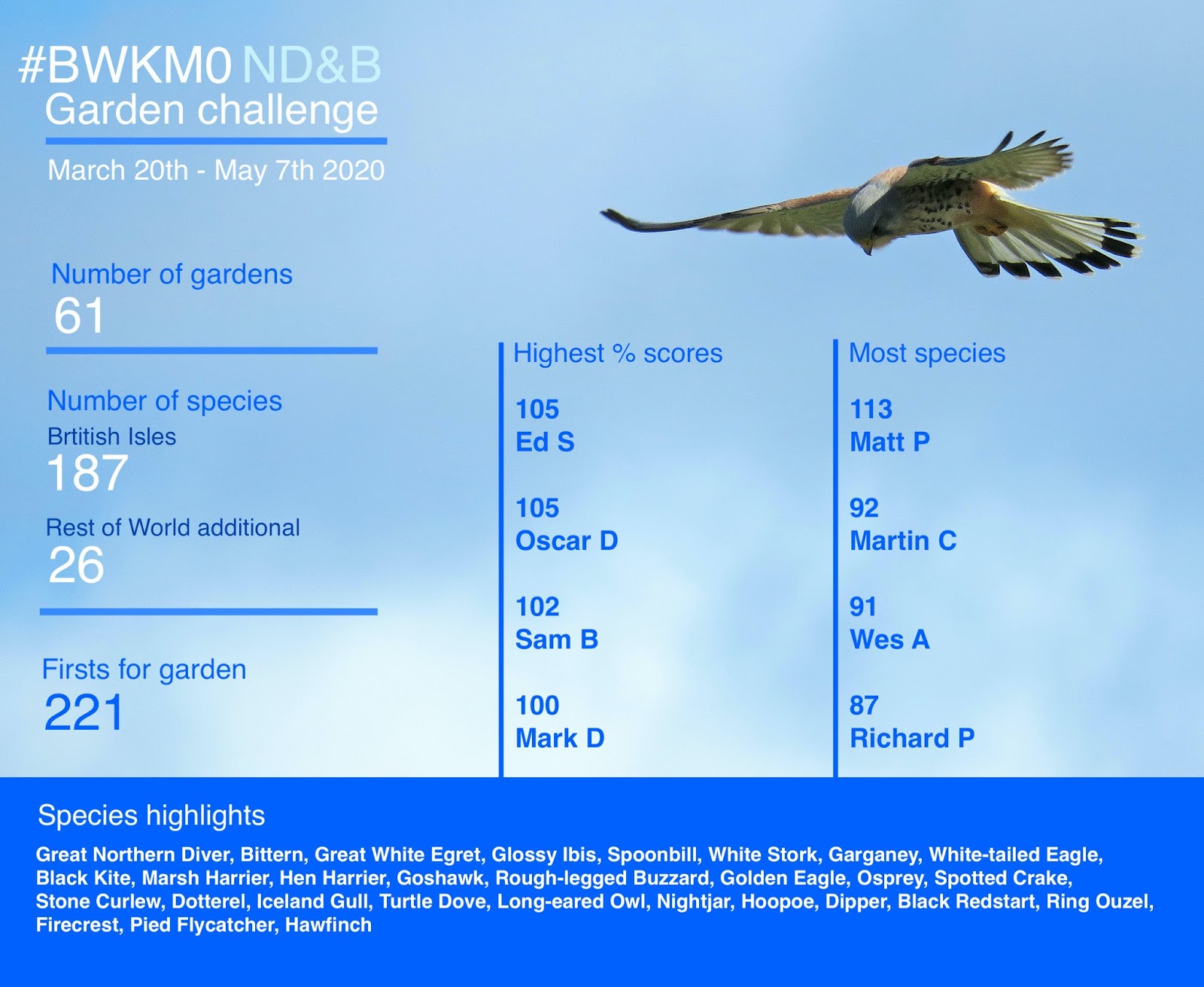 The final numbers
Alphabetical order by first name. The first figure is the garden score as on March 20th. The second is the total between then and today (May 7th).

If you fancy a further challenge, then why not join in 'Curlew Feathers' garden bird race on 16th May. Click here for details.
at May 07, 2020

Nice one Steve. Although I had no garden list to compare with, joining in with this challenge is probably responsible for my experiment with nocmigging, and has certainly got me working a bit harder to see what flies over NQS Manor. 😊

Just want to say a big thank you Steve for doing this!

I'll take my last place with pride! Loved being a part of this still x

Thanks for your support, it’s been a real hoot (in more ways than one!)

I didn't manage to post the Common Sandpiper that I saw the other day, so one more for my list. For some reason I thought today was the last day, so having found a Garganey down on The Shunan I tromped rapdily back up the hill and got it from the garden, pretty sure that's new for the "from the garden" list as the previous ones (3 or 4 I think, in past years) have been seen on my way to work from the car window. Also added Whimbrel a few minutes later as the one that had been on The Shunan flew off calling. A lovely still, if grey day here with good visibility mostly. This evening after tea a male Hen Harrier was hunting in the garden, viewed from the kitchen window.

Meant to say thank you Steve as well.

What larks! (None seen from my home, sadly.). Thanks, Steve!