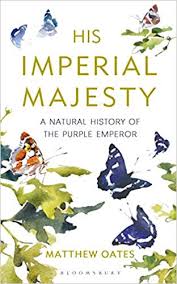 They stood in small groups. Mostly men, and mostly of a 'certain' age. Cameras at the ready, a few carrying binoculars. They had their own areas to patrol, a few hundred metres of a path or a clearing in the woods. Quite a few knew each other and spoke of previous glories or looked up at the sky to discuss the weather. Some were earnest to the point of being lost in their own little world. Others looked around and sought communication with likeminded souls.

They were, quite simply, groupies of the Purple Emperor butterfly.

Last week this was all a bit of an eye-opener for me. It was my first time at Bookham Common and so never before had been exposed to this sort of adulation for an insect. On the first day I saw only the best of them, including a kindly gent who was full of local information and was keen for me to know exactly where to look and at what time I should be doing so. He knew all about the behaviour of HIM (His Imperial Majesty) and when I picked a male up above the canopy and was able to direct him to where it was perching in the open he was full of praise for my brilliant field work! He was of course being kind, it took no skill on my part to pick up such a large and stunning butterfly, but he made me feel a part of the gang. It felt good.

The following morning, back for more, I had the misfortune to meet his polar opposite. My attempt to regale 'this other gentleman' with my tale of having just seen a male Purple Emperor feeding on the ground was met by a dismissive wave of the hand and the curt words "I've seen hundreds." He carried on walking away as I was still talking. My 'polite' response, pointing out that his manner was not conducive to normal social behaviour, did at least get a rather flustered "...er, I'm in a hurry" from him. Twat.

These people are obsessives. They lurk. They know their quarry. And they made me feel many things. Welcomed. Surprised. Impressed. Confused. Annoyed. Afterwards I just had to go out and buy this book written by the chief 'Purple Botherer' Matthew Oates. And a fine read it is too.
at July 01, 2020

Blimey, didn't realise there were idiot twitchers in the butterfly world as well.

How have you never been to Bookham before, Steve? First Saturday of the month is the LNHS Field Day there, lots of friendly faces and helpful folks. Well, most years anyway, not sure what's happening this year. I had a Purple Hairstreak emerge from beneath bracken by the Master Oaks, it crawled onto my hand and was promptly battered off my hand by a Purple Emperor. Poor bugger hadn't even taken its maiden flight yet! Sad to hear it's become a bit of a circus nowadays, maybe lockdown has swung the bird twitchers onto butterflies instead? Shame if so. Really good for Brown Hairstreaks around IOW Plain laterin the summer and almost all the valezina S-W Frits I've ever seen have been at Bookham. They get Hawfinches too.....

Very well done Gibster, no one could complain about your particular effort, which has paid back every twitch you have ever been on.

Seth and Derek - no idea how I have managed to miss Bookham before, other places just got in the way I suppose. Having Purple Emperors closer to home most probably came into play. No doubt all aspects of natural history attract the obsessive and the strange...

Wow! His Imperial Majesty! What a regal name! What is the collective term for people who gaze at butterflies? Is there any particular season of the year to spot the Emperor butterfly? I would love to have more information. Is the Matthew Oates book available on Amazon? How much does it cost? Also visit at Water Sports activities