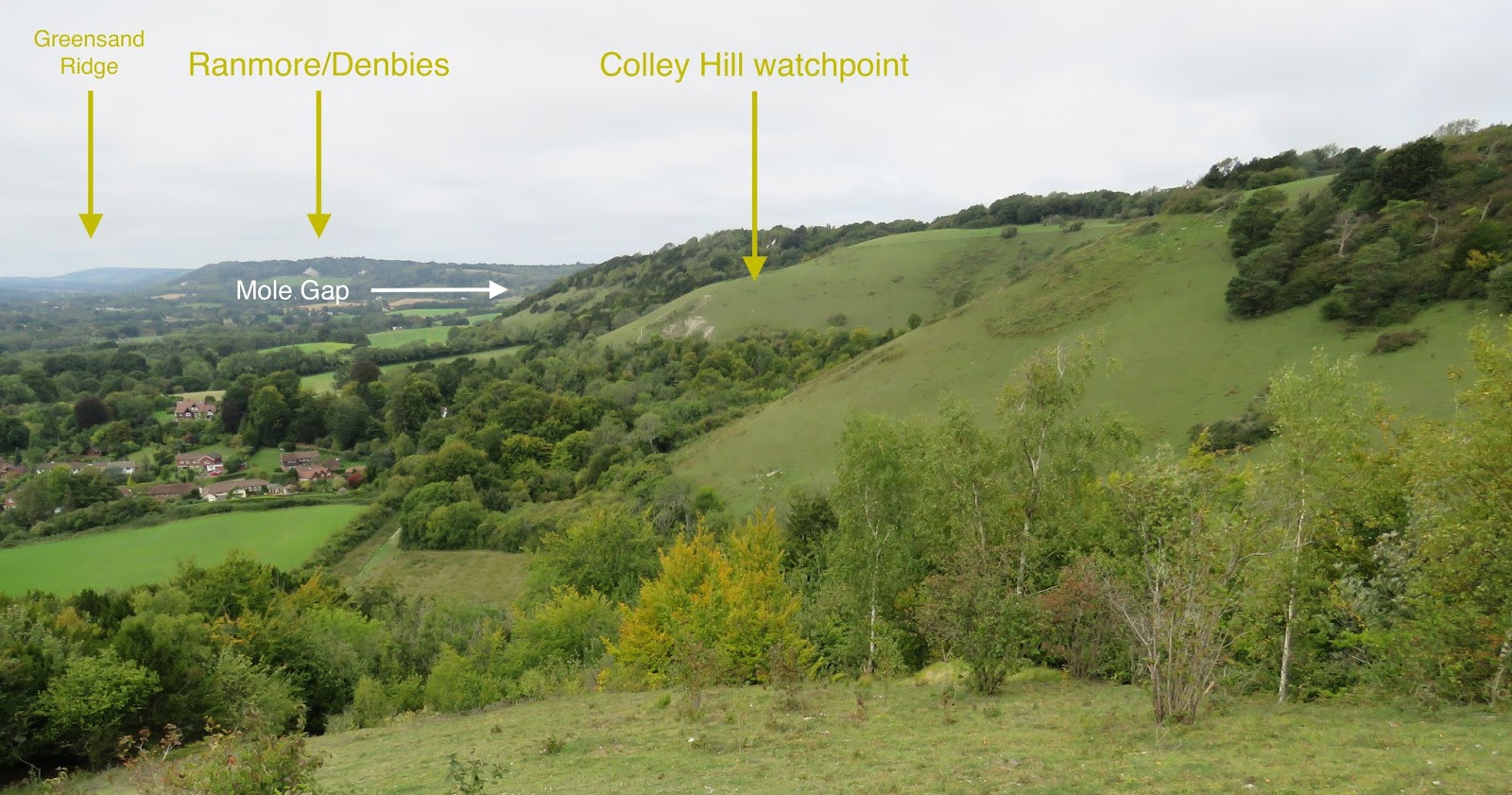 The photograph above was taken from the eastern end of Colley Hill, from a place where I have conducted several migration watches. As much as this particular spot has proved to be good, it is limited in seeing birds that are incoming from the east (unless they are south of the scarp) and very poor looking northwards. Yesterday I stood on a knoll at the western-end end of the hill (marked above as 'Colley Hill watchpoint') and was pleased to find that all-round visibility is much better, including a much improved northerly view.

In the distance you can clearly see Ranmore/Denbies and beyond that the Greensand Ridge. Between Colley Hill and Ranmore/Denbies is the Mole Gap, a place where the modest River Mole breaks through the North Downs. It is here that Box Hill will be found, another site that I have 'vis-migged' from, with some success.

Some thoughts on Box Hill: it is tucked in from the leading edge of the downs - will this mean that a number of birds coasting along the scarp will cut across to Ranmore/Denbies or even the Greensand Ridge, missing it altogether? I have observed birds coming into the Mole Gap (and heading north) having seemingly come off of the 'hillocks' that are found east of Dorking, the town that lies at the base - south - of Box Hill. Have these birds come via Colley Hill and altered course when seeing the gap? There are also a number of deep valleys just north from Box Hill, clear pathways to the Mole Gap. I have stood on these ridges and seen birds moving west and north-westwards (mainly thrushes, finches and pipits), no doubt having missed Box Hill altogether (diagram below). Again, have they come via Colley Hill? One big problem with watching from Box Hill is a total lack of northward visibility, the hilltop being heavily wooded and the scarp steep. Box Hill has proved its worth as a good place to observe thrush migration, but has yet to produce decent numbers of finches, pipits or hirundines. In comparison, Colley Hill appears to be better for finches. I have yet to be there on a thrush day.

In summing up, I'm getting to the point where I now believe that a lot of birds miss Box Hill - either heading further south to the Greensand Ridge (Leith Hill); by keeping on a line between Colley Hill and Ranmore/Denbies; or cutting in behind it. I am also wondering whether or not Colley Hill may well be better, although it will clearly lack any influence that the Mole Gap may have. There is much to learn on the North Downs here in Surrey. We really need a team of observers to be posted in several places throughout the autumn, making co-ordinated counts. You can always dream.
at September 09, 2020

Can you cycle there from where you live?