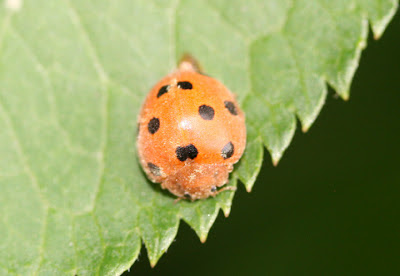 This poor, snatched photograph is, I'm suggesting, that of a Bryony Ladybird. I was wandering the border of Norbury Park and Bocketts Farm in north-west Surrey when I came across it. Not being an expert in beetles (or anything else for that matter) I was none the less struck by the washed out browny-red colouration of the wing cases and the carefully spaced out spots. It is found in the general area, having started its history in the UK as recently as the late 1990s.
at June 21, 2012

Very nice. After reading this last night, I had a dream and part of it involved finding lots of these somewhere!

Andrew, I wonder if you are unique in having a dream about so specific a ladybird species... To find one in Devon would almost be as surprising as Cunningham's Weevil!