I would like to report that I showed him everything that I mentioned as a possible tick. The truth is I showed him the area in which I expected to find the target species and he then looked down on the ground and said "There it is". That bloke has a sharp pair of eyes. We did go through the card without a miss - Roman Snail, Greater Yellow Rattle, Cut-leaved Germander, Ground Pine and Green Hound's-tongue. I will post tomorrow about these species as it is worth expanding upon, particularly the plants at Fames' Rough where a bit of land management seems to have paid off. With Graeme in tow, it also meant a notebook full of additional species that I would have overlooked or shrugged at - mosses, beetles, hoverflies, snails - a few extra pan-species lifers to take in at my leisure with the field guides and keys in front of me. 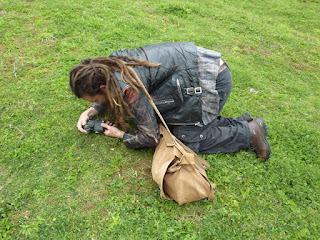 The picture above is of Graeme taking in the first (it was small) Cut-leaved Germander plant that we came across. There were, however, plenty of larger specimens to come. A cracking day spent with a knowledgable and most likeable bloke. We even took time out to disect the work of Terence Malick - you won't find him in Stace, by the way.
Cut-leaved Germander Ground Pine