June 25, 2012
A few days ago I was on Reigate Heath, walking across a boggy area littered with the stumps of recently felled coniferous trees. A black insect flew into view, at first I thought that it was a melanic damselfly. It landed close by and I was confronted with something that I had not seen before - a large ichneumon fly exhibiting a preposterously long ovipositor. It didn't settle for long, but I was sure that I could nail the identification. Back home my trawl through the literature matched it, I think, to a species of Lissonota - but which one? The popular field guides suggest setosa, or fundator, or 'many similar species'. The world wide web threw up many images of supposed Lissonata, some of which were clearly not, being dragonflies and even shieldbugs! (I came across another at Thursley Common this week (image below) which looked a lot smaller than my Reigate specimen. It didn't stay still for long). 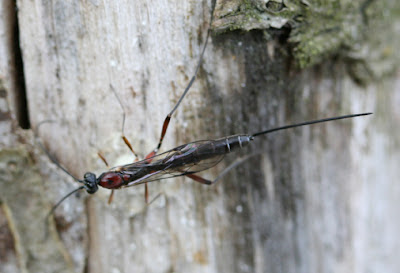 This neatly illustrates a problem that the 'official' recorders of natural history are faced with. There are thousands of people out there armed with digital cameras, all taking photographs of species and then posting/uploading them onto the internet and naming them in all good faith. Many are doing so correctly, but many aren't. So we then get a scenario where somebody (it could be me) who does not possess the literature with which to identify something and will go online looking for help. One incorrect labelling of a species can be replicated many times, which means that I could check my picture/specimen against a few sources and come up with the wrong identification. I would then perpetuate the miscarriage of id.

So we now have multiple records of a species that are not quite right - in fact, all wrong. The internet and generalist field guides can give the impressiuon that insects are quite easy. A plate of beetles suggests that you can match your specimen up to the closest pictures and voila... you have an identification. Oh dear.

I am certainly more wary now than I was a few months ago. I try to be squeeky clean with my records but can I honestly say that all of my identifications are 100% correct - that means every grass, sedge, crucifer, pug, tortrix, beetle? I doubt it. Where does that leave those who look after the official databases of our wildlife? Do they, in the case of critical groups, accept only those records submitted by known, proven fieldworkers. That would be safe, but would also mean an awful lot of genuine records will be ignored. It could also act as a deterrent to those 'new' to that particular field of study if the impression is given that their records are not worthy of consideration. 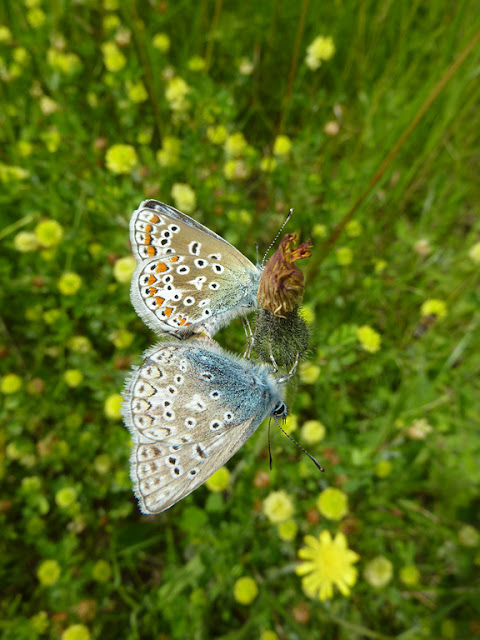 I end on a positive note -  a bit of Common Blue butterfly love-in at Howell Hill nature reserve in a rare sunny interval. Girls on top...
Common Blue

Skev said…
Know what you mean Steve and I'm as likely/guilty as anyone else in using tinterweb resources. Essentially though it boils down to finding reliable web resources, and also looking for multiple 'hits'. One thing to be aware/wary of is that when using Google (other web search engines are available) on search images mode, it will bring up all manner of stuff where the search term may well be included on the web page/site but doesn't necessarily relate to the image that comes up. I tend to avoid using other bloggers sites as ID resources per se - and I hope no-one is relying on mine!

When I submit any records, I fully expect to be challenged by more experienced recorders in their field if I am claiming something unsual or unlikely - I'd be disappointed if it was any other way.
25 June 2012 at 23:17

Steve Gale said…
Dean: if only such criteria applied just to ichneumons, it would be a lot easier...