June 06, 2012
Nestled in amongst woodland along the south-facing slope of Chipstead Bottom is an unassuming strip of chalk downland known as Fames Rough. To most botanists that name will immediately bring to mind two very rare plants - Cut-leaved Germander and Ground Pine.

It was during World War Two (when this strip of land was ploughed up for the war effort) that the buried seeds of both of these plants were kicked back into life and flowered profusely. From that time onwards a watchful eye has been kept on these rare plants. Neither of them like their habitat to scrub up, and will head back underground until the top soil is disturbed to create the open sward that they need. Regeneration of the surrounding vegetation has lead to spells in which they have largely failed to appear. In 2000 I can remember being overwhelmed by the number of Cut-leaved Germander plants present. Conditions were then good for them. However, two years ago I failed to find either species.

The Downlands Project has, together with interested parties, managed a small part of the area to try and maintain both plants presence. Fortunately the buried seed can stay that way for many years and still be viable. A light raking of the soil does not seem to be enough - a deeper toiling seems to be needed to awaken the seed.Yesterday, when Graham Lyons and I checked the far eastern end of Fames Rough we came across one such 'ploughed' strip (maybe 25m x 1m) and were pleased to find at least a dozen good sized Cut-leaved Germander plants (not yet in flower) plus one flowering Ground Pine (image below). We did not check further along. Whatever was done to this small strip has worked! I will return at the end of the month to take in what I'm sure will be a good flowering and to also look further along for more of these botanical gems. Congratulations is due to those who have enabled these plants to survive. 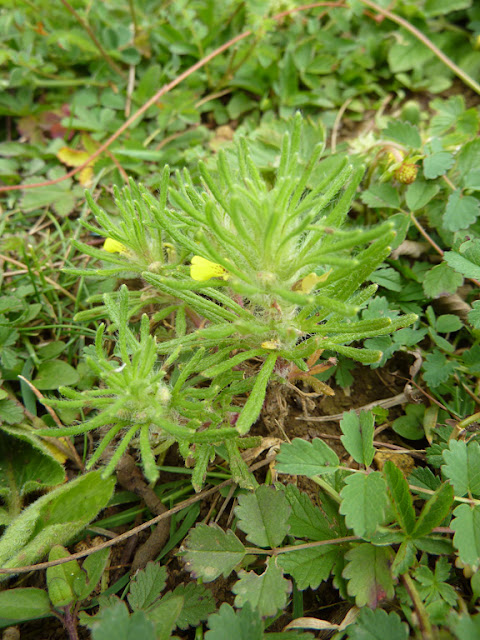