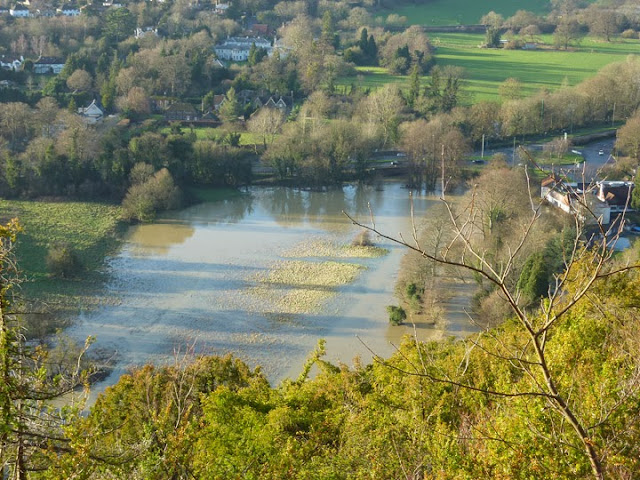 The picture above was taken from the top of Box Hill, looking down onto the River Mole at the Burford Bridge. The last time that the river burst its banks to such a dramatic extent was back in the late 1960s, so this is a rare sight indeed. The water had receded since this morning as the A24 (you can just about make out a few cars in the image) was apparently closed due to surface water. When we drove along it this afternoon, all was OK. Yesterday was a carbon copy of December 22nd/23rd, with high winds and a constant, heavy rain. More is promised in the next few days. I do feel for those who live in areas that are threatened by rising water - it puts our bit of water coming in through a side bay roof into perspective.

This morning I went to pay my respects to the wintering Firecrests on Banstead Downs. For the fifth winter running, between 1-3 birds have set up home west of the Banstead Downs Golf Club house, along a footpath with plenty of holly and ivy as cover. I saw two birds very easily, with much calling and hovering within a few feet from me. My attempts to record the event for posterity with my 'big boys camera' were poor - so poor that even I couldn't pretend that they were anything else but pants.

For some reason I've allowed myself to challenge Alan Tilmouth in a North v South 10k birding challenge (that being the distance from home that recording can take place in). His kingdom includes seashore. Mine certainly does not. he reckons on 180+ species. I reckon on 125. But, as all good losers say, it's the taking part that counts. I'll create a tab with my species tally at the end of the month.
Banstead Downs Box Hill Firecrest floods

Stewart said…
Is the challenge on foot Steve? If so Alan lives 6 miles from the coast so he will have a long shank to get there. I bet he doesnt do it very often... If it is motorised, his 10 km includes Newbiggin by the Sea, a site well known for migrants and vagrants...
2 January 2014 at 18:03

Steve Gale said…
I don't think it is just on foot - I'm happy for cars to be allowed, even if that means he can access rarity hot spots - he's going to win hands down however we do our birding. Mastered that camera yet Stewart?
2 January 2014 at 18:23