Ramularia purpurascens and should we care? 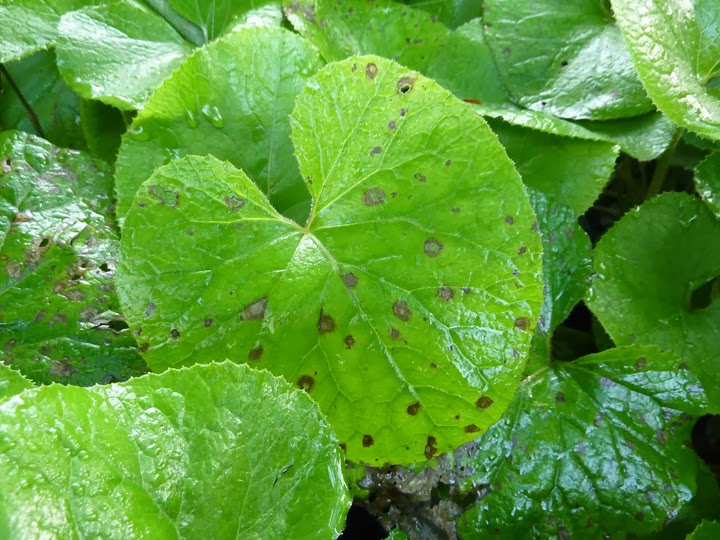 A couple of weeks ago I visited the River Hogsmill at Bourne Hall, Ewell. I posted an image of a flowering Winter Heliotrope which prompted the following comment from pan-list professional, Seth Gibson:

"I trust you saw the Ramularia purpurascens all over the Winter Heliotrope then?"

Er... pardon? Ram what? I had to Google it. Apparently it's an anamorphic fungus. Does that make it a mushroom, or some sort of shady version of one, like a rust or that white powdery stuff that appears in the superior fungi guides. They don't all look like Fly Agaric, do they...

Anyhow, I was back at Ewell briefly this morning, so I thought I'd better take a closer look at the Heliotropes (of which there was so much more in flower). And many leaves had obvious browny-mauve splodges on them, with paler centres. A bit of internet detective work suggests that I had, indeed, captured Ramularia purpurascens.

There are literally thousands of species out there, in our gardens, parks and woods, that are so unobtrusive (or just plain hidden), that we ignore them - well, obviously Seth doesn't. These are as much a species as anything else, even Wallcreeper, and as such deserve to be looked at and studied. It might not be showy, but is as much a deserving life form as you and I. If you see any Winter Heliotrope when you are next out, take a look at the leaves and prepare to bow before Ramularia purpurascens!
Bourne Hall Ewell Ramularia purpurascens

Unknown said…
This is one of the least satisfying ticks on my list. It took some time before I found a specimen I could have something tangible to look at microscopically and the evidence was so miniscule that I had to seriously crop an image taken through a compound microscope at 600x magnification. It doesn't really hold a candle to Tichodroma muraria.

Gibster said…
HAHA!!! I've been offline all week and only just seen this, and you posted it on my birthday too! So cheers for the extra birthday prezzie and I'll try to make the next one a tad more exhilarating for you! :D
29 January 2014 at 21:08