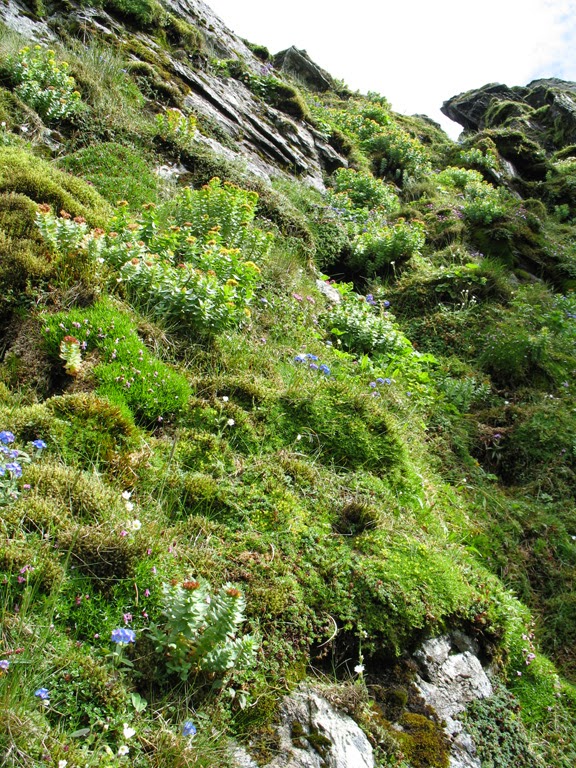 Ben Lawers had attained a mythical status with me due to 'Tales of Botanical Wonders', told by Barry Banson. I needed to go...

From my guest-house bedroom window, the hilltops were obscured by cloud, but there it had been dry and mild, so it was with some surprise that when I got out of the car at the Ben Lawers Visitor Centre it was not only windy (force 6) but also cold enough to need gloves and a woolly hat.  I didn't pause much during the first hour of the ascent, the habitat above the nature trail being a monotonous swathe of Heather, Cross-leaved Heath, Bell Heather, Tormentil, Heath Bedstraw and Bilberry with various grasses in-between. However, a series of path-side ditches held appreciable numbers of Starry Saxifrage together with Common Butterwort, Lousewort and Hare's-tail Cottongrass along with Mat-grass (the food plant of Mountain Ringlet).

My first new 'alpine' of the day occurred at a fairly low elevation - Alpine Mouse-ear. From here, this species was common all the way to the summit. As elevation was gained some of the species that were common lower down started to disappear, such Wild Thyme, Tormentil and Heath Bedstraw. Wherever a dribble of water could be found so to was Starry Saxifrage, along with a lesser amount of Mossy Saxifrage. Instead of carrying on the path that summits Beinn Ghlass I contoured around it on its western flank. Just before joining a narrow path (that navigates its way through a collection of low rock faces), there is a small pool. In this general area two species became quite common - Cyphel and Moss Campion. Both were flowering freely and were easy to find all the way up to the 'hanging gardens' underneath Ben Lawers summit.


As I skirted these rock faces I finally entered the cloud. At once I became soaked by a fine mist. It was like botansing in a bathroom shower underneath a blanket of cotton-wool. I deferred searching this area until later, although a Fir Clubmoss stopped me briefly. After a further uphill climb at last I came to an area of level ground. To the left of me was the path to the summit of Lawers. To the right, the summit of Ghlass. But, taking a deep breath, I walked straight ahead into the fabled area of the 'hanging gardens' on the cliffs underneath the summit of Ben Lawers...

What should have been a dramatic first view of the delights ahead were lost in the swirling mists and hampered further by a screaming force seven wind. I had been sheltered somewhat from the elements by Ben Ghlass's shoulder, but now the weather could get at me unimpeded. What part of me that had remained dry now became very wet indeed as the drizzle had become rain. Every so often the fog-like cloud parted for a few seconds to reveal the way ahead. A boulder strewn grassy rise led up to the cliff base but it was not until I was close to this wall of rock that I could appreciate the size of it towering above me. The maelstrom gave the mountainside a forbidding persona, a roaring shriek seemingly emanating from the vertiginous weeping rock. I found the 'botanists path' that hugs the very base of the cliff and held on to the vegetation hanging over the lower shelfs. Slippery under foot,  with the wind grabbing at me, I was aware of the steep decent below and was reminded of this every now and again as the swirling cloud broke up to reveal my fate should I fall.

Close up, the flora of the cliffs was amazing. My first scan in front, and above me revealed Alpine Forget-me-not, Roseroot and several plants of Alpine Fleabane which got me most excited. I edged along the path, having to keep bracing myself against the wind. Hoary Whitlowgrass was scattered about, Mountain Whitlowgrass not so common and Green Spleenwort tucked into the odd fissure. As I went to grab onto a ledge to negotiate a tricky section of the path I looked down and there, inches from my nose, was a perfectly formed Rock Speedwell, two flowers facing me like precious gems growing out of the mountain. Of all the special plants on Lawers, this was the one that I most desired. Retreating to the boulder fields below I hunted between them in relative shelter. There was plenty more Alpine Forget-me-not, Holly Fern and Brittle Bladder-fern. The mountain sub-species of Thyme-leaved Speedwell was common, but I couldn't find any Alpine Speedwell at all.


Although the weather suggested otherwise, I decided to go all the way to the top, at 3,984 feet Scotland's tenth highest peak. By now the cloud was heavier, but the drizzle somewhat lighter. My elation with the success at the cliff carried me up to the munro marker, where in force seven winds I stood with several 'munro baggers' looking out and imagining what the view would be like if it wasn't for the cloud. But I had places to go and had to move on. I wandered 200m beyond the summit and, with precise directions, found a boulder strewn ravine in which several old shielings lay in ruin. Behind one such wall, in short turf, were several plants of Dwarf Cudweed. Carrying on into the ravine, with visibility down to no more than 30m, I struggled to make out the landmarks that I knew would lead me to Drooping Saxifrage. Perseverance paid off as I found several rosettes along with Alpine Saxifrage and Rock Whitlowgrass.

After a couple of hours in this world of half-light and botanical riches, I started to descend, finding other targets on the way, such as Three-flowered Rush, Stiff Sedge, Russet Sedge, Alpine Meadow-rue and a single Alpine Sawwort. I had failed to find one plant that I really hankered after, one that would only open its flowers in sunshine, and that was Alpine Gentian. I would need to come back on another day to see that...

Stewart said…
Fantastic post Steve, and excellent pictures too. I might be inspired to have a look up there myself one day. So many things to see and so little time...
19 November 2014 at 20:09

Steve Gale said…
Thanks Stewart, it's a wonderful place surrounded by many more wonderful places. Well worth going. If you do I can let you have plenty of site information.
20 November 2014 at 18:41

Gibster said…
Beautiful - if I was in charge of your top ten, this would be all the way up there at number one. Without a doubt. Cheers Steve. Catchya soon, buddy!
8 December 2014 at 23:59