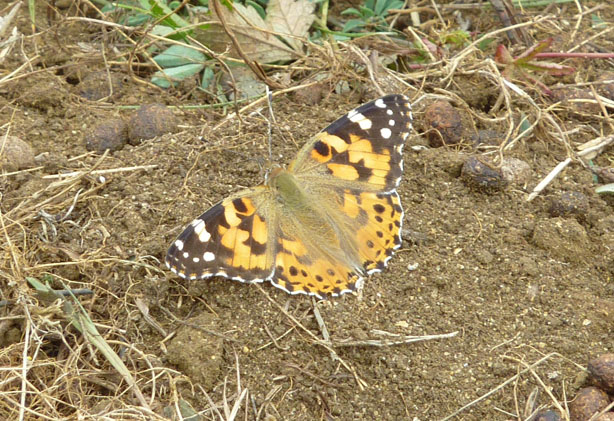 Here in Banstead it's sunny, warm and muggy. There has been single Silver Y and xylostella in the MV and a Painted Lady has briefly alighted on a patch of Red Valerian in the front garden. I'm getting a strong feeling of deja-vu... (cue shimmering visuals)

On the morning of 7th June 1996 I was surprised to see 10+ Painted Lady on the front garden Red Valerian (yes, the very same patch) - there had been just the one the previous day. I was still slightly dazed from processing the MV catch, which had provided a Gem (!), 25 Silver Y and 23 xylostella. It was the first night that more than one migrant species had been recorded that year. Needless to say, my switching on of the MV that evening was done with much anticipation. I was not to be disappointed.

When I inspected the trap the following morning I felt as if I had been transported into a parallel universe, as a glance at the very first egg box revealed THREE Bordered Straw. What was going on? And there were another three within, together with 93 Silver Y, 48 xylostella, 5 noctuella plus a single Dark-sword Grass. I wandered around the garden in a state of shock. That same afternoon I visited the meadows in nearby Nork Park, where, in an hours trawl of the three fields, I recorded 2,000 Silver Y, 50+ Painted Lady and 2 Clouded Yellow. Unbelievable!

Over the next few nights the trap still enticed good numbers of Silver Y, xylostella and noctuella, a further 2 Bordered Straw turned up on the 11th, with singles on the 12th and 19th. As the month wore on, the migrant numbers died away, although the odd Pearly Underwing joined in with the festivities. My little bit of north Surrey had become a coastal headland for a few precious days. I'm still waiting for such a concentration of migrants to happen here again.
at June 05, 2015

I have been anticipating just one of the many Bordered Straws currently present in the UK. All in vain though.

Steve - did the autumn, of that same year, produce any Great Brocades in Banstead? It was only my third season of running a garden MV trap and, what with the unpresidented arrival of migrant Dragonflies, the previous year, the 1996 moth influx was sort of lost on me - until so much later. I had been very lucky to have been in East Kent during this spectacular period for insect migration. - Dyl

Hi Dyl, no, I didn't get any Great Brocades here (and have still only seen this species at Dungeness). I was lucky enough to be at Dungeness the weekend of the great 1995 dragonfly immigration - as you say, spectacular!

My friend and I walked the track from the car park at Elmley to the scrapes, and kept count of how many we saw. I forget the precise date, but the numbers stick in my mind. Every 100 metres we were logging somewhere in the region of 1,000 insects. It was *insane*. And this was a conservative estimate. They carpeted the trackside and the fields beyond.

And, happy reminiscence, I twitched Dunge in '95 (from Wye, so not a huge twitch!) for the dragonflies. Ace. Happy days!

Hi Jon. That dragonfly invasion was special, wasn't it! I saw yellow-winged (80) and vagrant darters, black darters (first for Dung), Camberwell Beauty, Tawny Wave (rare migrant moth) and a Laughing Gull, all in 48 hours on the sacred shingle.

Our paths must have unknowingly crossed, Steve, as I saw much of that list - but not the Tawny Wave nor, significantly, the Camberwell Beauty. Wah. The latter hurts. I'd sell a minor organ to find one of those bad boys in the UK.

Well Jonny, there's plenty of us that dream of finding one - I was but a bystander for the Camberwell Beauty, but I settled for that without any difficulty at all!