The rise of the gull people 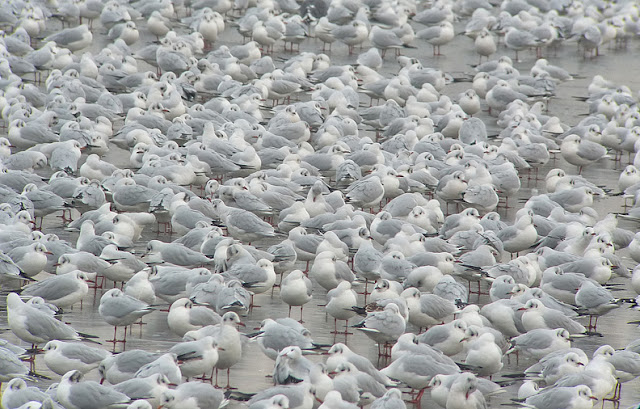 There was a time when gulls were largely ignored. They were regarded as pure ornithological filler, something to be tolerated in-between 'proper' birds coming along. Admittedly, a Sabine's, Glaucous or Iceland Gull might have raised an eyebrow, and something like a Ross's would have caused a stampede, but otherwise it was a case of stifling a yawn and looking the other way. Oh how times have changed...

Early pioneers of advanced gull identification (such as Peter Grant) really were breaking new ground. Up until the 1970s most birders baulked at the idea of trying to identify any large immature gull. It was a challenge enough to be able to separate Common and Ring-billed Gulls. Some people still struggled with immature Kittiwakes and Little Gulls. But when it was pointed out that, with a bit of patience and a keen eye, even the most uninspiring of gulls could not only be identified to a species but accurately aged as well, a few birders sat up and took notice - but when I saw 'a few' I really do mean a few. Most of them (alright, I'll be honest, most of us) still pretended that gulls didn't really exist. Unless they were easy to do, that is. And rare.

But those early adopters got stuck in. Across Europe a small but dedicated band of observers started to slowly unravel the complexities of gull identification. But the deeper they delved, they found that more questions and conundrums were thrown back at them. They found racial differences (which sometimes became new species). There were a bewildering number of hybrids. Some gulls, even when looked at forensically by experts, defied identification. Pandora's box had been opened, but these observers didn't want to put the lid back on it, they wanted to climb inside.

Somewhere along the line, gulls became sexy. They were the domain of the hardened birder -the serious birder. If you were into gulls then you had passed through to a higher plane. A moral high ground had been attained. But many still struggle with them. Too much like hard work. Not fun.

If you go along to any well known gull spot today, you will come across birders looking at them - no, not looking at them, studying them. Grilling them to within an inch of their identification and ageing. Dungeness is one such place and each weekend there must be up to a dozen such souls armed with fish offal and bread to entice the gulls in. Close views to obtain detailed photographs. Detailed photographs to pore over plumage detail and accurately read any rings on legs. Caspian Gulls have now taken on the status as the guller's icon. They are currency. Kudos. Status. During my recent stay at Dungeness there must have been 15+ of these gulls, including seven on one day. Two were Polish ringed and one came from East Germany. They were only outnumbered by those men tossing guts and crumbs into the air, big lenses swinging by their sides, eyes wild with anticipation and devotion.

The gullers are starting to take over the ornithological asylum.
birding gulls

Dylan Wrathall said…
Steve - this is not a new concept, although I agree that the modern devotees are at another level. My own copy of Grant's Gulls (2nd edition) is the result of my time spent at Brogborough and Stewartby lakes in Bedfordshire where I spent time in company of some of the astute observers of all things "Larid" related. It was a real eye opener - these guys were streets ahead of any of the Kent lads I met when I first arrived in 1993. Times change and things move on - the present generation of Dungeness lads would make a certain Mr P. Grant very happy - Dyl
16 November 2015 at 19:19

Steve Gale said…
Dyl, I'm very aware of the birders who grilled reservoirs and harbours up and down the country, throughout the 80s. The boys of today have never been so prepared thanks to these early pioneers.
16 November 2015 at 20:40