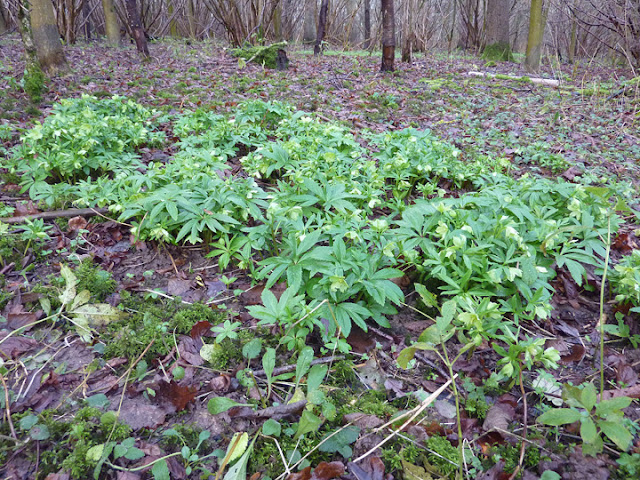 Today saw the annual animal inventory take place at London Zoo - the keepers get together and count all the creatures that are within their care. I know it's most probably an age thing, but when I think of a zoo keeper I just see an image of Johnny Morris in my mind, peaked cap, leaning on a broom and talking to an elephant that talks back to him in a funny voice. If you are under 50 years of age you won't have a clue what I'm on about. It passed for entertainment back in the day...

Last year the final tally came to 17,480 of 756 species. I thought that I'd join in, so I took myself off to Langley Vale Farm and counted every bird that I saw in a three hour period. My (more) modest total was 1,277 of 38 species. Woodpigeon was by far the largest component (510). Highlights included 5 Red-legged Partridge and 3 Marsh Tit.

Botanically I paid my respects to the patch of Green Hellebore (above) that had come on a treat since my last visit in December. Also of note was a robust clump of Butcher's-broom (below). 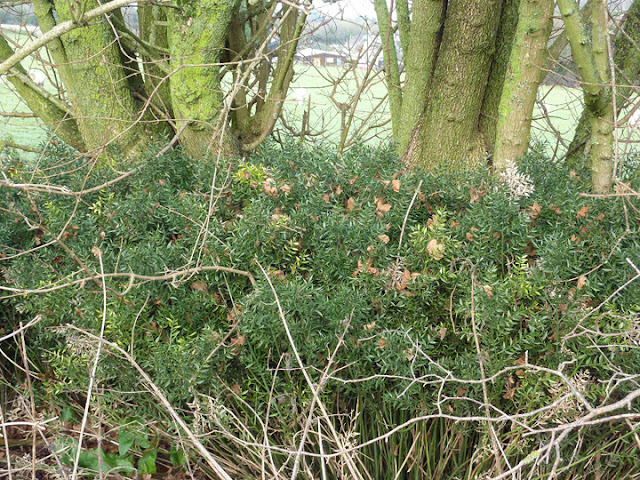 This defied close examination as there was a waist-high barbed-wire fence, deep ditch and crumbling bank between me and the clump in question. This is an odd plant, with the stiff, pointed leaves not being leaves at all, but flattened shoots. These bear the single, diminutive pale flower. You will have to imagine it, but the scene above was full of flower. The English name apparently comes, as implied, from butchers, who cut the mature stems and bundled them together, using the stiff, hardy 'leaves' to scour and clean chopping blocks.
Butcher's-broom Green Hellebore Langley Vale Farm