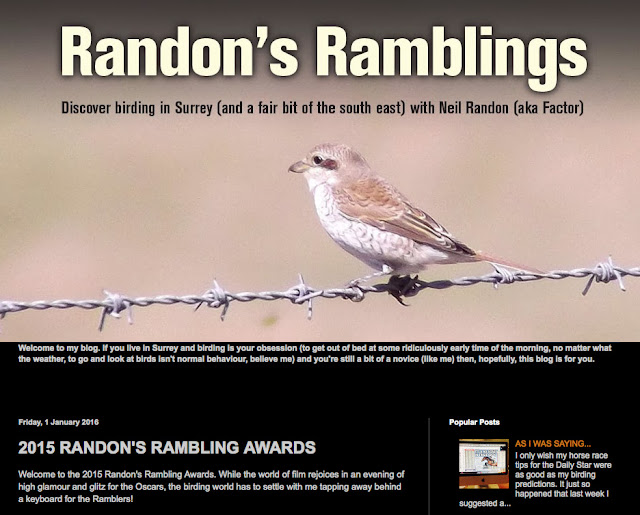 At the beginning of each year, Neil Randon (Surrey-based birder / journalist / designer / blogger), sits down at his desk and casts an eye back over the previous twelve month's worth of birding and blogging. After much consideration (and refusing to be put off by cheap attempts at bribery) he announces the winners of his much vaunted, much desired and increasingly difficult to win 'Randon's Rambling Awards', affectionately known as 'Ramblers'. Click here to find out who (or where) won which category, including an exciting new one.

I'm far too modest to mention who won the 'Birding Blogger of the Year' award for the third consecutive year, or who came runner-up in the inaugural 'Birding Blog Post of the Year'. I'm also far too aware that if (a) Gavin Haig actually carries on blogging; (b) Jono Lethbridge posts a bit more; and (c) Neil reads more posts from a certain Darryl Spittle, then my days of success are severely numbered.

Thanks to Neil's good taste, immaculate perception and continued acceptance of my envelopes stuffed with tenners, the post that I was going to publish today is not yet needed, and is sitting smuggly in a folder, awaiting its release sometime tomorrow. But before it gets a public airing I will need to re-read it, polish it and possibly add to it - it is going to be very hard indeed to hang on to my Rambler!
at January 01, 2016

Well done on the hat-trick Steve, I was really impressed with your wild flower meadow blogs last year and the glorious photos that accompanied them.

Thank you Derek, I only hope that those meadows are as good again this year.

Thanks for the plug, Steve. The cheque's in the post...