Colley Hill in readiness for Spring 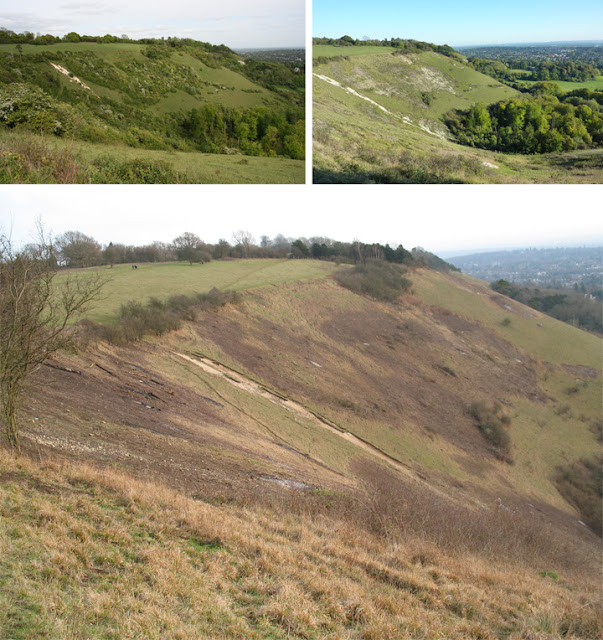 At this time of year, especially in dull and wet weather (like today), the top of Colley Hill is not a particularly inviting place. Although on chalk, this high ground above Reigate gets very wet and muddy after a lot of rain, which makes walking on the steep slope reminiscent of taking part in a particularly sadistic obstacle course. In a few weeks time this slope will be covered in violets, then milkwort, and beyond that home to various orchids, butterflies (including Silver-spotted Skippers) and who-knows what else. It might be uninviting at the moment, but it will come into its own very shortly.

The images above show off the work that has been done (and still is being done) to reduce mature growth on the steep southern slope. Top left is 'the before' and top right 'the after' shot, both taken over previous summers. This work, which was begun by a team of humans with hand tools, has been carried on by a herd of Belted Galloway cattle. The main shot gives a pretty good idea of what it looks like now. This will produce plenty of new habitat for specialised chalk downland plants and invertebrates, something which we need to recreate where it has been lost, and also to give a helping hand in keep existing downland in pristine condition.

Roll on the spring..
Colley Hill

Derek Faulkner said…
What a great looking site and fab views. Bet it can get hot in the summer down in those valleys.
22 January 2016 at 14:41

Chris Janman said…
Very much enjoying occasional visits to your blog Steve, as is my old mate Mervyn Jones, now ensconsed in Pembrokeshire, long time no see, perhaps see you at Pulborough Brooks one day,Regards Chris.
25 January 2016 at 20:03

Steve Gale said…
Bloody hell Chris, long time no see indeed! I can remember you flogging off your BWP Vol1 to buy a guitar. Stewart Holdsworth always said it was the most sensible thing that anybody ever did with that particular publication... and yes, it would be good to bump into you at Pulborough.
25 January 2016 at 20:40

Fleetwood Bird Observatory said…
Those Belted Galloways don't half do a good job in conservation grazing. I have used them on sites to 'open up' rank grassland to create more suitable habitat for breeding waders in the uplands. Enjoyable post as always Steve.