Back again to Pulborough 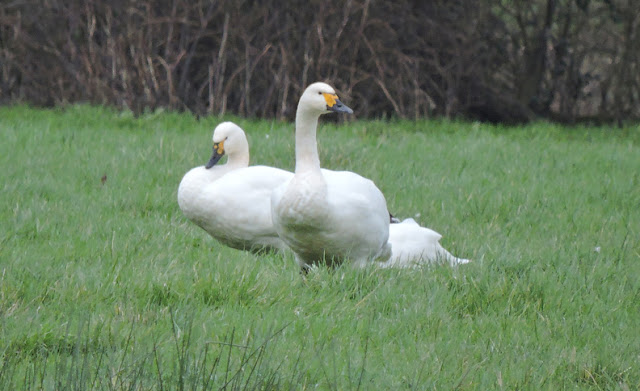 I had so much fun at Pulborough Brooks last week that I went back and did it all over again...

This time, armed with a bit of local knowledge (thanks Mr. Winder!), I started off at Hale's View about an hour after first light. Two birders were already in position, standing at a gate and looking out across at a most stirring sight indeed - thousands of Lapwings. They were quite restless and skittish, with much calling and taking to the air in broken flocks. An immature Marsh Harrier then decided to fly through the airspace, sending at least 2,500 Lapwings into a heaving panic. In amongst them were four Ruff. Apart from the waders the air was also full of duck, as they too decided that large raptors were not to be tolerated overhead. Wigeon, Teal, Shoveler and Pintail burst above like some wildfowl-themed firework. It was some spectacle. The birder standing alongside me casually mentioned that he had the wintering Great Grey Shrike in his scope. Did I want to take a look? Yes please. Distant, but acceptable!

I did a sweep of all the reserve hides and viewpoints, once in the morning and again in the afternoon, finishing up where I had begun, at Hale's View. The Black-tailed Godwits stole the show once again. They were all peacefully roosting on the close islands just off from Jupp's View, so allowed relatively easy counting. I reached 1,110 before running out of birds to count. There would have been more tucked down and out of view on the far side of the island, but I could only count what I actually saw, as tempting as it was to 'bung on' an estimate.

In the middle of the day I went off-site briefly to take a look at eight adult Bewick's Swans that had joined a few Mutes on flooded meadows close to Amberley Castle (above). This really is a splendid area.
at January 25, 2016

Fantastic numbers of birds, those! Never seen so many in my life, probably.

sounds like a great day ! always loved the Pulborough/Amberley area , theres usually Sibe chiffchaff at Greatham treatment works & often Barn & Short eared owl from Greatham bridge ..really must visit myself its been a year or two

Geoff, for an inland area, it's like being by the sea... if you know what I mean!

A brilliant place Steve, it used to be one of my favourite stamping grounds before I got hooked on the shingle. Back in the eighties it wasn't unusual to see 120+ Bewick's in the Arun Valley.

I thought that you used to plod around this area Martin. So much habitat and yet just a relatively small band of birders covering it. Plenty of scope here...