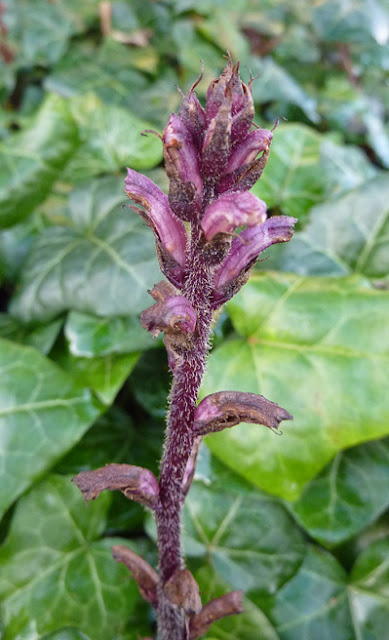 Ivy Broomrape (Orobanche hederae) has a distinctly south-western distribution in the UK, although there are a few outposts in the south-east of England. These latter populations are thought to be introduced (due in some measure to the artificial habitats in which it is found) although there is the chance that some of them might be wild. I am lucky enough to have this species present in several places close to where I live, the most celebrated of which is at Devonshire Avenue Nature Area, in Sutton. In addition to these, I discovered a substantial population nearby, some 15 years ago, while walking along the western side of Brighton Road. At the Bonchurch Close junction is to be found a mature, deep and well planted bed that extends for maybe 75m alongside the pavement. It is populated with mature trees (including Yew and Cherry Laurel) and is copiously overrun with ivy, particularly at ground level. The raised bed (bounded by a stone wall) brings the 'ground level' up to a convenient height. It was here that I first saw a few spikes of Ivy Broomrape, and watched the 'colony' grow over the following years. The plants are well spread out along the bed's length and can number several hundred spikes. Some winters see the remnant spikes still showing well, while in others (such as this winter) few tend to show. Whether the old spikes are showing, or not, I can normally find fresh flowers at any month of the year. Last Wednesday I happened to be in the area, so took a look. There were three newly minted plants, the best being photographed (above left). The Sutton area is well blessed with broomrapes - I can find Common Broomrape in several places (even in town flower beds) and the local Knapweed Broomrape at Howell Hill NR (a Surrey Wildlife Trust reserve) where it haunts the chalk grassland in very small numbers.
at January 15, 2016

We aren't so favoured here in the East Mids

Steve,
I'll take a stroll over to North Foreland and check out our local colony - I don't think I've ever seen it in full splendour? Could warrant a, very tongue in cheek, post?

Broomrapes are not particularly easy to come across Simon. Let us know if you do.

I'd love to see a Dylan post which has a plant as its main subject matter!!!!!

Sent you an email old bean

Got it yesterday evening and also replied then Neil. It appears in my sent folder. Have you not got t?