Yesterday I awoke to a vision of proper winter - at least half an inch of snow had fallen in north Surrey, covering all surfaces and looking particularly pretty before it would no doubt get messed up by moving cars, excitable children and the promised gradual thaw. I decided to visit the RSPB reserve at Pulborough Brooks in West Sussex, an easy 45-minute drive which got greener the closer I got - the snow had more or less petered out by the time I reached Billingshurst.

The reserve is a lovely mix of habitat, with wetland, farm, wood, scrub and heath. There is a most agreeable cafe and visitor centre at the top of a hill (with a shop that sells a good selection of natural history books and optics), with a gentle stroll down to four hides and several viewing platforms. Not surprisingly, with all of the recent rains, the brooks were heavily under water.

I had started off in the West Mead hide, that coincided with a volley of gun-fire from further down the valley. This resulted in a mass panic amongst the wildfowl present, including a noisy throng of Canada Geese that appeared from the direction of the guns. The duck wheeled around for a couple of minutes before settling down again on the northern floods, and this made getting an estimate of the numbers present a bit easier. I reckoned on there being 1750 Wigeon, 1000 Teal, 650 Canada Geese and 40 Pintail (with a handful of Shoveler also mixed in). How accurate were these counts? See later...

I carried on northwards along the edge of the flood, adding species to the notebook and happy in what I was doing. This really is a joyful place to bird. A Dunlin called in the distance, a Peregrine appeared high above, a Common Buzzard messily flapped low over the water, pushing up duck ahead. From the Hanger viewpoint a mass of waders took to the air over on the Pulborough side of the floods, all black, grey and white - Black-tailed Godwits. How many? I reckoned on at least 450, maybe 500. Some spectacle. Some under-estimate (see below). Ending up in Nettleys hide, I was entertained by a Water Rail that fed out in the open and was not spooked by any sudden noise that came from the hide, that included squeaky viewing flaps, banging doors and heavy footfalls.

Back at the visitor centre I bumped into Pulborough-stalwart Jon Winder, who I hadn't seen for a good couple of years. Jon is always a good source for local information and told me the best place (and time) to see the wintering Short-eared Owls. After lunch and coffee back at the car, I returned for an owl quest. I didn't have to wait long, as two birds were hunting along a grassy bank outside of Winpenny hide. A growing crowd of appreciative birders had me leaving for a quieter place, which turned out to be the Hanger viewpoint in the company, once more, of Jon. It was here that the Black-tailed Godwits took to the air again, and I took a few shots with the camera. This is one of them: 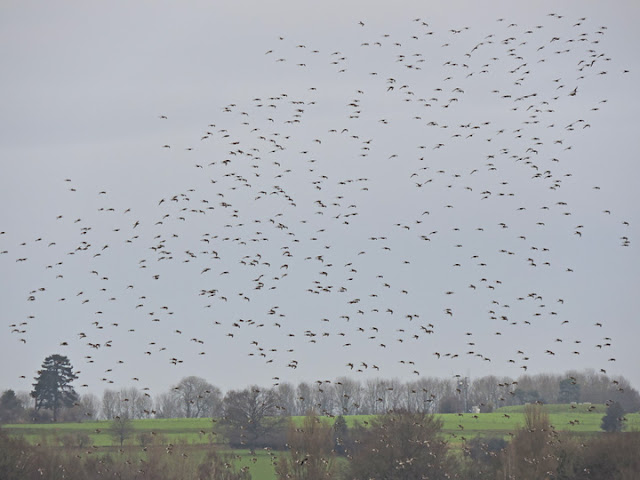 Again, Jon and I thought that there were 450-500 present. When checking the images on the computer yesterday evening, I thought that our estimate might be on the low side, so, with obviously too much time on my hands, I counted each and every one of them. I counted in batches of 100, marking each bird as I went along so not to duplicate, in two colours to be able to clearly see each 100: 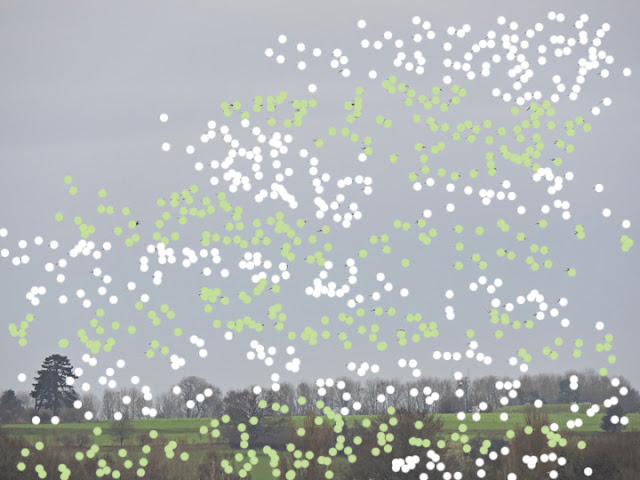 As you can see, 8 distinct bands of 100 birds, plus another 28 white dots in the bottom right-hand corner. And this wasn't all of the flock. I think I can safely say that there were at least 900 Black-tailed Godwits present. I have always known that when I estimate flock sizes, and can then check that count more accurately (either because the flock lands, or from a photograph), I have always gone for a lower number than is actually there. So at least I know my counts will always err on the side of caution. The godwits finally settled on a number of islands off from Jupp's Viewpoint, where I then went and took the top photograph from.

I will be back!
Black-tailed Godwit Pulborough Brooks

Derek Faulkner said…
Blimey, even tho I may err on the low side I'm glad I don't have to do that exercise on the PC every time I do the monthly WEBS count.
Much easier doing the monthly Harrier Roost count last night when I had just two male Hen Harriers going into roost.
18 January 2016 at 09:54