Lost Among the Birds 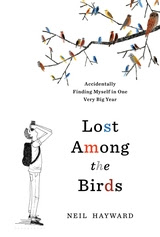 A Big Year is very much an American creation. Here in the UK there are plenty of birders who have had a serious go at competitive year listing, but it is really the poor relation to the Stateside version. For a start, the area in which to list is much smaller. There are fewer species to seek out. The logistics of travel are not as difficult.

There is a literary tradition of Stateside birder's attempts to see how many bird species they can find in a calendar year. Roger Tory Peterson kicked it all of when he wrote 'Wild America' which told of his lengthy trawl across America with Brit James Fisher in 1953. They ended up seeing a then giddy total of 572 species. Ken Kaufman followed this up with 'Kingbird Highway' in which his 'on-a-shoestring' attempt of 1973 was told, and a new landmark of 666 species was set. Mark Obmascik's 'The Big Year' was written as if a suspense novel, as he revealed the story of 1998s three -pronged attack on the record, the players being Sandy Komito, Greg Miller and Al Levantin. The first named blew the others out of the water, setting a new record total of 748 species.

Having read these books, the appearance of another account of a 'Big Year' did not immediately entice me to get my money out, but having read the blurb on the book jacket I was enticed to do so. Here was an ex-pat living in Boston who took the Yanks on at their own game and won! 'Lost Among the Birds' by Neil Hayward is a lot more than a book about the highs and lows of a year's manic birding. Approaching his 40th birthday, he had given up on a highly successful career, had come out of a relationship and finally admitted to being depressed. He was lost. His only comfort blanket was to go birding, and through that he started to put his life back together. He didn't intend to do a Big Year, but found himself being carried along on a tsunami of rarity, stunning landscapes and the unexpected warmth of birding strangers who soon became friends. It became as much a medication as the little white pills that he was swallowing on a daily basis.

It's a painfully honest book. It is also a rollercoaster read as we join him on an unpredictable journey across the North American land mass, chasing down Sandy Komito's record, whilst also searching for a brighter future. Highly recommended.
at July 01, 2016

Email ThisBlogThis!Share to TwitterShare to FacebookShare to Pinterest
Labels: birding, Lost Among the Birds, Neil Hayward

Thanks for the recommend Steve, I`ll put it on my birthday list. I too enjoyed The Big Year, and even sought out the film at the Curzon in London - we were the only two there! There seems to be an increase in the natural history book genre of late. You`ve probably read, or are aware of them already, but some of the recent ones I`ve enjoyed so far this year are as follows: Coastlines by Patrick Barkham, The Running Hare by John Lewis-Stempel, Mountains of the Mind by Robert Macfarlane (this guy is a genius, he could make the telephone directory interesting!)and Claxton by Mark Cocker (in progress, a good bathroom book as lots of short, snappy entries). I`m loving your flower exploits by the way. Cheers, Paul

Hi Paul, I too am a fan of Macfarlane. I will look into your recommendations as well - thanks!