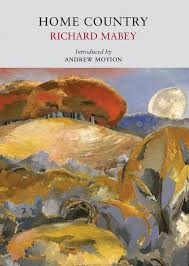 ND&B's first book recommendation of the year is Home Country by Richard Mabey. I have to confess to being a fan of the author, with his Nature Cure being one of those books that I am forever re-reading.

Home Country is, simply put, an autobiography of his early years. He grew up on the edge of the Chilterns, in Berhamstead, Hertfordshire. A sensitive and, maybe, precocious child, he grew up exploring the natural world around him, and experienced one of those idyllic childhoods that seemed to automatically be bestowed on those born into relative comfort in the 1940s, 50s and 60s. One of the reasons that this work resonates with me is because I grew up, in similar circumstances, just down the road in Tring.

Climbing trees, making camps, forming gangs, walking for miles (and all day) across and through woods, commons, streams... it is the sort of life that our youngsters today are largely removed from. Even when the author became a young adult, he still followed this 'Famous Five' way of life, by spending increasing amounts of time on the Norfolk coast, either on a boat or in an old warehouse at Blakeney. He got to know that denizen of the east bank at Cley, Richard Richardson, and we are also regaled with some birdy tales from that time. The inspirations for his breakthrough book (Food for Free) came from the time he and his Norfolk friends spent in the persuit of wild foraging, and even the need to relocate to an office on the western fringes of London did not dim his enquiring mind, the result being The Unofficial Countryside. Turning freelance followed, and the last section of the book concerns his return to the Chilterns, and the purchasing of a small wood. The joys and problems of such action are laid out before us.

Little Toller are the publishers, and as with all of their books is a thing of care and beauty. Long may their reprinting and repackaging of considered nature writing continue. I'll leave you with just a brief passage, describing the Grey Herons that gathered in the valley close to his Hertfordshire home during a drought one summer - the book is full of such gems.

"They are skulking in trees and picking their way through what is left of the grass. I watch one through binoculars as it changes one sullen roost for another. It flies up heavily to the top of an ash tree, crumples like a parachute, then shifts it weight onto one leg and freezes. The other birds are scattered about the meadows in similar poses - necks craned forward, waiting. They look awkward and misplaced, fish-eaters out of water. Suddenly they are up and flying together, like a tattered sail over the stubble".
at January 12, 2017

Steve, sounds good. On the strength of your recommendation I've ordered a second-hand copy of the hardback edition through Amazon. My recent reading has been an eclectic mix, including 'Tangles With Pike' by Dominic Garnett, and 'Half Man, Half Bike', a biography of Eddy Merckx by William Fotheringham. A Nat Hist oriented memoir sounds like just the ingredient to add!

Steve, like Gavin, I have also trolled the Amazon book sellers and ordered a copy. If it even comes close to Blood Knots, then it will be money well spent. The fact that it is based around a childhood in Berkhamsted should mean that there will many places with which I am familiar - Ashridge, Roughdown Common, Bovingdon Brick Pits and the Grand Union Canal? Places where my own journey of discovery started.

I've just ordered a new copy of the paperback version through Amazon. Hopefully it'll be as per your recommendation, I've been trying to read a similar book by Richard Adams and found it disappointing.

A pity such magical childhoods are but a forgotten dream now

Not if you read the books Simon.

Gentlemen, I hope that none of you are disappointed with it. If you are, ask Mr. Mabey for a refund...

That sir, is a very artful cop out!