A shard of light 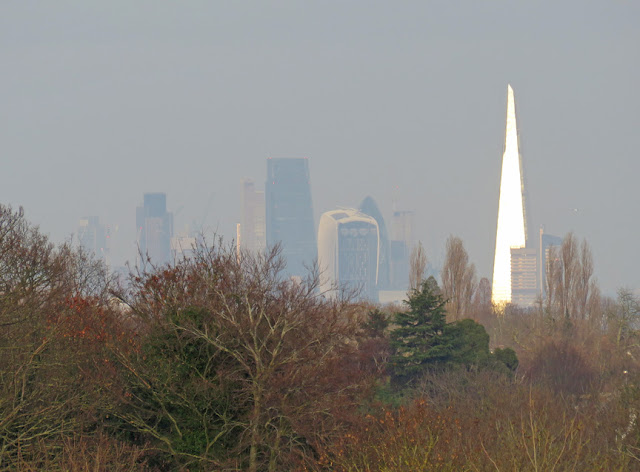 I am keeping a birding year-list for the first time this century. A low-key list admittedly, not driven by trying to reach a huge total, more a case of adding a side-show to my endeavours during 2017. I know I'm not taking it too seriously because:

1) I considered going to Crawley to see the long-staying Rose-coloured Starling (a drive of maybe 40 minutes), bit remembered that the bird appears on rooftops on a housing estate. Not for me that little scenario...

2) There is a Stejneger's Stonechat at Dungeness. It has been present since early November. It has had its faeces analysed by men in white coats who have declared it to really be one. And since New Year's Day several hundred sheep year-listers have trudged along to year-tick it. Not for me either, I'll wait until all the fuss has died down - which runs the risk of it disappearing before I make the effort.

If I were being serious about all of this - chasing my largely south-east English 2017 bird list - I would have hoovered up both by now and been onto the next big thing. But no, gently does it. So where did I go this afternoon? That hot bed of ornithological riches, Priest Hill! You can tell my efforts are idiosyncratic...

Undoubted highlight was a Woodcock, flushed from a scrubbed up meadow. There were three female Stonechats but I could only find two Reed Buntings. To distract me from all of this birding malarkey, a shaft of silver in the distance resolved itself into the UK's tallest building, The Shard (above). To its left I could also make out The Gherkin, The Walkie-talkie and The Cheese-grater. All these are nicknames given to the buildings by us ever-so-clever and say-what-you-see Londoners. The postman delivers the mail to far more prosaic addresses. Priest Hill is about ten miles from them, thus the camera is lying by suggesting that they are all just round the corner.

In other news: That kind Mr Randon has bestowed upon this blog a fourth consecutive accolade. You can read all about it, and the other winners, by clicking here. Thanks Neil!
at January 03, 2017