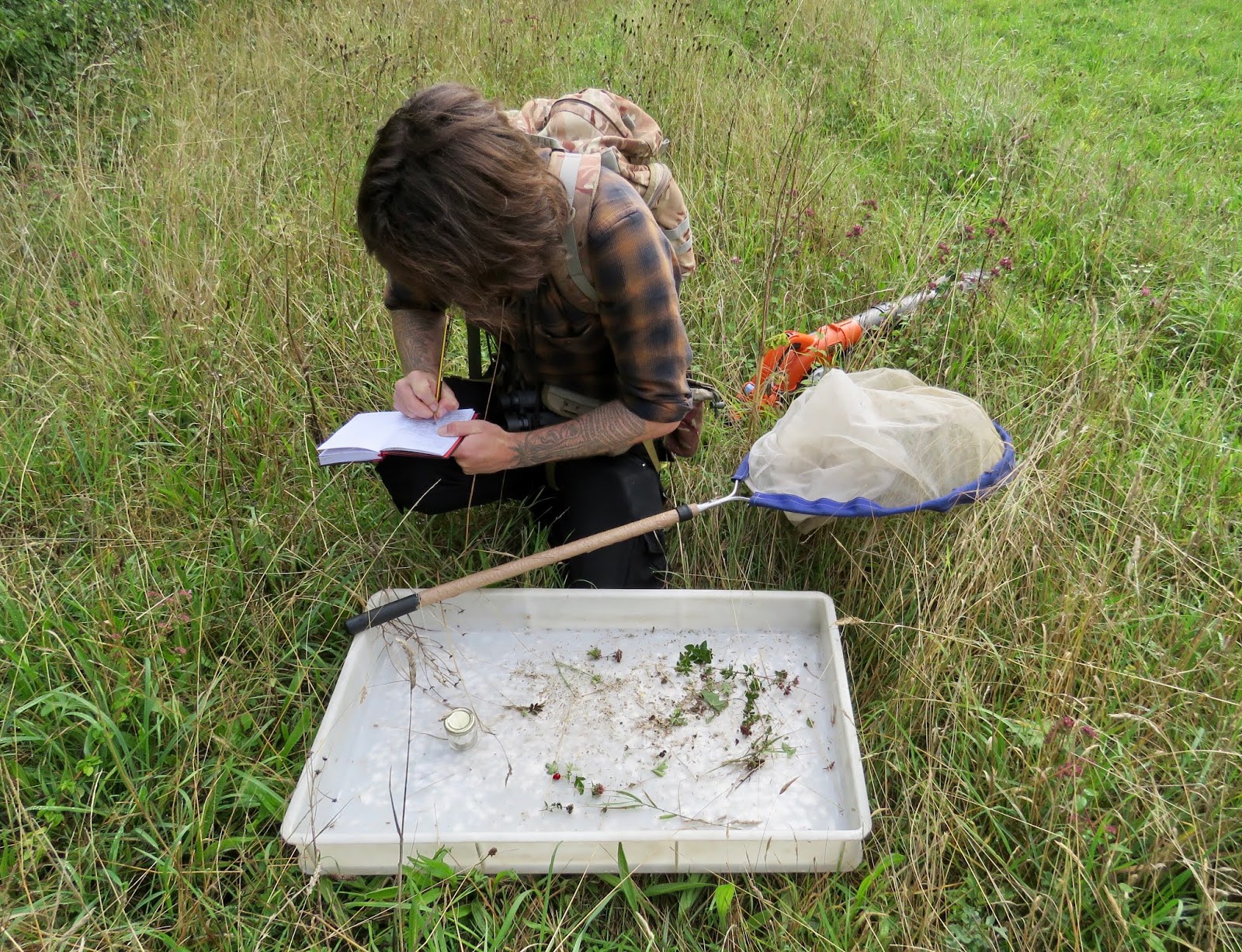 It was a pleasure to once again meet up with Sussex-based freelance ecologist and all-round good bloke Graeme Lyons (you can visit his highly instructive and entertaining blog here). He has been conducting an invertebrate survey at Chipstead Bottom over the summer, and invited me to accompany him on his latest session yesterday. I jumped at the chance. Graeme's natural history knowledge is exceptional and his desire to encourage and inspire others to look at all the natural orders is infectious.

We met at 09.00hrs. It had been over six years since we last met, but immediately struck up the easy going relationship that we had previously enjoyed, chatting non-stop during the following seven hours as I followed him around, watching the master at work. Graeme was armed with a sweep net, suction sampler and beating tray, utilising all this equipment (plus more) to entice the myriad of hiding invertebrates out into the open, ready to be catalogued and identified. There were five sections of the valley to survey (chalk downland/grassland with a single woodland control sector) each timed to an hours search.

Each emptying of the net or suction sampler into the beating tray saw tens - sometimes hundreds - of beetles, spiders, bugs, even moths - to scuttle away to the corners of their temporary holding cell. Graeme wrote everything down in double quick time, calling out each one for my benefit, suddenly stooping down with hand lens to confirm identity if needed, at other times taking a specimen for further analysis at home. He actually took very little, testament to his field knowledge, honed over many years with the Sussex Wildlife Trust. He kindly pointed out relevant identification features, gave me an indication as to the invert's status and habitat requirements. I couldn't possibly take it all in, but was promised a full list of the day's haul, one which will allow me to reacquaint myself with the species that I was shown, at my leisure. Maybe some of it will actually stick!

The time flew. Each sweep or suction revealed yet more, and by the time we finished plot five 165 plus species had been identified, and there will be a few more to come via Graeme's microscope. As we wandered along his eye's were everywhere - bees, hoverflies, galls - all written down on the move. He earns his money. 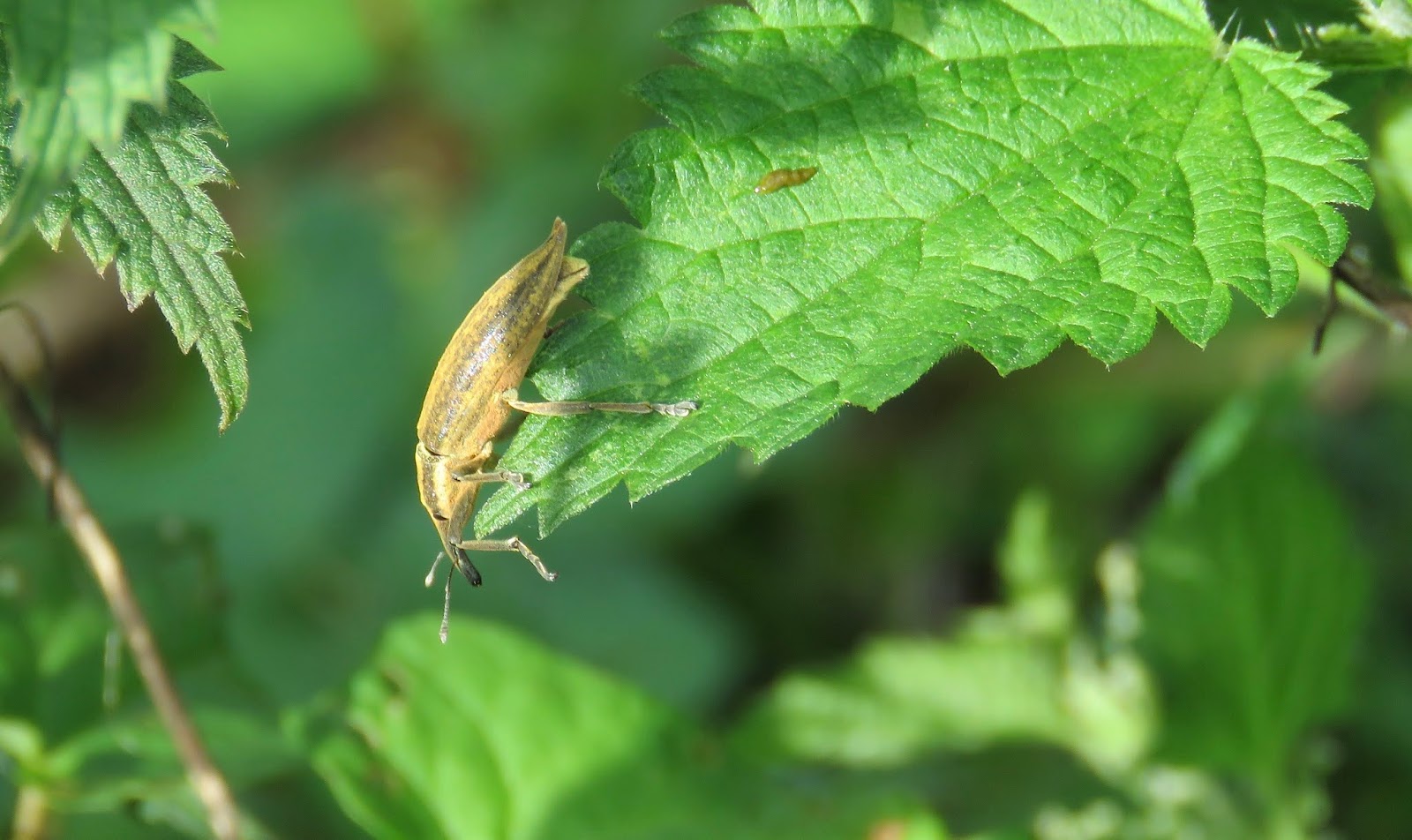 After we had finished, we took the short journey to the edge of Banstead Downs to visit the site of the giant weevil, Lixus iridis (above). I had seen this species back in June (here and here) so was able to pay Graeme back a little by taking the lead to try and locate this rare invert for him. Within 10 minutes I located one hiding behind a stem of dead Hogweed. After we had admired this most striking of weevils, Graeme showed his professional prowess by then locating a further six individuals, all on nettle close to the dead Hogweed stems. Three of these finds came in comedic double quick time while we were searching for a pair of reading glasses that I had dropped.

Possibly the highlight of the day came at the very end. A sweep of a nettle bank (to try and locate more iridis) brought out a cry from Mr Lyons as he looked inside his net. Within it was a nymph of the Striped Shieldbug (Graphosoma italicum), another rare invert and possibly the first nymph of this species to be recorded on mainland Britain (below). It was a fitting climax to a most instructive, inspirational and enjoyable day. 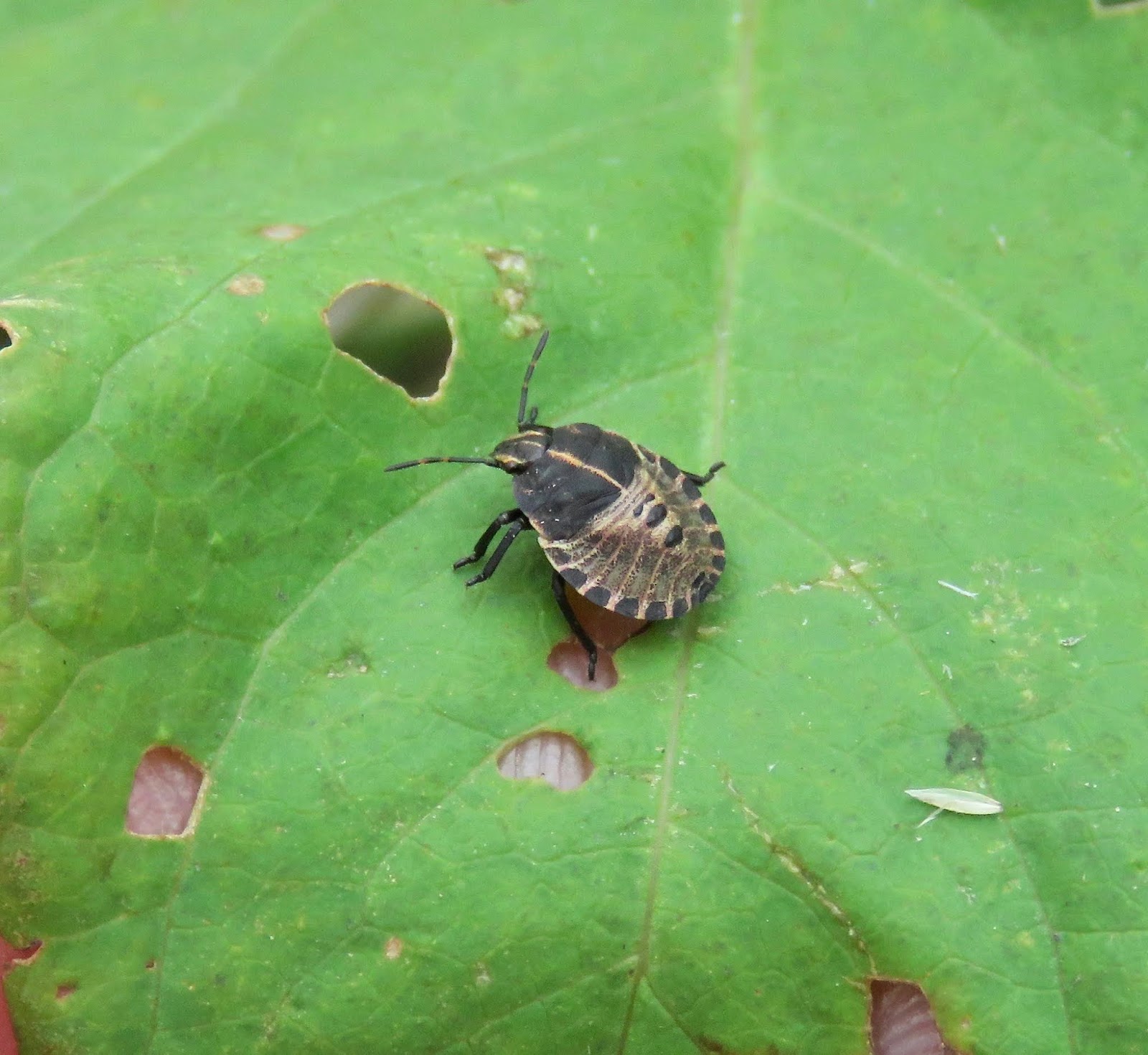 ONE HUNDRED AND FOURTEEN LIFERS?!?!?!?! Holy smokes, Skev will be doing his absolute nut haha!

I did feel a bit sheepish Seth, never been a fan of Pan-listing tourism...

114 ticks out of c165 recorded in the field - outrageous. I'm not doing my nut at all - I'll keep happily picking up stuff and pottering along.

114 out of 200 after Graeme had done a bit of homework. Not proud, but it is a great way of learning.