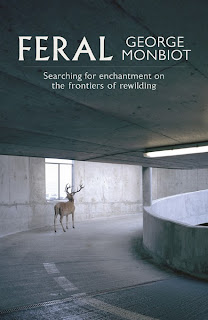 A couple of posts ago I mentioned that I was reading Feral by George Monbiot. Last week I finished it and can not recommend it highly enough.

In simple terms, the author puts forward his case for the 'rewilding' of large tracts of Britain. Most of upland Britain is, in his words, 'sheep wrecked' - over grazed. This results in a barren landscape where the naturally occurring plants are reduced to a mere handful of species. The survivors are the few that are unpalatable to sheep, with only the very steepest slopes safe ground for vegetation to take any hold. Needless to say, such a habitat breakdown has a knock-on effect across all wildlife, affecting species numbers and composition.

I have witnessed the destruction caused by sheep and deer at Ben Lawers in Scotland. By the visitor centre there is a burn that comes down from the hillside, meandering through a shallow depression. This has been fenced off to allow the vegetation to regenerate. You are allowed to wander through this area and the species diversity and lushness is so much grander than the impoverished grazed area outside of the fencing.

Monbiot argues that the eradication of the top predators (the keystone species) is what ultimately brings down the environmental deck of cards. The loss of the wolf, for example has lead to a surge in deer numbers, which now overgraze the woods and, with no predators, wander far away from their natural woodland habitats, unchecked. Mammals such as wolves, boars and beavers carried out essential functions within the natural world which allowed diversity and healthy habitats to flourish. They kept the population levels of their prey down, they opened up undergrowth, they kept river water clean and running properly.

His depiction of what we have lost (mainly in northern Europe but also across the world) is mind-blowing, particularly his account of the teeming sea life that was once found around our coasts. I had no idea that the death-knell had started to be sounded so long ago - it is not just a recent phenomenon. The demise of the megafauna may have been helped along by climate, but man had more than a helping hand in the process.

This is a thought provoking book. Reserves are, he claims, maintained in a fashion that try to keep alive a man-made 'ideal'. Most of our reserves are, in fact, guarding non-natural habitats. We strive to maintain (or get back to) population levels that were present at the beginning of the 20th century. The error in our ways is that these levels were already greatly suppressed. The author is not just spouting out his vision of an ideal world - he tackles the financial costs, the cultural effects and the realistic hopes of what might be achieved. Some of our European neighbours are already giving rewilding a go, and it is working. The biggest problem for such projects to get off of the ground here is getting the public to be at ease with creatures such as the wolf and lynx making a return.
Feral George Monbiot

"The reintroduction of wolves has reportedly increased biodiversity within Yellowstone National Park. Along with (and partly because of) an increase in new-growth vegetation, such as aspen and willow trees, which has resulted from the reduction in elk numbers but perhaps more importantly, their dispersal from valley bottoms and open meadows where they grazed collectively and avoided predation from mountain lions and bears prior to the return of wolves. The aspen and willow were able to recover, in part, because not only was the elk population reduced because of predation due to the wolves, but they quit venturing as deep into thickets due to the fear of being attacked by wolves in an area of very low visibility. This process of top predators regulating the lower sections of the trophic pyramid was dubbed, "the ecology of fear" by William J. Ripple and Robert L. Bestcha[9] In addition to the restoration of vegetation several important species such as the beaver (which had also become extinct from the park) and red fox have also recovered, probably due to the wolves keeping coyote populations under control."
17 September 2013 at 19:28

Gibster said…
Yeah, but those very Yellowstone Wolves are being hunted the moment they set foot outside the park. Which, thanks to increasing pack size, they do quite regularly. I think your point "The biggest problem for such projects to get off of the ground here is getting the public to be at ease with creatures such as the wolf and lynx making a return" should be re-worded to read "the biggest problem for such projects to get off the ground here is getting the animals to be at ease at being returned into a vastly different environment from which their ancestors were forcibly driven" and they were exterminated for reasons which still exist in today's world. It's all good and well to whack a few beavers into a remote, secure lochan in the middle of nowhere. Productivity is low, they haven't been allowed to spread very far. Try containing predators. Far-roaming predators. Big, cunning predators. Not at all sedentary, in fact (have you seen Jurassic Park, lol)

Maybe "wolf moors" or "lynx forests" are the only way forward, in the same vein as grouse moors protect the birds and their habitat (don't get me started on THAT particular subject...)

Hmmm. Wolves. Maybe, just maybe, they could add a much needed spot of interest to Simon King's annual musings on how Cassius was usurped by Caesar before that young whelp Nero burst onto the scene and stole every doe within 5kms.

Enough, I shall return to my bottle of red. Rewilding is a fantastic concept though. I recently attended a recording weekend at Knepp in Sussex, Charlie Burrell is the character behind it all. A thoroughly fun and dedicated chap. His estate is amazing. Rewilding can make such a difference in a just a few short years.
18 September 2013 at 22:26

Gibster said…
There was a certain Puma that put in a temporary residence on Epsom Common. It kept leaping out and attacking dogs. A police marksman took it out - eventually. Apologies for the above drivel, I was very, very drunk milord ;)
20 September 2013 at 00:50