Of moss and men 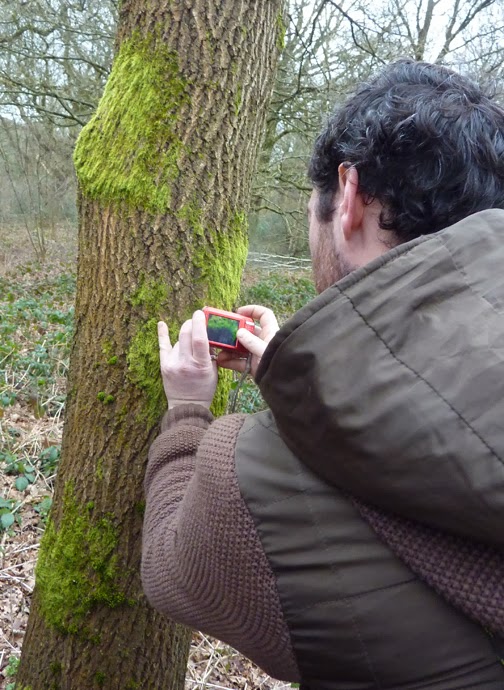 I spent a most enjoyable day on Epsom Common, taking part in the LNHS bryophytes field meeting that was lead most successfully by Peter Howarth. As a virtual beginner in this area, it was most instructive to be shown a succession of common species and being talked through the identification of them in an unhurried and patient way. My scribbling into a notebook of the latin names was aided by clear annunciation, as my transcribing was done phonetically and not one name caused me a problem when I deciphered my notes this evening. I won't list them all here, suffice to say that I was most probably shown 45+ species. Now comes the hard part - going through my mosses and liverworts field guide, to try and ensure that some of what I've been shown today will stick.

I was doubly fortunate as I finally met up with all-round good bloke and fellow pan-lister Seth Gibson (that's him taking a picture of a tree trunk full of bryophytes). His sharpness in the field was regularly demonstrated, as he showed me species after species that I would otherwise have walked past - highlights such as the fungus Bracken Map and the silk tubes formed by the micro-moth Infurctitinea argentimaculella, which feeds on Lepraria lichens.  I am constantly reminded of my own shortcomings when I meet up with such people...

After almost six hours of moss bashing I had become punch-drunk. However, today has helped to demistify the world of the bryologist, just enough to give me some hope that I can modestly tackle these fascinating life forms.
bryophytes Epsom Common liverworts moss

Gibster said…
I ain't half glad I put that coat through the wash last week else I'd look a right scruffy oik!

Very good to meet you too (at last) Steve. But anyone reading this that think's Steve's in any way bumbling, inept or not as sharp as the next fella is very mistaken.

Steve Gale said…
Thanks Seth, my move to employ you as my agent has been vindicated! And grey hairs add to the aura of being wise - they had to stay in.
24 February 2014 at 08:13