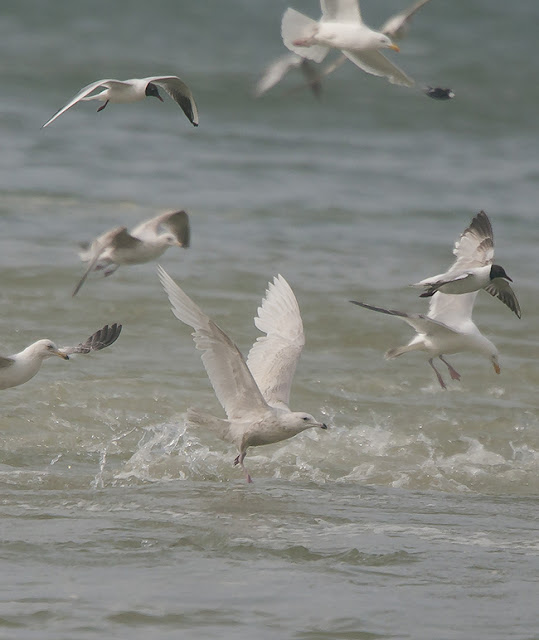 On the 27th May, Dominic Mitchell found a first-summer Glaucous Gull at 'The Patch', Dungeness. This was soon photographed by local laridophiles Dave Walker and Martin 'Ploddingbirder' Casemore. Both the DBO website and Martin's blog published several images of the bird that evening. On 29th May the gull was still present and was still considered to be a Glaucous. However, by 30th May, and with further field observation, Dave was not so happy with its identification, and stated that he felt the bird was more likely to be an Iceland. Martin, on the other hand, was still in the Glaucous camp, although did admit that this individual was "odd and not the normal brute of a bird associated with Glaucous." Yesterday Martin posted further images of the gull, plus a video, to which he commented that "in the video it appears to (be) an Iceland Gull, yet yesterday's images seem to me to lean towards Glaucous." On the same day, the DBO website was referring to the bird as an undoubted Iceland. One of Martin's images, with his permission, is shown above.

First up, these guys really know their gulls - I mean, REALLY know them. They spend hour upon hour each week - no, EACH DAY - scrutinising them. Not much gets the better of them, and if something does appear a little odd and starts their alarm bells ringing then there's a bloody good reason for that happening (as the immature Audouin's Gull of two autumns ago proved). What I find most comforting about this incident is that, if the top boys can still be momentarily baffled by a gull, then when the rest of us mere mortals struggle with the bloody things, it makes me feel a whole lot better about the situation. I'm not so shit after all... (but still shit compared to DW and MC, I will concede). The bottom line is that even the most rabid and proficient of 'gullers' are still in the process of learning - they'd be the first to admit that. Gulls are not the precise art that some of us might believe.

Gull identification has come on leaps and bounds in the past 30 years and is still accelerating. The realisation that we are knee-deep in 'new' species, that all ages can be identified with almost 100% certainty and that extra-limital records of rare gulls are not as rare as was once thought, has brought about an increase in gull mad birders. They are a certain type of birder - part cult, part geek, part scientist - who are extending our identification capabilities with their dedication and patience. Not that long ago immature gulls were largely left alone and we had never heard of Caspian, Heuglin's or Armenian Gulls. Today we (OK, mostly others) actively look for them.... for days on end. And with patience, even if they don't find those species mentioned, they will find something else. Maybe something like a Glaucous Iceland Gull...

STOP PRESS: Dave Walker just tweeted that 'that damn gull (is) still at the patch. Confused but now think it is probably a hybrid - presumably Herring x Glaucous. About time it departed!'  Well, if it has got to Mr Gull like that, there's no hope for the rest of us!
Dungeness Glaucous Gull Iceland Gull

DorsetDipper said…
I once saw a flock of about 50 White winged gulls in Iceland one December. I had my binoculars but no scope. I had no idea about most of them.

I think most hybrid claims are false - just my personal prejudice, no facts. Apart from Viking Gull, but that doesn't look like Viking Gull - primaries just not dark enough?
3 June 2016 at 20:09