The start of a banal, pointless Top 12

June 12, 2016
A few posts ago, I suggested that if I were to produce a list of my favourite plants, it would be an act of banality.

So here it is.

I managed to make a list of 24 species, which I whittled down to 12 without too much difficulty. Rather than going with the conventional Top 10 you're going to get a Top 12 - you lucky, lucky people. As always, if I were to produce this list next month (or, to be honest, tomorrow), it would most probably change. So, for the first post, and in descending order:

12. Henbane (Hyoscyamus niger)
This species was, in my world at least, a myth for an awful long while. I just never came across it. The feeling seemed to be that it pops up out of the blue, stays but briefly, and disappears just as quickly. Plus it isn't common in Surrey. There was also 'something of the night' about it, not just the species ghostingly brief appearances, but its veined petals, apparently foul smell and, last but not least, its poisonousness. Possibly a plant that came from an evil or alien place... 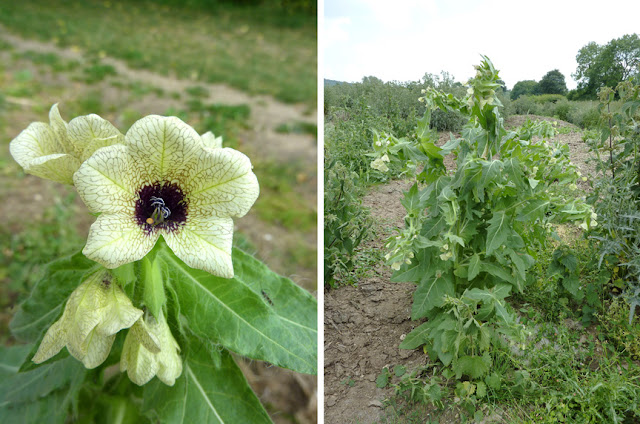 My first meeting with it came as one big surprise. On June 26th 2010, whilst out on a family walk along the banks of the River Mole close to Mickleham, we came across a farmer's field that had been filled with all sorts of muck and slurry the previous year. The bare sloshy mess that I had seen a few months before had became a mass of vegetation, including some 20+ strange looking, large, fleshy, trifid-like plants. They looked decidedly odd and not a little disturbing. I think I knew what they were in an instant. A closer approach confirmed them as Henbane! And they did not disappoint.

Since then I have not clapped eyes on another. A return visit to the same field the following year revealed lots of neat grass but no Henbane. Its mystery is still intact.
Henbane plants

Derek Faulkner said…
Looking forward to seeing if any of our favourites match. I've only seen Henbane once in my life and that was many years ago at Dungeness.
13 June 2016 at 05:48