This is a very local species in the SE of England, and I have only seen it in two places - Thundry Meadows (Surrey) and - yes, you've guessed it - Dungeness (Kent). In fact, the latter site is the only place in Kent that it is found. It is having a very good 2016 on the shingle, with clearance work across the northern part of the bird observatory recording area having opened up habitat enabling it to flower for the first time since 1984. There are other sites nearby, such as the Oppen Pits on the RSPB reserve, where a discrete population has endured. 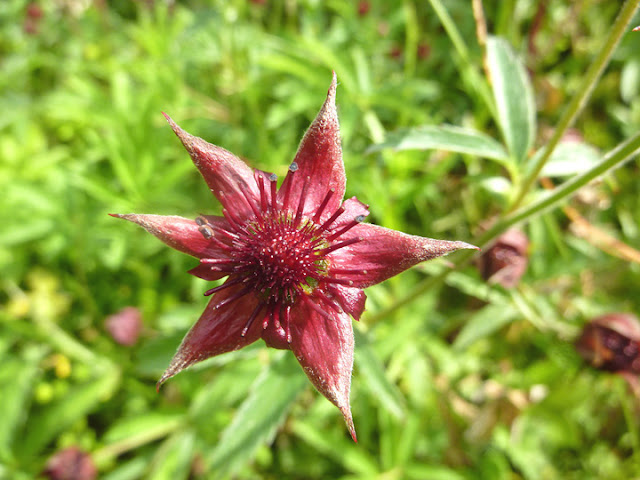 I was entranced by the flower long before I saw it. Not many have such a colouring - a cross between Ribena and red wine. And not many look as if they were the product of someone skilled in the art of soft furnishing. My first encounter with Marsh Cinquefoil was on a misty June dawn at Thundry Meadows, and I was not disappointed. Even in the half light it shimmered at me, an exotic flower in a bed of sedge and rush. It was some years later that I saw the species again, at the Oppen Pits, Dungeness.

Part of the reason for the high positioning of Comarum palustre on my list is down to an association with one of the magical places where I have seen it. The Oppen Pits are the only natural water source at Dungeness and are away from public access. I was given permission to visit them in 2012, when I hadn't been there for over 30 years. I chose a beautiful sunny and warm day in July to revisit, and one of my aims was to see this plant. I found plenty. The mix of maroony-red flower and deep green vegetation is a plush feast for the eyes - there is something slightly alien (even disturbing) about it, an out-of-placeness that just adds to the thrill of coming across it. To seek it out it is best to head to the north and west - and take a pair of wellington boots with you...

Derek Faulkner said…
Wow, that's a cracker that I wasn't aware of. We're getting a very good display of flowers on the Shellness beach at the moment as well.
27 June 2016 at 12:07