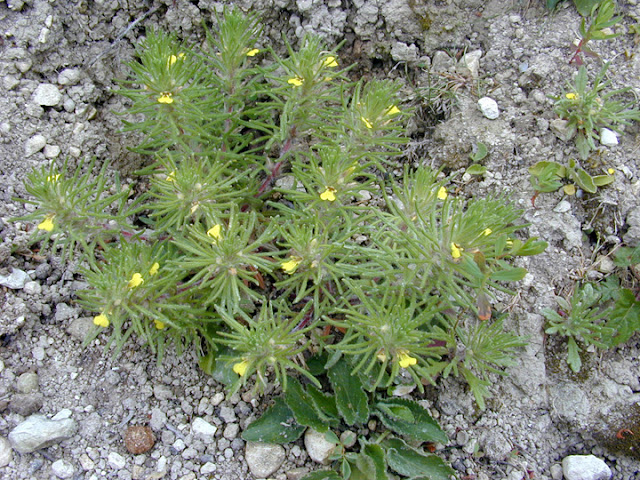 Barry Banson, a fellow birder and long-time botanist, had often tried to encourage me to take up 'looking at the green stuff' without success. He would often mention a place called Fames Rough, and would point out that it was very close to where I lived, and that I really should go along and try and seek out two of the rare species that were present - Cut-leaved Germander and Ground-pine. In fact, I did accompany Barry to that very place in 1981, but we didn't find either of them (not that I would have known what I was looking at anyway).

Fast forward to 1998. Barry's badgering over the years had paid off, and I was at the start of my immersion into all things botanical. I was still very green behind the ears and was gently finding my way into the process of trying to identify the bewildering array of species that appeared wherever I looked (pavement cracks, flower beds, roadside verges, footpath edges). Fames Rough beckoned, and that meant Ground-pine! The field guides depicted a strange, but obvious plant, one that even I could manage. On 28th June I travelled the short distance to Chipstead Bottom, and, after a period of confusion as to whether or not I was actually at Fames Rough, bumped into a couple who were out looking at the flowers. They sent me in the right direction. Fames Rough was a long, narrow clearing, bordered by wood and copse. Ground-pine was a small plant. Needles and haystacks sprang to mind.

To cut a long story short, I found a few plants. Once my eye was in, and I realised that I needed to look for disturbed ground to increase my chances of success, I found a few more. It was a modest plant, quite small, shy of flower and unassuming. You could look away from an individual plant that was at your feet, look back, and not see it! But close up... well, it had a great deal of character. Strange, wiry, hairy leaves. Small isolated yellow flowers. I was instantly smitten!

Each year I return to Fames Rough to check on Ground-pine. No two years are the same. Sometimes it goes missing - you see, it has a few problems (which is why it is only found at only c10 sites in the UK, mainly on the chalk in Surrey and Kent). This species really needs constant disturbance - it cannot compete with the coarse plants and grasses which will colonise and smother its preferred habitat. Loss of grazing, fewer field margins and the use of herbicides and fertilisers are all other nails in its coffin. Thanks to the Downlands Project, the Fames Rough Ground-pine population is helped by the 'ploughing' of a small strip (on a not quite annual basis). This not only clears the surface vegetation but also brings up the buried seed bank. Fortunately, Ground-pine seed is long-lived. This work is necessary to maintain this rare species. The few rabbits present do not produce enough disturbance to help it much. And this is how 'my' Ground-pine plants survive. 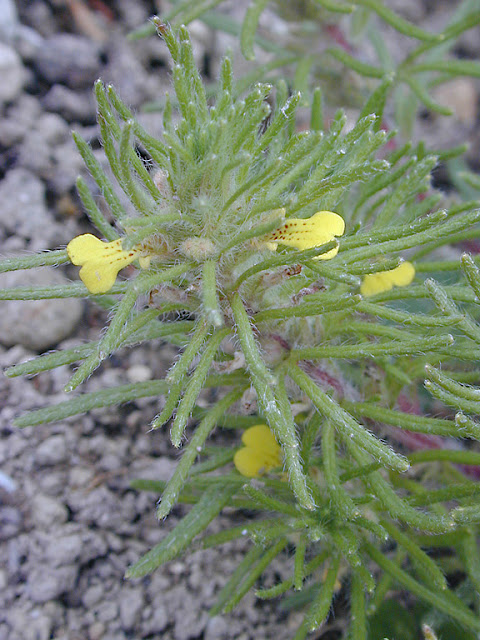 Sometimes this plant will pop up unexpectedly and surprise a lucky botanist. It happened to me on 22nd June 2004. I was walking along the chalk scarp west of Colley Hill (underneath Juniper Hill) and came across an area that had been totally cleared of scrub the year before. I could see some Hound's-tongue further up the slope so walked towards it (I do like Hound's-tongue). But before I got there I was staggered to be confronted by not one, not two, but 20 big, healthy, flowering Ground-pine (see top image). They were spread across several metres. This really was a once in a lifetime find. I returned the following year and could find none. The vegetation had smothered them. However, the seed is still there, lying buried, waiting to be liberated once more...

I have a fondness for Ground-pine that verges on having a personal connection with it. This is down to it being a local speciality, having been one of the first rarities that I saw and also because of that tremendous encounter on Juniper Hill. Even if I live to 100, I will return to Fames Rough each year in the hope that it will still be there, and if it is, I will quietly celebrate its continued survival.
Ground-pine plants