My birds of the year

There is nothing for you here if you are hoping for tales of epic twitches - my days of such tomfoolery are long gone. And even if I didn't trot off to see a Siberian Accentor or a Dusky Thrush, I feel as if I did, so numerous were the tweets and posts that conveyed the joy of doing so (plus a plethora of near identical images). We certainly celebrate our natural history headlines in one convulsion of sameness! Of course they were stunning birds, near mythical species that have now been consumed by those that wanted to feast upon them, but rarity is relative - after all, fewer people have seen Blue Tit in my garden than have seen Siberian Accentor at Spurn - (insert winky emoji face here).

So, in my modest birding bubble, what species 'did it' for me in the UK in 2016? Away from Surrey, I spent a total of six weeks at Dungeness, a week in Dorset and made a handful of visits to Pulborough Brooks in West Sussex. Birding time was kind, although the shingle was hard work. However, locally it was uncharacteristically rewarding (more of that to follow in a later post). Three species have made it, appearing in chronological order, not necessarily the rarest, but those that gave me the biggest thrills.

Iceland Gull, Canons Farm, Surrey
28th February
Canons Farm is not known as a place for gulls. Admittedly, thousands fly over the site most of the year (mainly Herring), plus Black-headed and Common often alight on the fields in small numbers. But if your 'thing' is to sift through larid flocks for white-wingers and Caspians, then you'd best look elsewhere. Two things conspired at the end of February to deal Canons Farm a gull-themed Royal Flush - the refuse tip at Beddington was closed for a few days and the farmer decided to plough up the Canons fields - so the gulls that normally feasted on landfill decided to dine on the invertebrates exposed in freshly turned earth! Ian Magness found it - a first-winter Iceland Gull, flying over the fields opposite Reeds Rest Cottages. It soon settled and had me reacting quickly to the news. This is a very good local record. It stayed in Tart's Field for maybe an hour, before disappearing for good, maybe back to Beddington when normal service was resumed... 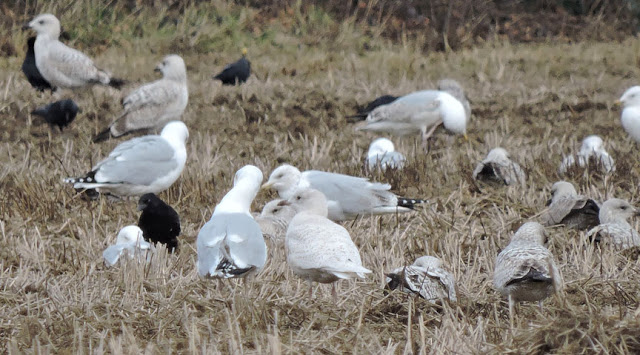 Montagu's Harrier, Dungeness, Kent
12th May
On the RSPB reserve is a viewing ramp that overlooks reed beds, pools and beyond, across to Dengemarsh and the farmland that marches inland towards Lydd and Walland Marsh. It is a magnificent panorama, and one that is always full of birds. It's a good place to see raptors, and on this particularly bright early afternoon I was being entertained by Marsh Harriers, Hobbies and the odd Common Buzzard. A ring-tailed Harrier took me by surprise - it just appeared, very close, then went behind a line of bushes, flying directly away and out of view. In the few seconds that I was on it I couldn't really declare what species it was, but put the news out anyway knowing that it would be picked up very quickly indeed. As it happened, it made a u-turn and flew back right over my head, giving excellent views and was at once obviously a Montagu's. For the next half-hour, firstly at close quarters, and then at increasing distance, it performed for up to 50 birders - a truly shared experience. Martin Casemore, who I had alerted earlier, was able to observe the bird from his front garden in Lydd and then watch it as it flew directly over his house! He has kindly given me permission to reproduce one of his images below, taken against the sun. To see more of Martin's superb photography (and to be kept bang up to date on the birds at Dungeness), please visit his blog here. 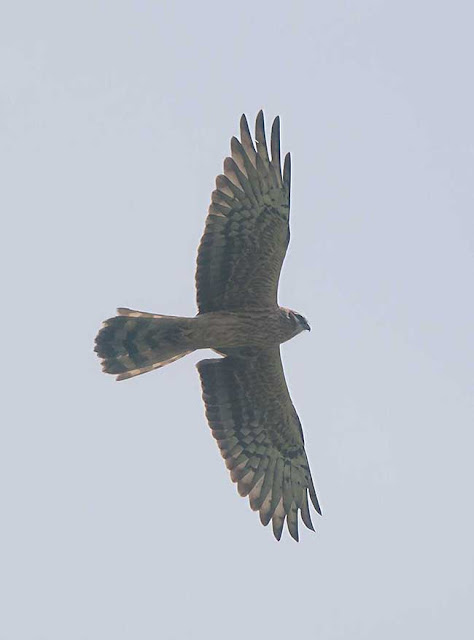 Cattle Egret, Priest Hill, Ewell, Surrey
2nd December
Not so much for the rarity (although it was only the second county record) but more for the feeling that the ornithological Gods were rewarding me for the time spent combing the waterless, 'birdless' higher ground of north Surrey. Not so birdless after all... you can read more about the event here.
at December 17, 2016

I enjoyed this post...then suddenly realised, 'Wait a minute, Steve twitched a gull!!" and enjoyed it again on a whole new level! ;-)