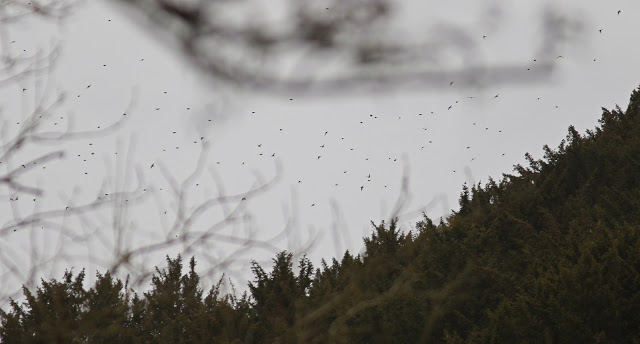 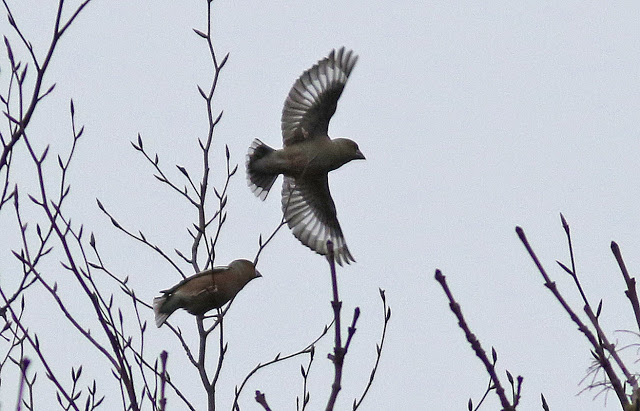 I do apologise. Another Hawfinch post on another day when I've been able to go galavanting about birding when some of you are having to work, but please bear with me.

Katrina was keen to see some of 'those birds' that I keep going on about and suggested taking a walk along the Hawfinch-haunted slopes of Juniper Top. This happily coincided with the presence of Peter Alfrey and Kevin Guest, as they had elected to take a birding away-day from Beddington. The observers were all present and correct, but would the birds play ball?

Kate and I took the lower footpath that runs parallel with Bramblehall Wood and soon started to pick up small numbers in the general area. We began to hear birds calling and, at times, the 'ticks' and 'squeaks' were as loud as I have heard them over the past few weeks. More birds were arriving into the treetops directly above us and started to move between here and the wood opposite. There was a lot of 'tooing-and-frowing' and it was obvious that we were witnessing at least 100 birds. I have been desperate for some other birders to get onto these very large numbers, as so far I had been the only observer to be putting out such counts. With this in mind we both went straight up the slippery and steep slope to meet Peter and Kevin on Juniper Top. With them in tow, and with little ceremony, we plunged back down the slope and started to scan the edge of Bramblehall Wood from the fence line beneath the footpath. We were in for an unforgettable hour's birding.

The birds were still there, flying above and alongside the wood, all fat avian missiles being propelled by white-barred wings, the finches almost collapsing with their front heavy load before another burst of wingbeats kept them in the air. Our counting quickly went beyond 140 and we started to believe that there may well be a couple of hundred before us. When they started to gather in the same area we were able to make a careful and accurate count. Our viewpoint was good. We counted together so as not to over- or under-cook the final total.

That is two hundred and sixty Hawfinches. There could have been more. We all agreed on this final figure as an absolute minimum. We counted them all flying into a large clump of Yews over a period of 15 minutes. Sometimes a breakaway flock would leave cover, wheel around above us, and return. Birds had been constantly dribbling up the valley to join them. It was an overload of Hawfinch, always in sight, their calls our soundtrack, with a group of happy birders "oohing" and "ahhing" frequently, these being punctuated by expletives as the largest flocks took momentarily to the air, only to fall back down into the deep green yew trees. After a while the flock started to disperse, but not that far as the valley was still full of Hawfinches - every scan showed birds in the bare treetops, flocks of various sizes crossing the sky, calls coming from unseen birds tucked up in the canopy.

It was a pleasure to share this with my wife and my Beddington chums. It was a privilege to witness such a spectacle. And even after all of this, now sat at a keyboard, I want to get back out there and see some more. I truly believe that there could be 300-400 in the Mickleham-Juniper-Bramblehall area. Maybe that count of 260 birds could get higher...
Bramblehall Wood Hawfinch Juniper Top

Steve Gale said…
Get over there Arjun - we were talking about you this morning, saying that you would regret it if you didn't.
14 February 2018 at 17:05

Lucy @ A Natural Interlude said…
I've run out of superlatives, Steve! So exciting and thrilling and even better to share it with friends and loved ones. Hawfinch posts are like Wheatear posts - there can never be too many :-).
14 February 2018 at 17:33

Steve Gale said…
Lucy, totally agree with your last sentence - and coming from the reigning Wheatear Queen that's really something!
14 February 2018 at 17:51

We are finding that whereas in the early winter these birds were always up in the trees, now they are rooting around on the floor a lot. You find a couple at a puddle, then suddenly twenty fly up. Do you think you are seeing most of the birds? Or could there be many more on the floor around the local area?
14 February 2018 at 22:16

Steve Gale said…
I have yet to see one on the floor DD! The terrain is steep and heavily wooded, with dense stands of Yew in their thousands. I truly believe that there are plenty more out there.
15 February 2018 at 06:15

Stephen Mills said…
What a fantastic sight!! Thinking of coming over on saturday-what time is best?
Any help woould be appreciated-Stephen Mills(Horsmonden Birder)
15 February 2018 at 20:29