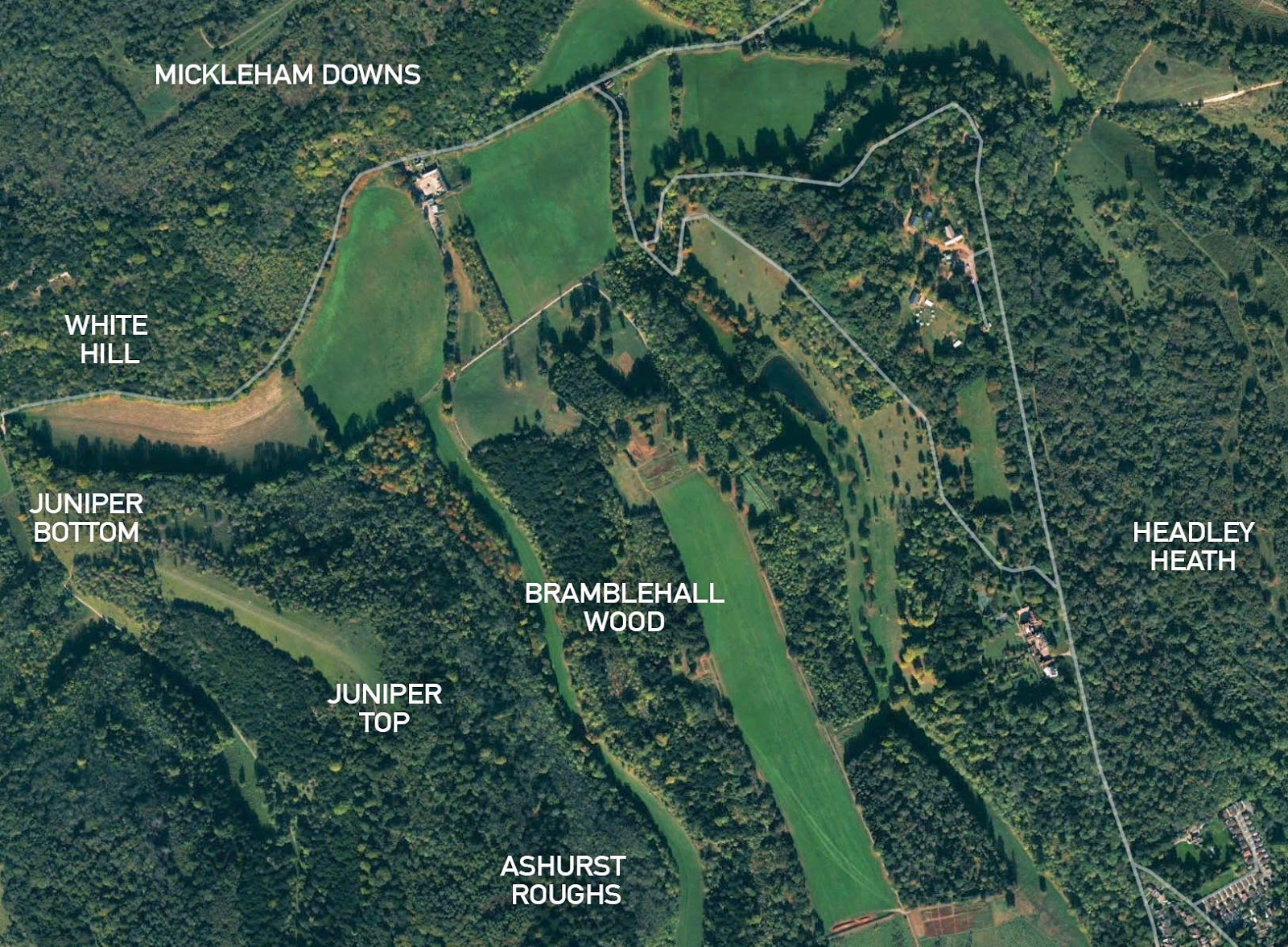 Another day, another dose of Hawfinches, but what a dose! With birds being faithful to Bramblehall Wood I returned this morning and immediately found up to 30 perched on top of bare trees, which quickly built up (with some birds flying across to Juniper Top). From my position on the 'Juniper Top - Ashurst Rough' lower footpath I became aware that I could hear Hawfinches calling above me. They were noisy and easy to track as they moved along the tree tops. It was a large flock, but numbers were difficult to assess due to having to look through a tangle of twigs and branches. However, the flock built and got an awful lot noisier - it soon became apparent that a minimum of 110 birds were involved. After ten minutes or so they moved up the slope towards Ashurst Rough.

Some of these birds may have doubled back, as a scan across the field towards Bramblehall Wood revealed a handful of perched birds on show. Slowly but surely, over a half-hour period, birds appeared out of nearby Yews and arrived from within the wood, and in time a clear 63 were perched out in the open. Before I could wipe the smile of of my face a single flock of 50 birds flew in and joined them! This was incredible. I scanned left and right along the woodland edge and was staggered to see more birds on top of trees... ones and twos breaking cover, other small flocks appearing from the wood, even more flitting over from Juniper Top. Wonderful. Again I had to ask myself how many were present? If I had to give a firm, 'no less than' figure, then 170 seemed fair - fair, but undercooked - there could be many more. I could only assume that the birds that had earlier made their way up towards Juniper Top had returned. The majority of the Hawfinches slowly melted back into Bramblehall Wood. I left the path with at least 50 still on show. Throughout my two and a half hours on site I did not see another birder.

This area is undoubtably favoured by Hawfinches. The map above gives an idea of where the 'Hawfinch hot-spots' are. Do those that I saw today include individuals from the 200 recorded on Juniper Top on January 30th - or is there a turnover of birds? As you can see, all of the sites are close to each other. Just how many birds there are in these wooded tops and valleys is anybody's guess. If I had to come up with a figure I reckon it would be close to 300 - but that would be but a total guess. At the moment Headley Heath seems to have fallen out of favour, the summit of Juniper Top is haunted by fewer birds, Mickleham Downs is still a reliable site and Bramblehall Woods is undoubtably the current hot-spot. There could be Hawfinches moving about from site to site, or just a lot of site-faithful birds popping up from their hiding places in front of a lucky birder. Below are my own personal observations since the invasion began.

Ric said…
Great field work Steve. Those numbers are incredible but a shame that no other birders don't take advantage of this once in a lifetime opportunity.
I've come across Hawfinch quite a few times myself and quite often I'm in a position to put other birders right on to the birds.
It does help that on one site, it's sometimes possible to view the birds without leaving the car.
10 February 2018 at 13:27

Steve Gale said…
An incredible invasion Ric, something that I will remember fondly. Although there were no other birders today there were a few during the week, when smaller numbers of Hawfinches were present.
10 February 2018 at 13:53

Marc Heath said…
That's an amazing number of Hawfinch. I just wonder how many there actually are out there and how many will stay to breed I wonder? Managed a few myself today (a few photos on my Blog)of these stunning birds.
10 February 2018 at 14:16

Steve Gale said…
There must be thousands countrywide Marc, and high hundreds across Surrey. I notice that there are larger counts starting to be made in Kent - they'll keep your shutter busy!
10 February 2018 at 14:24

James Alexander said…
Should add, though, a very helpful map and instructions. And a lovely walk. Pair of ravens the birding highlight, swan-like wing beating clearly heard. And lovely sunset on way back down. Will have to try the early morning ...
13 February 2018 at 07:45

Steve Gale said…
That is a shame James. They can go missing, only to suddenly appear again. Also they do seem to be more obvious in the early mornings. But there is always the scenery to compensate!
13 February 2018 at 08:09