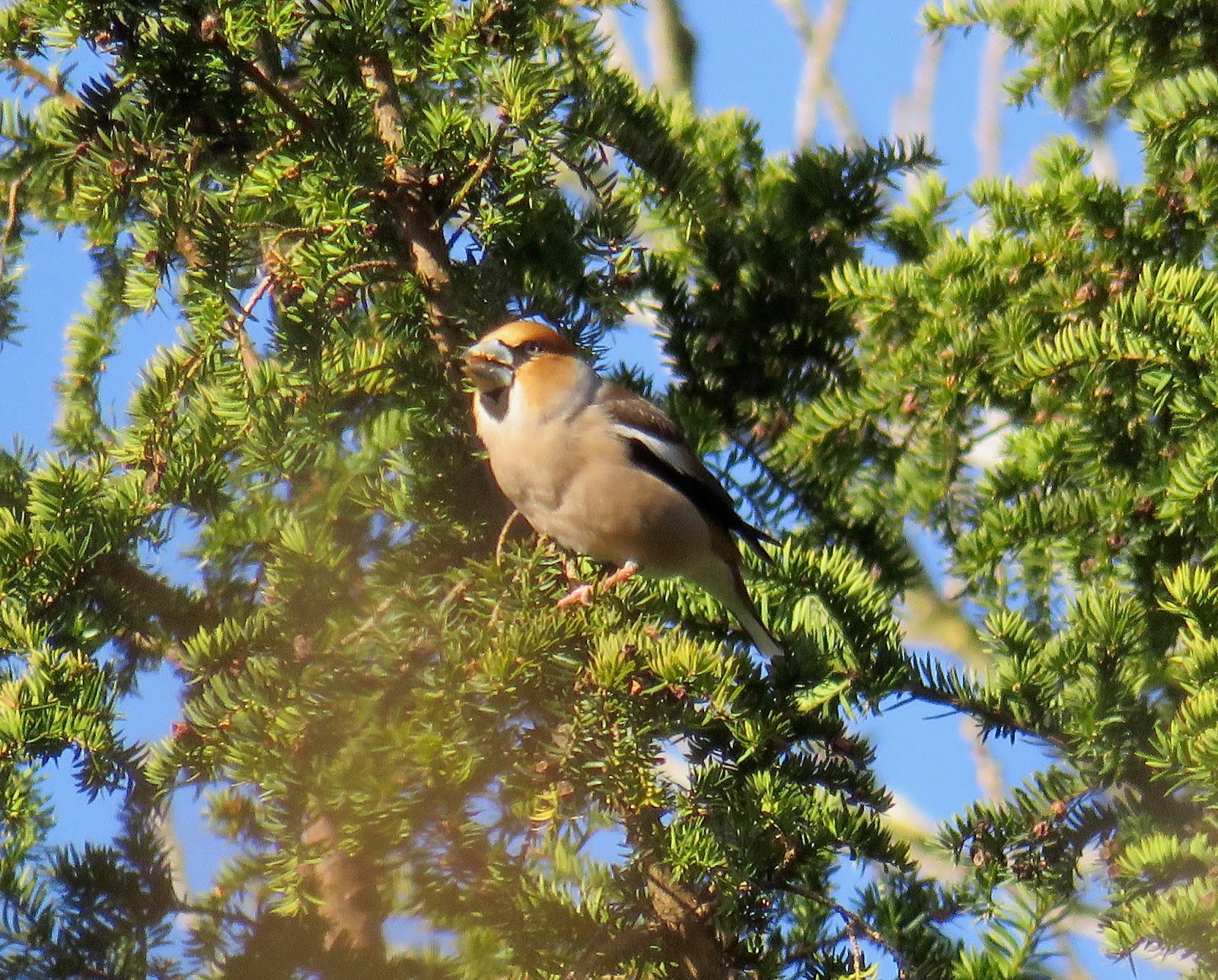 Bramblehall Wood was bathed in glorious sunshine, which no doubt helped swell the number of birders who joined me on the muddy footpaths to witness yet more Hawfinch action. It was a pleasure to watch these birds along with John, Lindy, Jan, Graham, Piers, Paul and Lee - it made the morning all the more memorable.

It was not so pleasurable to be told that two birders (even though they had been asked not to) entered the wood which is clearly private. This brings up three things - (a) they lack fieldcraft (b) they have no consideration for others (c) they are showing a lack of respect to the landowner. Once they have left the area and returned home it is us local birders who suffer any consequences. No wonder the suppression of birds is making a comeback...

Anyhow, back to the fun stuff. I recorded a minimum of 250 Hawfinches which were on show as early as 07.10hrs when I arrived on site. There were two episodes that I would like to share with you. The first occurred at the southern end of the wood at about 07.45hrs. Birds were perched up in an area of scrub and I managed to hide myself away directly opposite them. After five minutes they started to fly across the field towards me, alighting in a large Yew that was only 25m away. I couldn't see them once they had landed, but I could count them as they came in - ones, twos and threes, no large flocks - this quickly building up to 71 birds before something spooked them and they exploded into the air and scattered. Count abandoned!

The second was shared with several other birders. We came across a Yew, just off the path, that was full of Hawfinches, our estimate being 60-70 birds. Although wary, (some had flushed), we'd managed to creep up to them with some success as c20 were still left feeding. A good 15-20 minutes were spent watching them, surrounded by calls. There were several bright males involved which took most of our attention. We all just stood back and took it all in. Marvellous stuff.

I was not as successful elsewhere. Four were found at Higher Ashurst (just north-east of Bramblehall Wood) and another four were seen on the south-eastern slopes of Mickleham Downs. Another feature of the morning were the Marsh Tits, up to five belting out their song.
Bramblehall Wood Hawfinch Marsh Tit