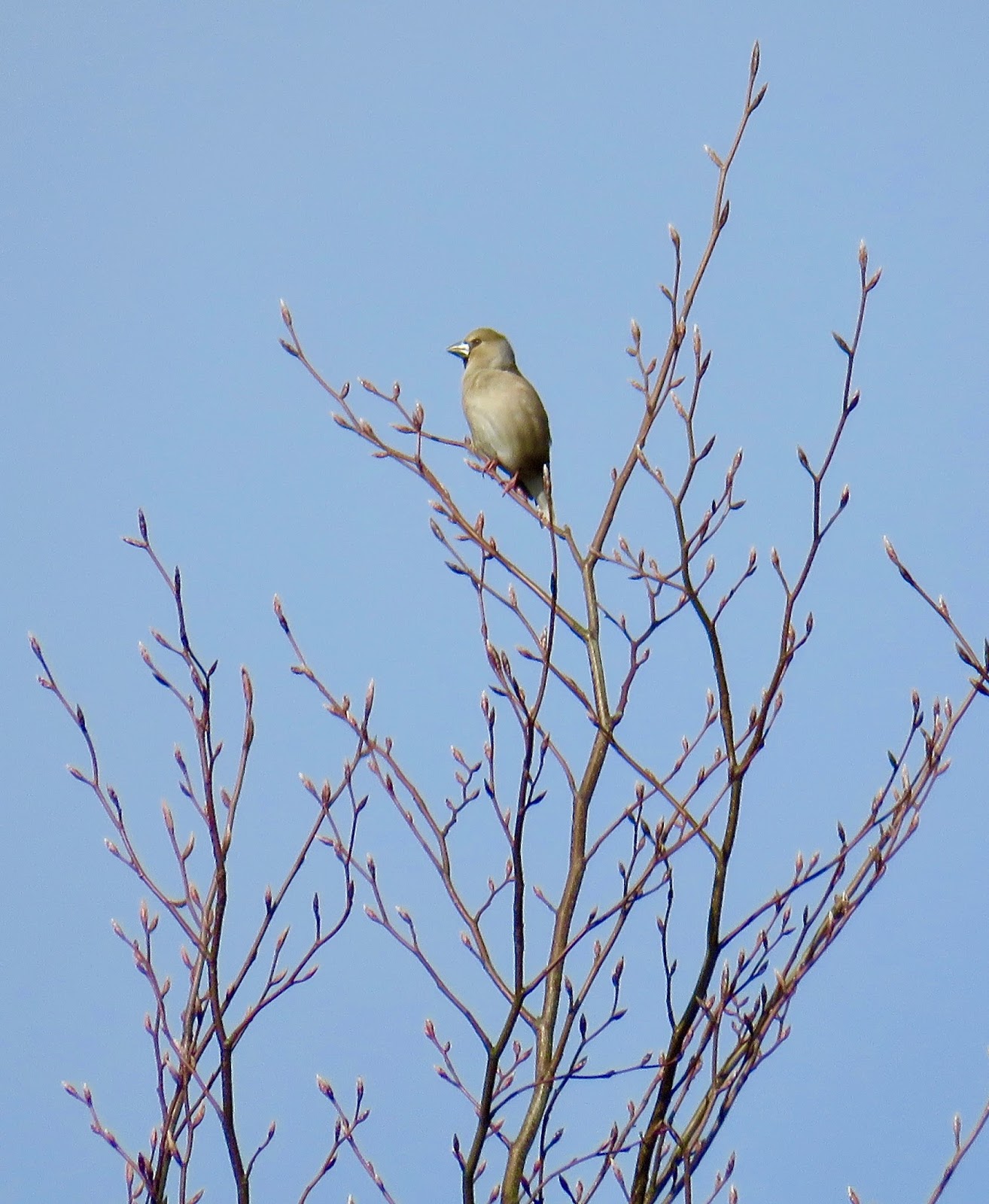 I had wanted to return to the woods and valleys in the west of the 'uber' patch to once again search for Hawfinches, but events at Bramblehall Wood had put that on hold - until today. The centre of the search were the wooded slopes of Ranmore Common and, to the north and across a narrow valley of pasture, Polesden Lacey. The whole trek took six hours, but it was six hours very well spent. It started in mist, was briefly bathed in sunshine and finished up overcast.

Starting at Denbighs Hillside carpark it is a gentle downhill walk through Dorking Wood (the footpath can be picked up opposite St. Barnabas Church). I had recorded Hawfinches here on February 6th. Only three were picked up but it was good to know that they were still present. Once through the wood you are treated to a pleasant view across farmland towards Freehold Wood and Chapelhill Wood. It is a beautiful area peppered with highly desirable property, way out of my reach unfortunately. However, my appreciation of the view was cut short by the calling of Hawfinches - there were 23 perched up in a small island copse on the farmland. These quickly flew up the slope, over my head and into Dorking Wood. As they moved westwards along the woodland edge they were joined by others that I had not previously seen. The flock now numbered 90 and were proudly on show through the mist. After only a couple of minutes they then took to the air and wheeled around, with the count increasing to 115. There are always hidden birds! Here are 59 of them - or are there 60?

They were followed to a clearing where half a dozen mature yews had been spared the forester's chainsaw. A good 15 minutes were spent watching up to 70 of them, quite happy to entertain my presence as long as I didn't lift up a camera - binoculars seemed fine though!

As tempting as it was to just stay with them, the urge to check the woods on the other side of the valley was strong. Walking through the farm buildings at Bagden Farm revealed two more in a small copse and a scan of the southern flank of Chapelhill Wood produced three. I did go into the wood but only heard some calls. Back down on the level and turning west you can walk along a disused driveway that takes you toward the grand house at Polesden Lacey. Regular scanning back across the valley would often show up the odd Hawfinch or two, perched or in flight. Arriving at the house I was delighted (but not surprised) to see a flock of 14 on conifers in the formal gardens.

Here a return south was made across the fields and back into the woods at the western end of Ranmore Common. Zig-zagging through the rides Hawfinches were heard continually but kept stubbornly out of view. A few shapes did deign to appear and I got the impression that they were of small number and widely scattered. This theory was quietly kicked into touch when 24 birds emerged from a Yew when I was expecting just a couple to appear. Back at Dorking Wood there were still c20 birds on show. The totals were:

I really cannot impress upon you how many birds are strewn across this valley and its slopes. Almost every look along a line of distant treetops would reveal a few birds. Idle scans across the pearly-grey sky were interrupted by the odd bird flitting from wood to copse. There is a lot of habitat suitable for Hawfinches along this section of the North Downs that has so far gone unchecked. Great banks of Yew that could yet hold birds and in numbers. How many are out there waiting to be discovered? Time is running out...
Bagden Farm Chapelhill Wood Dorking Wood Hawfinch Polesden Lacey Ranmore Common

I think its the way that at first you hear the calls but can't see the birds, then slowly they appear in ones and twos, then there's a whoosh and an explosion of white wing-bars and tail edges and a flock of them perched in branches in front of you that makes the whole business of looking for Hawfinches so exciting. Definitely amongst the top birding experiences from a few decades of birding.

Steve Gale said…
Thanks DD - totally agree with you that this is one of top birding experiences of recent years. I hope we have another 3-4 weeks of full-on Hawfinches before they disperse.
18 February 2018 at 16:14