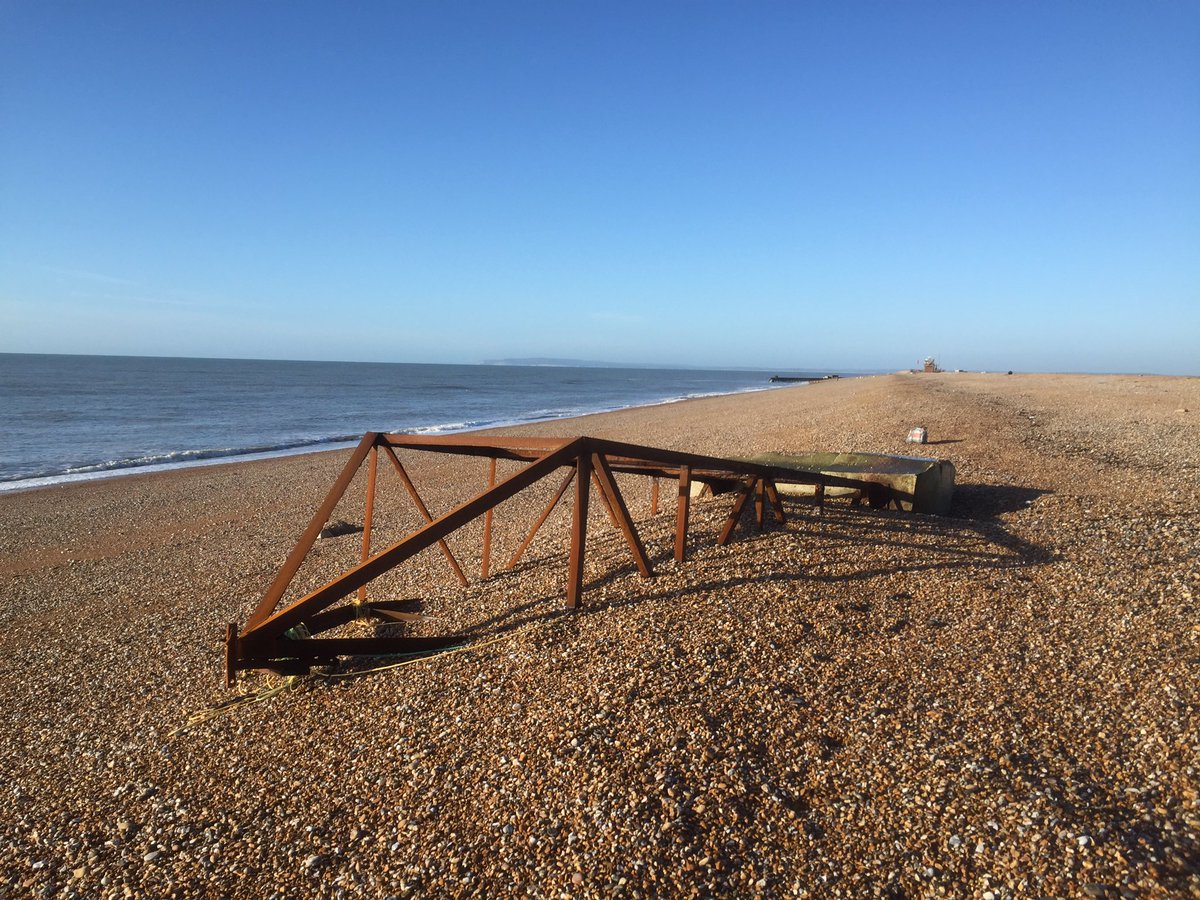 In 1960 construction started to take place on the nuclear power station at Dungeness. The sleepy coastal community of fisherfolk were about to get one almighty shake up. Aside from a part of their skyline being obstructed by the new building, those at sea also lost their sightline between Lydd church tower and the lighthouse (which they had used as a navigational aid). Thus, to compensate for this loss, a series of wooden and iron structures were erected along the beach, to aid the safe and speedy return of the small fishing fleet. These were, after all, pre-GPS days!

As long as I have been visiting Dungeness, now 44 years and counting, these strange sculptures - to me more art installation than working structures - have been as much a part of Dungeness as have the lighthouses. But now they are falling. One by one the shifting shingle is taking them down.

I'm indebted to Dungeness resident David Gower who this morning sent me the image above, captioned 'the remains of what was once a very majestic structure'. David and I both share an appreciation and love of such things, and particularly for this deserted part of the western beach, between the power station and the Dengemarsh coastguards station. His picture shows what is left of the 'Diamond' marker. It used to look like this: 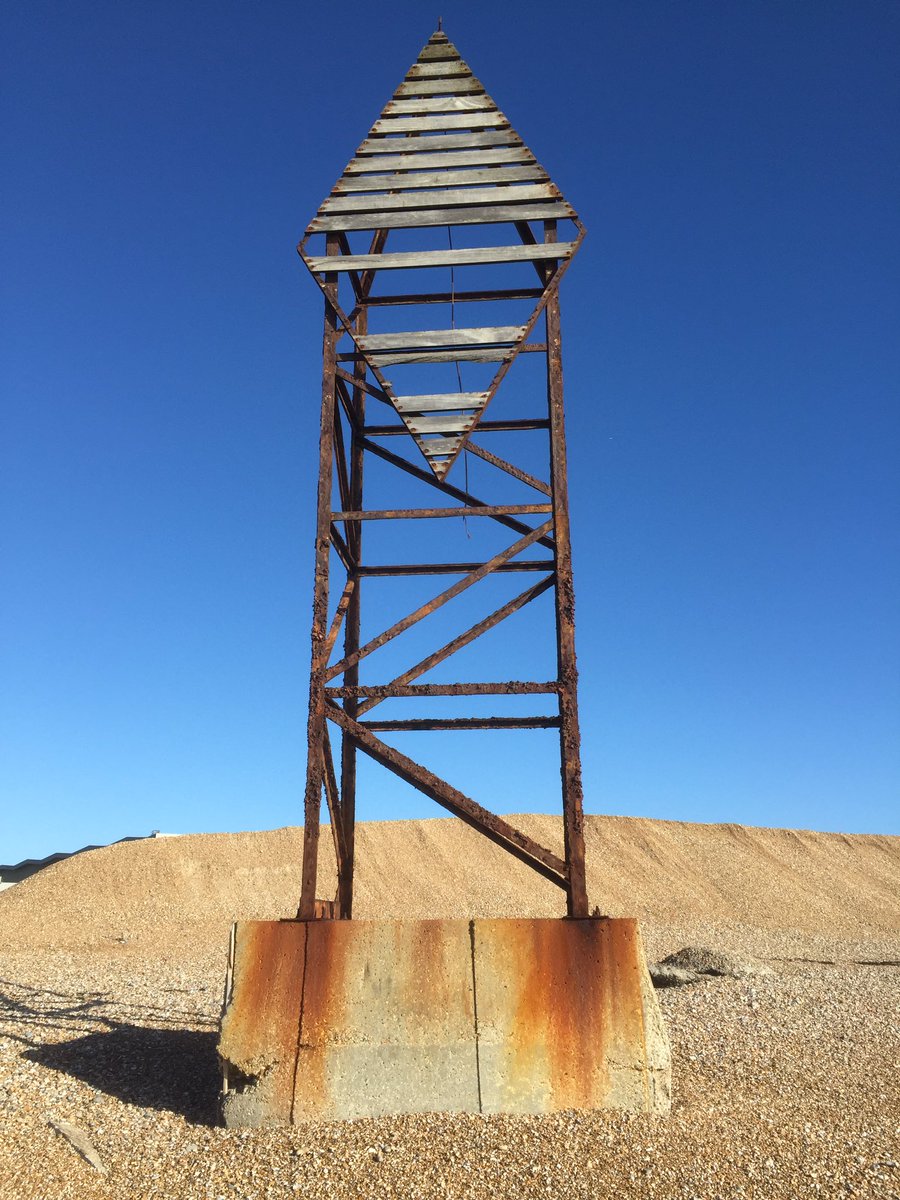 Even here, as upright as it appears, the loss of wooden slatting and the rusting of the structure is clear to see - years of salt spray and gale force winds have taken their toll. But the hefty concrete base is still standing strong, but here we can see an inherent weakness - the supporting shingle is missing. Once upon-a-time this would have been mostly hidden, cocooned by the beach. In the 60-odd years in which these markers have been standing, the western beach at Dungeness has been man-managed. Believe it or not, the power station was built on a receding beach. When I first visited Dungeness in the mid-70s (and well into the 1980s) there would be a daily procession of ARC lorries bringing shingle ballast from inland to dump on the beach, trying to replace what the sea was scooping out and moving over to the eastern flank of the peninsula. The height of the beach has waxed and waned since then, sometimes due to storm action, at other times at the behest of men with large machinery. Here's an illustration of how it has altered with the help of another marker, 'Mr. X'.

There are some who will say that these markers have had their day, are no longer of use and the fact that they are collapsing is of no consequence. To David and myself it is a part of Dungeness that is sadly disappearing, a reminder of old ways, of how things once were. They are echoes of the past, ghosts of the old fleet. I for one will mourn them. You can, however, see at least one marker that is still in rude health, affectionately known as Mr T, which stands upright at the point, just east of the New Lighthouse. I wish him well. Here is one more image of that fallen giant, the diamond marker, taken last week and soon to be claimed by the sea.

I'm indebted to both David Gower and Owen Leyshon who have both provided images and information for this post. Both of them men of the shingle.
Dungeness markers

Gavin Haig said…
Fascinating post Steve. Although I've been to Dungeness several times, I didn't know about these daymarks, and your tale of times past brought back a memory. Years ago I visited Lade Pits(?) where there was a massive old concrete structure (or more than one?) shaped like a huge radar dish. Whoever I was with told me they were used in pre-radar days as acoustic listening devices that would detect enemy aircraft approaching across the Channel. It conjured up a picture of some old boy, sitting under the stars and smoking a pipe, with his ear cocked towards this lump of concrete, listening for the hum of a Heinkel.

Steve Gale said…
Yes Gav, you are correct, it was Lade Pit where you saw the dishes (two round mirrors plus a long curved wall). They were in action for a short while, killed off by the discovery of radar. Maybe a future post...

In agreement Simon, just the sort of place a Gormley sculpture would be placed.
19 January 2020 at 08:25