I took delivery this morning of 'Micro-moth Field Tips' by Ben Smart and immediately had a flick through the book. For micro novices like myself, he has thoughtfully divided up the pages into monthly sections, so a peruse of January and February has already given me plenty of projects for the next few weeks. My attention was taken by a page devoted to Phyllonorycter leucographella, a micro that can be found in its larval state at this time of year on Firethorn (Pyracantha). Now, my neighbours have a splendid Pyracantha growing around, and over, their front door - why not nip out and take a look? The photographs in Ben's book had already alerted me as to what to look for - white, papery mines on the upper side of the leaf - so more in hope than expectation the short walk to next door's Firethorn was made. A quick check revealed a number of likely candidates.

Everything seemed to match up with what I had read. Even if the mine was untenanted, then at least I could record the presence of this species for the garden. However, my own self-imposed rules to be able to allow the species onto my list (going for the 1,000 remember) is to observe a living creature. I held the leaf up to the light, hand lens in hand, not really expecting that the first leaf on the very first attempt would reveal a larva burrowing away inside, but.... bloody hell, there it was, a dead ringer for the book's illustration (black abdominal markings all present and correct, pictured below), moving around before my eye. A few hurried images were then taken. It cannot always be as easy as this, can it? 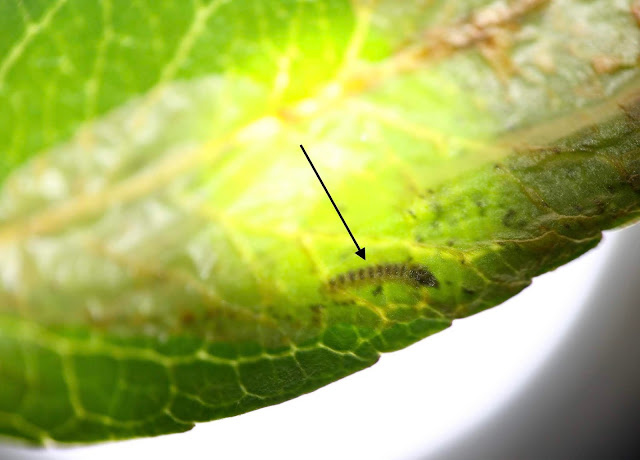 Gibster said…
Excellent start! It's very common in the London area, in fact there's probably not a single Pyracantha bush over 2 years old that doesn't have it in the more central areas.
11 January 2020 at 18:20

Steve Gale said…
Seth, a lot of this micro journey will involve me recording very common species for the first time. They will be hiding in plain sight!
11 January 2020 at 19:57

Skev said…
Have a look out for 'A Field Guide to the Smaller Moths of GB & Ireland' too by Langmaid, Palmer & Young. Got any Holm Oak near you? Go and look anytime for evidence of three species that should be around where you are: Ectoedemia heringella (should be tenanted in next month or so), Stigmella suberivora (could be tenanted now) and Phyllonorycter messaniella (should be tenanted early spring).
12 January 2020 at 13:51

Gibster said…
Manor Green Road in Epsom has several large Holm Oaks, Steve. I've had all 3 of the species Skev mentions along there.
12 January 2020 at 14:00

Steve Gale said…
Thanks for the heads up Skev. As for the book recommendation, I bought it at the same time as Smart.