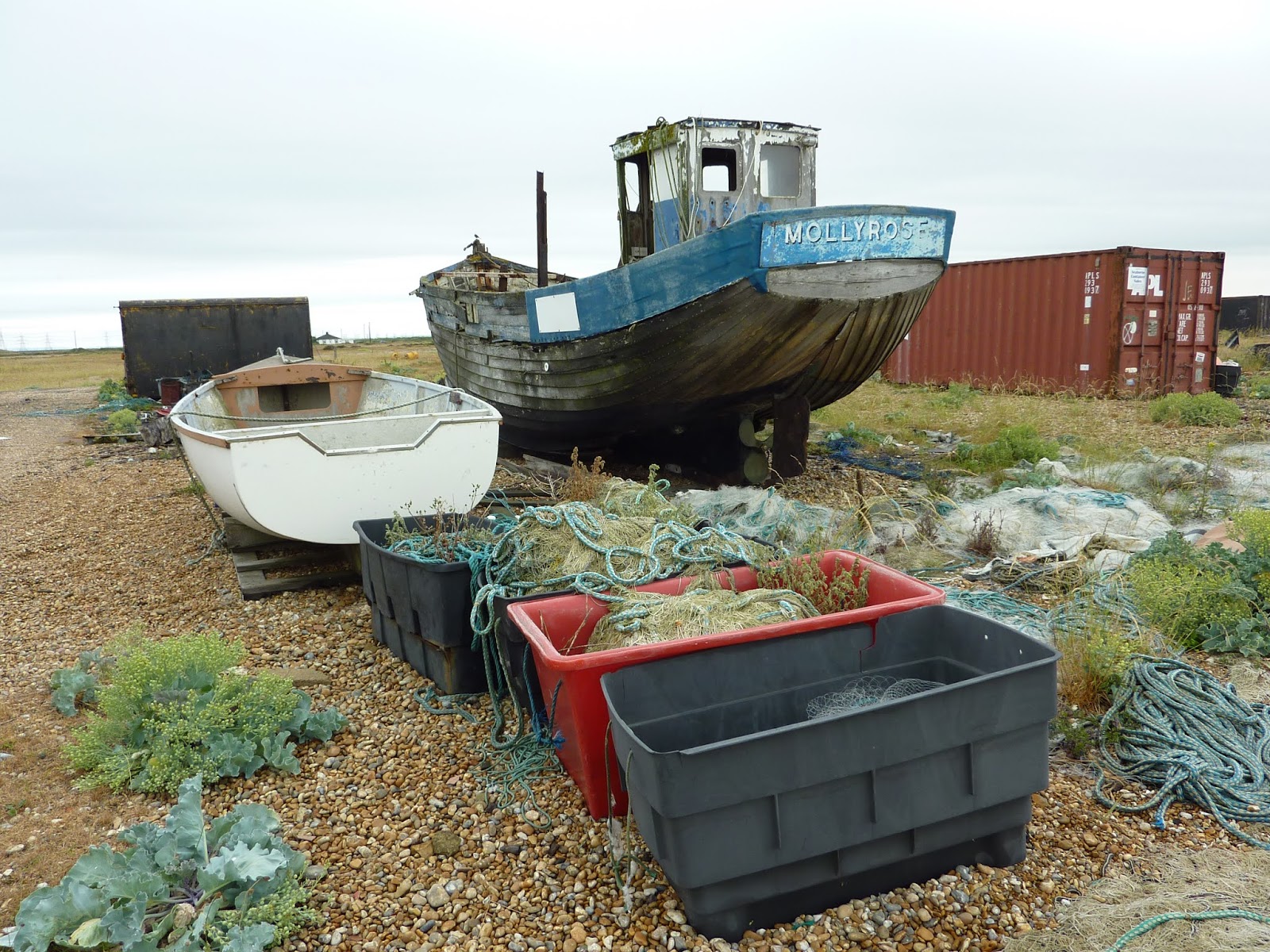 The beach and its hinterland are scattered with the remnants of past lives, set out before us in the guise of concrete bases, broken glass, shattered ceramics, twisted metal and rusted pipes. These can be found strewn across the shingle in several places. The crunch of shingle beneath your feet becomes the crunch of man-made debris without warning, swapping geological crunch for that of the Anthropocene. It is hard not to come across these reminders of the past without wishing to know more, to be able to delve further, for here are long lost lives, largely forgotten and eroding with every winter storm, each blast of summer sun and slowly crumbling by the actions of the roots of vegetative succession. When you look across at the modern re-imaginings of the developments that hug the single-track road which follows the shoreline, it can be hard to fathom out where all of these ‘ghost’ buildings originate from. Dungeness may never have been the home of a bustling town, but the shingle has seen much in the brief time that human beings have decided to call it home.

Dungeness human footfall began in earnest with the erection of the first lighthouse in 1615, beach expansion leading to a re-siting in 1635, and again, in 1790. A redoubt/fortress was built in 1798 in response to the threat of invasion from Napoleonic forces. That was short lived, being abandoned in 1803. An enterprising family settled on the point to sell water to ships that stopped off in the mid-to-late 19th century. With fishing and coastguard families consequently moving in, a school was opened in 1876, the classroom register being swollen when, in 1883, a railway line was laid to the point and with it came the rail company employee’s families. Many of them moved into old railway carriages which they modelled into functioning homes. More beach action required a new lighthouse to be built in 1904. The site of the old redoubt was used as ground to build a row of houses for the use of the Royal Naval Signal Station around the same time. The end house was reserved for the Commanding Officer and today houses Dungeness Bird Observatory. Several hundred metres west of the coastal track shingle extraction took place in the early years of the 20th century, and much temporary infrastructure and a network of carriage lines were put in place, particularly during the 1930s and 40s.

But time stands still for no man or building. Lighthouses were pulled down or decommissioned. The school was evacuated at the start of World War Two and never re-opened, finally being demolished at the end of the 1960s. The railway line was closed to passengers in 1937 and stopped functioning altogether in 1953. The bases and debris of these buildings are still clearly visible. If you find yourself alongside them, take a moment to reflect on those who’s lives revolved around these places. Imagine the schoolchildren running in through the door to the sound of the bell, listen on the wind and try and pick up the incantation of alphabet and times tables from the young voices. What were their names, these long-gone beating hearts? What were their hopes? What did they see when they looked out across the shingle? In your mind’s eye, observe the train driver as he steps down from the engine at the Dungeness halt, clutching his sandwiches in greaseproof paper, chatting to the guard about the sheep on the line or the squall that he can see coming from the south-west. All been and all gone. Bit part players in the social history of Dungeness, as we too will become. Footnotes.

The beach is literally littered with reminders of the once larger fishing fleet of Dungeness. Lurking amongst the modern plastic netting and fish boxes are old boats, winches, engines and tanning coppers. As much as this abandon of tidiness could be condemned, it holds an aura. I tend to wait until the day trippers have left, and wander through and around this grotto of grot in the early evening. It is the haunt of the artist, the photographer and the soul-searcher. It says as much about the beach life of 2020 as it does of the long-lost fisherfolk.

There is one place above all others that I let my imagination soar within this human history. You will find it at the end of the Dengemarsh Road, close to where the flooded gully ends. You could easily miss it, but if you want a hint as to where to find it, wait until the late-Spring and look for a large clump of Red-hot Poker growing off the eastern side of the road. Here are the foundations of two buildings. One of them was Myrtle Cottage. The other was a pub - The Hope and Anchor- that was used by the crews of passing boats that had rested up in Rye Bay. Today the power station, with its accompanying pylons, dominate the skyline. But when the pub was active – certainly by 1879 and most probably before – this was a lonely, desolate place. I sit here and imagine the sailors walking up from the beach, laughing and joshing as they look forward to their beer, entering the hostelry and greeting the landlord, keen to hear the news. They would have discussed the Boer War, the death of Queen Victoria and many would have lamented lost family and friends during the Great War. By the time the Second World War came along both buildings had been abandoned to the elements and were left at the mercy of the fierce south-westerly winds. It is a wonderful, if maudlin spot to reflect on time and place, of our own role in life, and of what we leave behind.

And there's more! The day markers for boats that are now slowly falling over are of a more modern vintage but still part of the evolving Dungeness museum. Groynes that were long buried are re-emerging after storm action, like disinterred skeletons. And you will come across many objects that defy precise categorisation - old walls, shattered bases, rusting metal objects that once were built, served their purpose but then fell out of favour and into disrepair. If only they could talk... 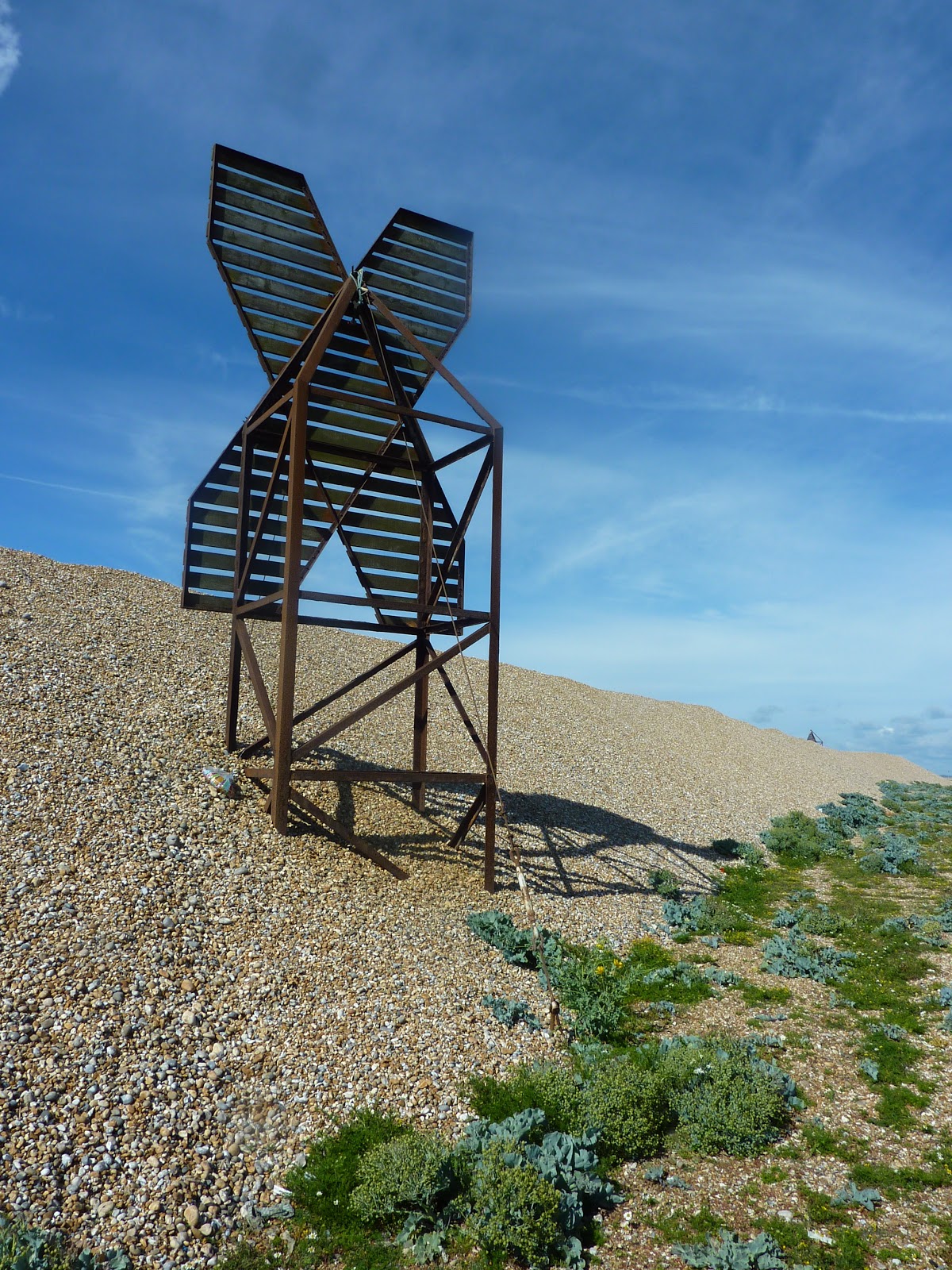