Bird book of the year 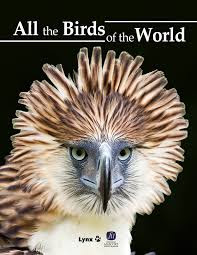 I cannot claim to be a world lister. Apart from several birding jaunts around central and Southern Europe, I've only ventured further afield twice - to Israel and Malaysia. Although my enjoyment was immense, my fear of flying has got in the way. Even family holidays have had to take this into account, with my reluctance to board any plane being conquered only every 3-4 years or so - and even then alcohol and/or tranquillisers were a necessary part of the process. Not a good base then to even think about world listing.

When Lynx Edicions announced the publication of their book, 'All the Birds of the World', I was not initially stirred. And then I saw some of the plates. Wow! I had to get it. It has been so popular that the first print run could not meet demand, so I had to wait five weeks for my copy to arrive, but it was so worth the wait. It's big. And thick. And heavy. Each page a delight of avian promise, with all of the taxonomic treatments from the four major world lists covered, every species illustrated to at least a male, female and regional or sub-species variation. A distribution map, species status and even a tick box is printed alongside. I don't have a lot of use for nine-tenths of the tick-boxes, but they act as an encouragement to further air travel (once COVID has gone and done one of course). It isn't cheap, but it is worth every penny.

Below is an example of what is on offer, a spread that actually depicts some of the gems that I saw in Malaysia. There are times when I regret not having had the world-birding bug, and some of those times are when I am leafing my way through this particular book.

Email ThisBlogThis!Share to TwitterShare to FacebookShare to Pinterest
Labels: All the birds of the world, books, Lynx Edicions

Just another example of "meaningless" lists?

And at 4.8Kg in weight, it's the only publication that comes with it's very own dedicated extra strong coffee table.

You must be every book salesman's delight.

Ric - the coffee table was an optional extra that I declined.
Derek - agreed, I’m a sucker for a good book