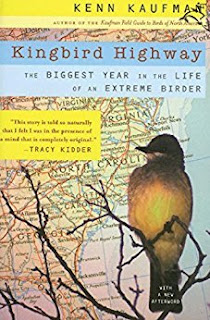 Back in 1973, an American teenage birder by the name of Kenn Kaufman spent the year birding across North America, in an attempt to see more species of bird in a calendar year than anybody had recorded before. He wrote an account of those 12 months directly afterwards, but was so disappointed with the result that he hid the finished manuscript in a box. It was not until 1997 that it was dusted down and, with the help of professional editors and his own growth as a writer, it was published. I’m glad that it was.

I was aware of this book, a modern birding classic, but had not read it. Over recent months, birder Mervyn Jones has implored me to do so, as it is a book that he holds in the highest regard. This Christmas I finally got hold of a copy and, over the past two days, have done so. What a fantastic read.

The fact that the book has been written from the perspective of an older man looking back on his younger self give the words so much more gravitas and meaning. The skill in the writing is that none of the naivety, impetuousness, fearlessness or difficulty of youth has been lost - we still travel from bird to bird and from place to place with the 18-year old Kaufman, can share with him his hopes, plans and passions. The older Kenn is able to navigate us through how the events were to mould him, build him and break him. He ‘did’ this birding year on a shoe-string, hitching and bumming lifts, eating little and rough-sleeping. This was a time of simple communication - he wrote to friends or contacts for information, had to seek out pay phones, heard about rarities days after they turned up (and sometimes days after they had gone). Compared to the current day ‘Big Year’ competitors, who have up-to-the-minute information at their fingertips, mobile phones and credit cards that rack-up thousands of dollars on plane tickets and hotel reservations, Kaufman’s year has an authenticity, purity and charming simplicity about it. It was also at a time when the American birding scene was being flooded by the children of the 1950s who had grown up through the liberal and free 1960s, bringing new-thinking and a confidence with them. It is a social document as much as a book about extreme birding.

There is much to admire in the honest writing. This is a book with an author who starts out on an obsessive quest but identifies that the journey he thought he was taking was changing; of a boy becoming a man; a questioning of what the whole enterprise is really about; and a realisation that he was in danger of drifting and needed to come to terms with the fact that what he was doing could not last forever. These observations and revelations raised the level of the book from just being a cracking birding yarn to one of much deeper intellect. For those of us who do not live, or have not birded ‘across the pond’, there is a mythology behind this vast continent, with the distances that were being travelled ones that we cannot fathom from our small islands. The tales being recounted have a cinematic quality about them, with backdrops of dramatic wilderness and industrial landscapes alike. There are too many highlights within the pages to mention them all, but two in particular have stuck with me - the thousands of Myrtle Warblers desperately seeking food during a freak early-spring snow storm on the east coast; or of both Ross’s and Ivory Gulls floating by an Alaskan coastline like avian apparitions. I loved it.

Did he achieve a new record? Well, you’ll have to read it yourself to find out. But, as the author tells you, whether he did or not is beside the point.

Hi Steve, I`ve re-read that book on many occasions down the years and seem to get something different from it each time, but always seem to come away with a feeling of sadness at the end; as you say, its not just about the listing. While most of us can probably identify with such obsessive behaviour the vast distances he travelled across North America in his quest was quite mind boggling - I shall have to dig out my dog-eared copy for a re-read now! Good birding for 2021. Paul

Have always meant to read this but never have. Now ordered!!

Hi Steve, That sounds a good recommendation and will look that out. I've read both The Big Year and Wild America which sound as if they are in the same vein and are both much more than just a book about building a big list. Thanks for all the Blogs this year and for BWkm0 - something positive to remember about 2020. Happy New Year, may it be a much better, happier and healthier New Year for us all. Stephen

Paul - I bet the book brought back memories of May Days in Bedfordshire!

Martin - you will not be disappointed.

Stephen - thank you for those kind words.

HAPPY NEW YEAR TO YOU ALL.

Truly amazing. I got it for Xmas and am now up to page 91 snow storms in South Carolina!

One of my favourite birding books

One of my all time favourites that I've read several times, but not for a few years - must be due another re-read, thanks for the reminder Steve, & a Happy New Year to you

Stewart, Jonathan, Steve - I’m obviously in good company. All the best in 2021 to you all.

Mervyn lent me his copy a few years ago, an enthralling read.

I read it a few years ago Steve and was enthralled by it. I'm looking at it on the book shelf now, so I might just get it down and read it again!

If it's not too late, Happy New Year to you.