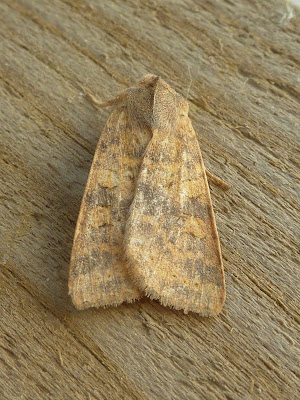 At the end of each December, I look back on my 'moth year' and take stock of what happened. Was it a good year for migrants? How did my efforts at identifying micros go? And, what are my targets for the following year?

The first two questions can be answered quite succinctly: "so-so" and "not too bad". I can expand on the third. As for the garden MV, there are still a few gettable macro species that have yet to appear here, such as Poplar Kitten, White Satin Moth, Red-necked Footman, Sprawler, Dusky-lemon Sallow, Pale-lemon Sallow (pictured left), Oak Rustic and Hedge Rustic, although the latter is on a downward spiral and is becoming harder to rely on each year. All those mentioned are moths that I've seen elsewhere, but there are others that could appear in the garden and would be totally new for me, such as Juniper Carpet, Maple Prominent, Four-spotted Footman, Dark Crimson Underwing, Black-spotted Chestnut  and Double-line. Some of those are pushing it a bit, but are perfectly feasible - I've had more surprising species turn up in the past.

Within a couple of hours drive from home are a number of day-flying targets. I have site information for all of them and have tried unsuccessfully in the past, my planned efforts for this past year being postponed due to 'you know what'. They are Scarce Forester, The Forester, Narrow-bordered Bee Hawk-moth and Wood Tiger. I've spent quite a bit of time on chalk downland in Wiltshire, Hampshire, and Sussex searching for them, with Cistus Forester being my only reward, leaving the hit-list above as something of an ongoing project. It is starting to get personal with Wood Tiger - I've been to the right places at the right times of year (allegedly) a number of times. But it is always good to have some unfinished business - seeing everything at the first time of answering would be dull indeed.

I'd race you to Wood Tiger, but they area rare up here. Holy Island has them and some of the Kielder mires. Holy Island is my best shot having found the caterpillars to be quite plentiful...

Bogey macro for me Stewart, but I live in hope.

I used to see Wood Tigers a lot when I lived in North Wales - you just see them bombing along really, really fast. The only one I ever saw landed wasn't very well

Dave! Where are you? Back in the UK?

Hey Steve, nope still in the Chathams - I'll give you a shout when/if I make it back & we can boycott Mr Wetherspoon!