There are days when I decide that I am going to bin Twitter. These are the days when I spend far too long reading through the tweets and when I tweet something that becomes contentious. Days when... you get the picture. But when I think such thoughts I remember that this platform has become my primary source for latest bird information, world news alerts and social contacts. It is also a place that I can tweet out any old rubbish and then have a conversation. These are my tweets for today: 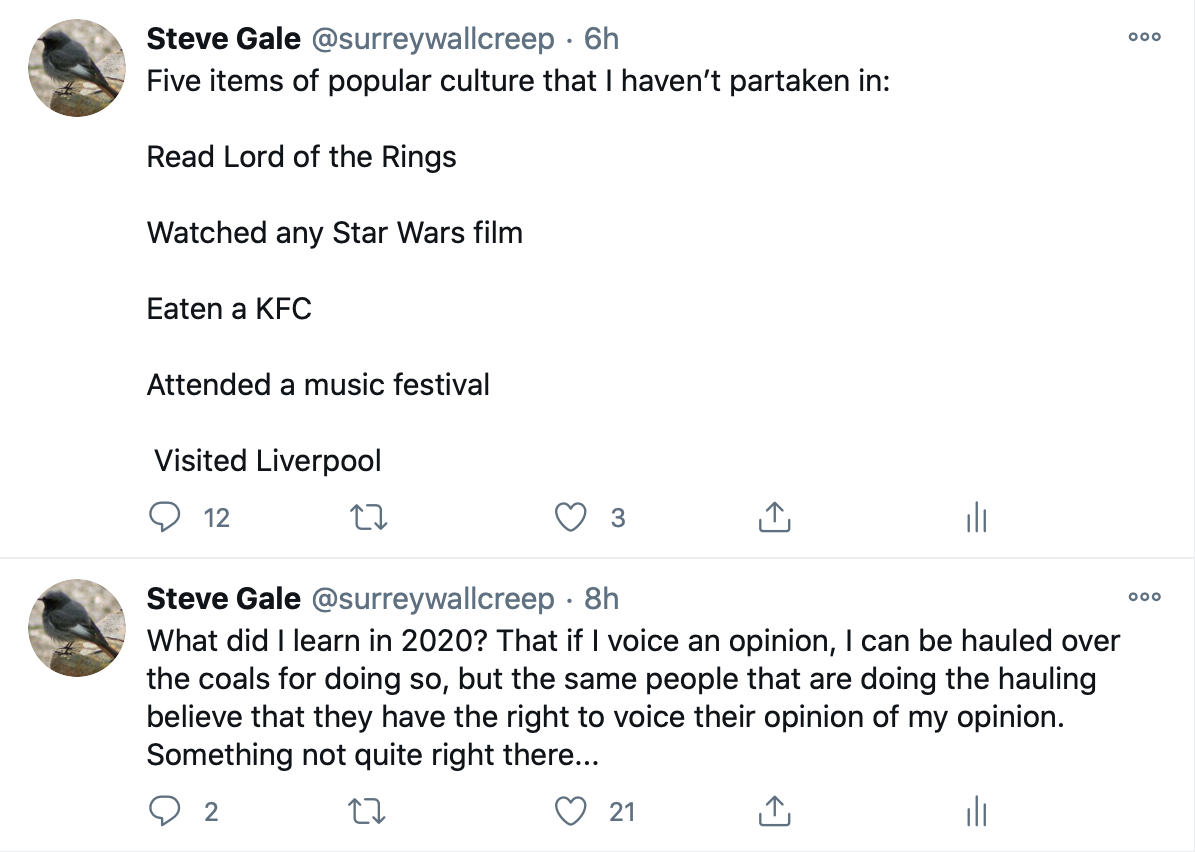 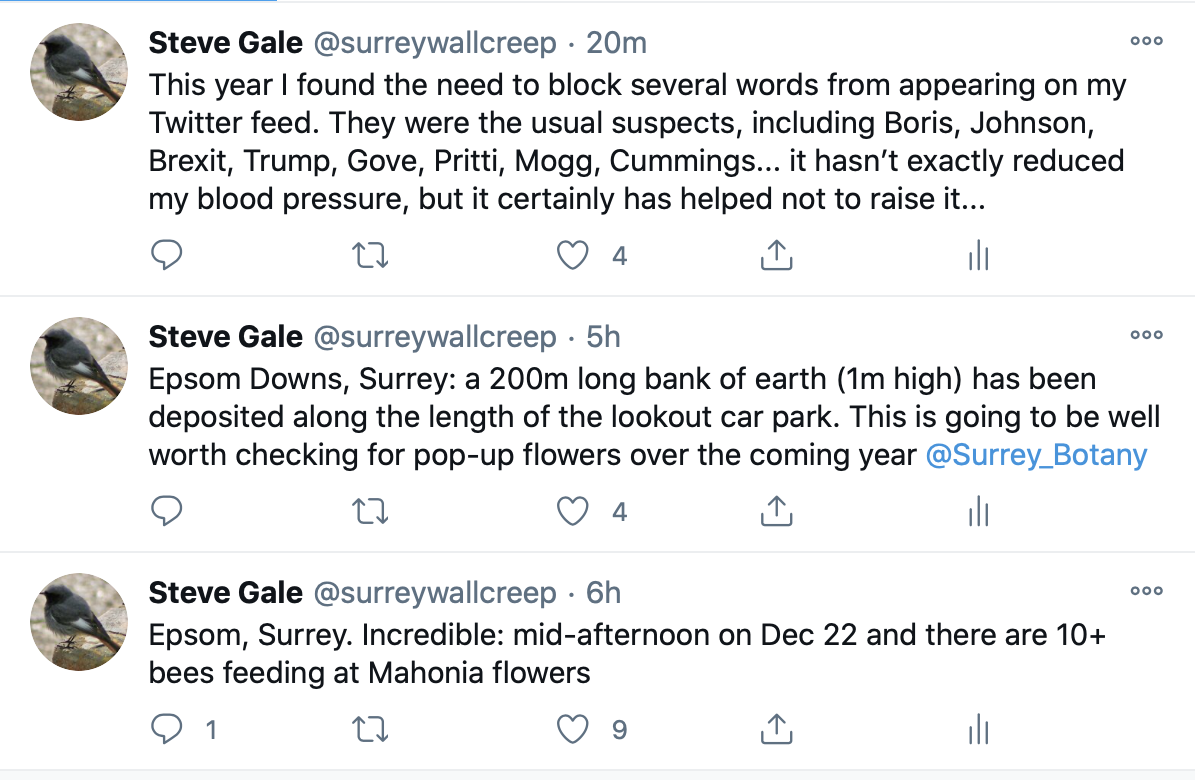 As you can see, a right old mix of the banal and vaguely interesting. But they did elicit some response and a bit of banter. I also responded to tweets posted by other users and so became embroiled in conversations as diverse as the 1989 Kent Golden-winged Warbler, #BWKM0, and Kent birders. They say that television is the 'thief of time', but that could just as well apply to Twitter. Sometimes a tweet just takes off for no particular reason - this one garnered over 1200 likes. It also produced a few negative comments: 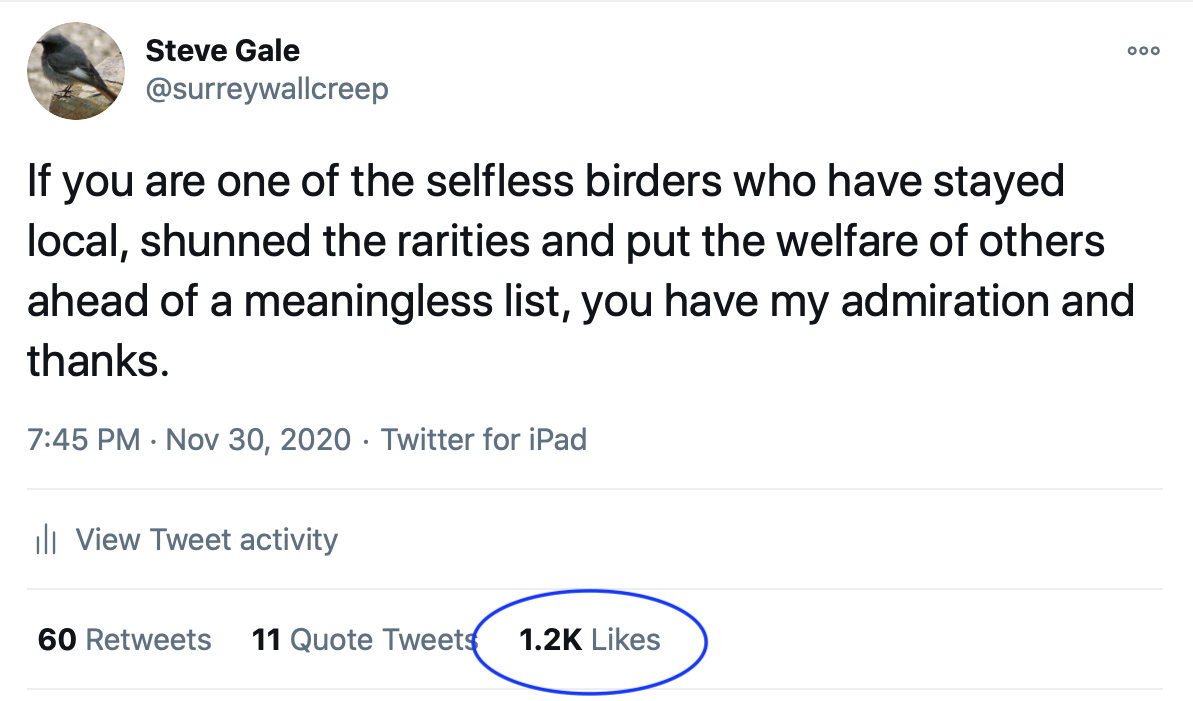 It is a platform that can sometimes embroil you in a spat, give you hope, produce a few laughs, make you despair, annoy you, in fact, just about every human emotion is and will be covered. It is addictive. There is a good reason that, just like people who buy drugs, people who are devotees of social media platforms are called users.

1.2k likes!! Almost viral ;)
I often think about ditching twitter. Not good for the mental health

Have you watched the Netflix documentary Social Dilemma?

Martin - agree with your verdict on mental health, so why are we reticent about ditching it?

Tony - yes I have watched it and probably need to do so again. And your best wishes are returned, thank you.

I would ditch it except that the natural history groups and contacts have proved invaluable. Lots of incredibly helpful and lovely people to help with IDs and info.
Swings and roundabouts. Just need to stop reading all the bile and hatred.

Martin, the natural history contacts are my excuse for remaining as well.

I probably ought to filter my Twitter feed more than I do, and exercise better self-discipline regarding what I read, because some Twitter content is depressingly toxic. That said, for me the pros comfortably outweigh the cons.

I enjoy reading your output, Steve. 😊👍

Thanks Gav, I most probably need to add a few more words to my filter to keep it sane. Looking forward to more tweets from you that contain the word ‘gull’...

Glad my name didn't appear on the list Steve.
Btw Can I add Firecrest to BWKM0? Had one in the garden the past two days. Could have been longer.

Ric - no, your name is always welcome, as that Firecrest must have been too.

I like the others who have commented here and yourself, would like to drop social media altogether(I dont see blogging as social media by the way) but I cant.
I wish I'd never seen the bloody thing to be honest. I does have good points, and that's why we stay, but there are some really bad ones too. I saw a lot of people were moving to Instagram so I had a look at that but realised it would just be yet another thing to waste my time, so I deleted the app, never to return.

See you in the twitterverse Steve #addict #antisocial #bollocks @stewchat

Yes Stewart, I will see you there....

I find Facebook far worse. truly awful at times. I make a concerted effort not to get embroiled in discussions with people who I know will steadfastly refuse to accept there is another point of view.