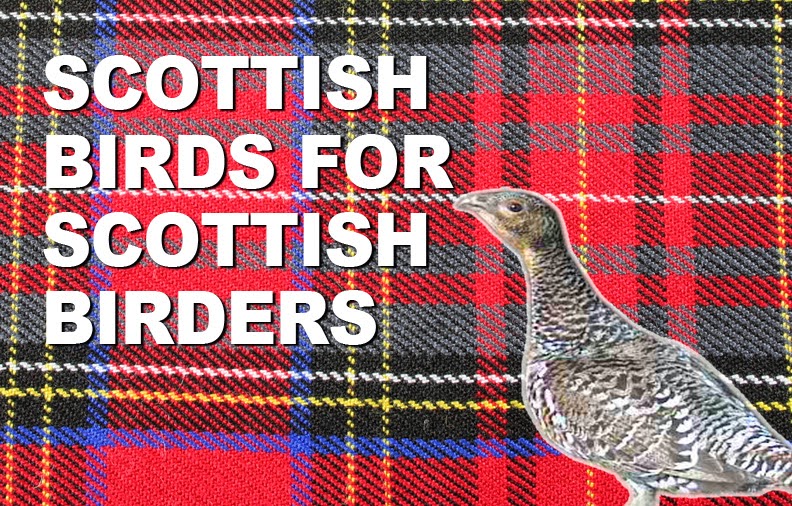 In a move that will provoke much discussion and soul-searching among birders, the Scottish Nationalist Party (SNP) have announced that, if the referendum to leave the UK is successful later in the year, then all Scottish birds will be removed from the BOU list.

In a rousing speech given in Fort William, SNP leader Alex Salmond said, "English twitchers have for too long been crossing the border into Scotland and plundering the birding finds of Scottish birdwatchers!" He was quick to point out that the best birding in Britain was "Scottish" and that "species like the Ptarmigan, Crested Tit and Capercaillie have no place on an English list".

In scenes bordering on high farce today, a small group of UK500+ listers were sailing to Fair Isle in a dinghy in an attempt to annexe it and keep that island "British" - whether or not Scottish independence is gained. "I've spent thousands of pounds - English pounds - going to Fair Isle down the years. I cannot see all of that cost and effort go up in a tartan puff of smoke! The Citril Finch twitch alone cost me £800 and a divorce! I cannot let in happen," said one well-known twitching face.

A few English and Welsh birders, happy with the thought that at least the rarities that they have seen on the Isles of Scilly were safe, had to quickly come to terms with a renewed effort on the part of Mebyon Kernow, a Cornish Independence party, to divorce that county from England. Jonathon Penhalligon, MK spokesman on rural affairs said "We've had enough of these birding emmets coming down to Kernow, burning up the valleys and clogging up the lanes of St. Mary's, St. Agnes and Tresco with tripods and scopes. They can bugger off and find their own birding hotspots in Devon..."

And not to be outdone, members of Sons of Glendower are using this period of political instability to increase pressure on the Welsh parliament to leave the UK and so remove all those goodies seen on Bardsey, Ramsey and Anglesey out of bounds to the 'filthy mitts of English twitchers". "They can go whistle for Black Lark and Catbird as far as I'm concerned" one hooded cottage-burner said.

The main political parties were quick to respond. All suggested that a "Britain without Scottish Crossbills would be a Britain without a truly endemic species", although Vince Cable was reported to doubt the validity of that bird as a 'proper' species. David Cameron pointed out that since the coalition came to power "we have seen a five-fold increase in incoming species such as Great White Egrets and Glossy Ibis". Labour's Ed Miliband responded with damning figures that showed "that under a Tory government Turtle Doves had decreased by 95%". Nigel Farage of UKIP was quoted as saying that "there would be nest sites made available for English House Sparrows but none for foreign birds like French Partridges, Spanish Sparrows and Syrian Woodpeckers".

However, some organisations, such as the Bird Observatories at Spurn, Flamborough and Filey are positively welcoming Scottish independence and the removal of Scottish birds from the 'British' list. "We've been stockpiling 'Northern' rarities for a few years now" said Seth Wainwright, a top Yorkshire birder. "Pechora Pipit, PG Tips, Yellow-breasted Bunting, they're all on our lists. We reckon on a lucrative influx of southern birders to God's Country in an attempt to stand a chance of gripping the Scottish rarities back. Mind you, Yorkshire might be pushing for independence by 2020, so thee can all fook off down to Norfolk when tha' 'appens..."
birding Scottish independence

Unknown said…
This storm in a teacup can be happily resolved by concreting over London. Birders won't cry over that too much.
4 May 2014 at 21:54

Steve Gale said…
There are more birders than you think who would be up in arms over a concreted London!
5 May 2014 at 19:46

Rob said…
Spare a thought for the Scottish birders who would end up twitching Green Woodpeckers & Avocets! And the loss for them of Cirl Bunting, Golden Oriole, Nightjar, Rough-legged Buzzard and others.