Aliens on the streets

Dull, wet, blustery... 2018 isn't doing much to endear itself to us. From a personal point of view I've also been wrestling with a virus/bug that has forced me to miss a handful of family and friends get-togethers, plus any venturing out into the field. This morning I did feel up for a wander around the local streets and copses, so was able to start my 'uber patch' botanical search - a project for this year that will hopefully enable me to become far more proficient in the identification of critical groups (such as crucifers), grasses, sedges and rushes.

Without busting a gut I recorded 29 species, including a few exotics such as Trailing Bellflower, Snowberry (inset), Yellow Corydalis, Spotted Dead-nettle, Sowbread (Cyclamen hederifolium, main image), and Corsican Hellebore. The later species is present on a well vegetated central reservation on a busy road. I first came across it a number of years ago (when I braved the traffic to identify it) and it has flowered every year since. Today it is in bud. I did consider rushing across to get a photograph, but I didn't fancy causing a pile-up and spending the first weeks of 2018 in hospital. The usual suspects were also recorded and they enliven many a winter's day - so take a bow Yarrow, Daisy, Petty Spurge, Red and White Dead-nettles, Common Chickweed and Shepherd's-purse! 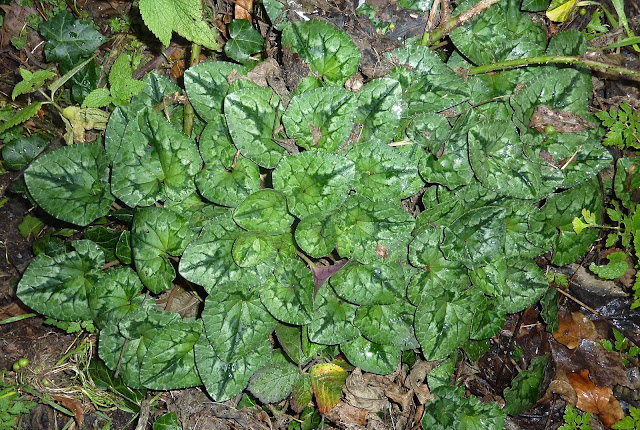 Some botanists baulk at 'escapes', 'aliens' and 'exotics' - call them what you will. But when you consider that much of our supposed natural flora has been introduced here by human agency (albeit several hundred years ago), to treat the modern equivalents in any different way seems unfair. As far as I'm concerned, a bank of dumped soil is like a botanical treasure chest. I can spend many happy hours wandering urban and suburban streets, checking alleyways, walls and grass verges for those opportunist plants.

Long time no speak, Steve. All the best for the New Year and good luck with the "Uber Patch" plant task.

I agree re. your comments regarding the "alien" plants, like you said, there are a lot out there that aren't totally natural to this country.

Hello Dean, great to hear from you, how are you? I do miss your blog, one of the originals that were linked to the very first version of ND&B. All the very best to you too.

Yes Derek, there are plenty of 'wild' plants that are, in fact, not. And that goes for the whole world, not just our little bit of it.

I'm doing well these days, cheers Steve. I started quite a few blogs since then but i went thru a few bad stages (mentally) and lost the will to carry on with them...but i'm in a good place now and so looking fwd to my first full year up here in Glasgow (spent 4 month up here last year prior to moving up for good in October).

Pleased to hear that you are in a good place Dean (literally and metaphorically). Take care!