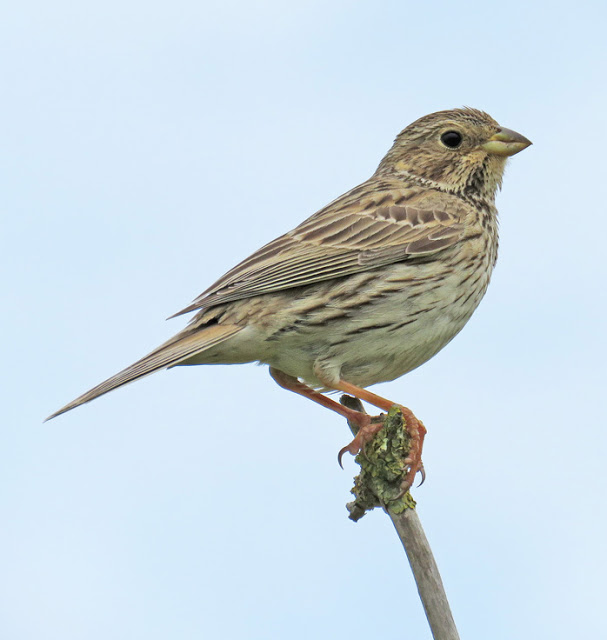 And now for the passerines - as per yesterday's post, all my own data...

Tree Pipit LOSER
Summer visitor, passage migrant and former breeder.
Up until the early 1980s it was easy to find this species singing and holding territory on the southern heaths and commons of the study area, first recorded at Headley Heath and Epsom Common (1977), Box Hill (1978) and Banstead Downs (1985). During this time up to six birds could be found holding territory at Headley Heath (3 May 1977 and 27 April 1980). A general fall in numbers, plus the scrubbing over of some sites has lead to its local demise. Since then it is found as a scarce passage migrant, with records from Beddington SF, Holmethorpe, Nork, Banstead , Canons Farm and Priest Hill. Extreme dates: 12 April 1993 (Holmethorpe) - 3 October 1993 (Beddington SF)

Yellow Wagtail LOSER
Former summer breeder; scarce passage migrant
First recorded at Beddington SF (1975), Searrs Park, Cheam (1983), Holmethorpe (1991), Canons Farm, Banstead; Nork, Banstead (2001), Colley Hill, Reigate (2013) and Epsom Downs (2014). Breeding birds were present at Beddington SF until the early 1980s (but at only one-two pairs per year). Extreme dates: 4 April 1985 (Beddington SF)  - 24 October 1976 (Beddington SF). A single also attempted to winter at Beddington SF, last being seen on 4 December 1984. This site has always held the highest numbers in the area, with counts of 10 - 15 regularly made, peaking at 22 on 6 September 1986 and 20 on 12 September 1976. Away from there, peak counts of seven were made at Holmethorpe on 27 April 1997 and Canons Farm, Banstead on a murky 20 April 2008.  When conducting the 1983 Searrs Park, Cheam project, a small but regular passage of overhead migrants was recorded between 18 July -21 September which included three birds on 19 September. Birds of the blue-headed race have been recorded at both Beddington SF and Holmethorpe.

Grasshopper Warbler LOSER
Former breeding summer visitor
Before it scrubbed over, it was fairly straight-forward to find this species ‘reeling’ on Epsom Common. Between 1975 and 1980, I recorded up to three territories, extreme dates for this site being 21 April 1978 – 10 July 1975. My only four records away from there are singles on 25 April 1982 at Beddington SF, 19 April 1998 at Holmethorpe, 15 April 2011 at Canons Farm, Banstead and 17 April 2017 at Priest Hill, Ewell.

Common Whitethroat WINNER
Breeding summer visitor
Extreme dates: 10 April 2011 (Headley Heath) - 26 September 2017 (Canons Farm, Banstead). Peak counts: 40 singing birds during the summer of 1994 at Beddington SF; 32 on 1 May 2017 at Priest Hill, Ewell. A steady climb in the breeding population has been witnessed, climaxing in the mid-1990s. Since then numbers across the area have either stabilised or fallen slightly, with the Beddington SF population much reduced due to landfill activity. However, a number of semi-urban scrubby habitats have been colonised over the past five years, suggesting that a healthy population is now over-spilling.

Blackcap WINNER
Summer and winter visitor, passage migrant
Wintering birds have been recorded at Nork, Banstead in most winters since 1989, sometimes up to seven birds being present. Breeding birds are found commonly in woodland predominantly away from the north of the study area. Peak count: 14 on 30 April 2005 at Holmethorpe. As each year passes by there seems to be more of these smart birds throughout the year


Firecrest WINNER
Rare breeding resident, passage migrant and winter visitor
First recorded at Nork, Banstead (2005); Banstead Downs (2008); Beddington SF (2011); Juniper Bottom and Nonsuch Park (2014); Chipstead Bottom (2015); Box Hill and Ranmore Common (2016). An expected component of a North Downs birding experience if you keep your ears open, where as once it would have been the day's (or month's) highlight.

Willow Tit LOSER
Extinct breeding resident
Sadly, this species now seems to be lost. Epsom Common was always the place that would guarantee this tit without too much effort, with a peak count of four on 24 February 1978, the last record being in 1989. In most years one or two pairs were present between the stew ponds and Stamford Green. Other records were of a casual nature; Walton Heath, two on 20 February 1977; Headley Heath, singles on 12 July 1978 and 27 April 1980;  Beddington SF, singles on 12 September 1978 and 17 June 1979 (the latter trapped); Nonsuch Park, Cheam, one on 25 September 1983; Ashtead Common, one on 25 July 1987.


Raven WINNER
Rare resident
A slow and modest colonising of the North Downs has been an unexpected and welcome event in the early years of the 21st Century. My first record was of a single bird on 9 March 2013 at Juniper Top, nr Box Hill, which was followed by a single on 6 October 2013 at Ranmore Common. Away from the downs I have recorded birds at Canons Farm, Banstead (2014) and Holmethorpe (2017). Peak count: three on 27 September 2014 at Canons Farm, Banstead.

House Sparrow LOSER
Decreasing breeding resident
This species has shown a decrease over the years, although the area in which I live (Nork, Banstead) has continued to support a healthy population. Peak counts: 400 on 11 July 1980 at Beddington SF; 200 on 7 September 1975 at Beddington SF; 200 on 6 November 1983 at Seears Park, Cheam; 150 on 2 August and 27 September 1980 at Beddington SF. It is perhaps worth noting that these peak counts are all over 30 years old. In recent years the largest count has been one of 80 at Canons Farm, Banstead on 23 August 2014 and 8 September 2016.

Tree Sparrow LOSER
Decreasing breeding resident and rare winter visitor
First recorded at Beddington SF and River Mole, Leatherhead (1975), Seears Park, Cheam (1983), Holmethorpe (1991). The breeding colony at Beddington SF is (or was) well-known, and counts could be high throughout the year, with a peak of 200 recorded on 25 February, 22 March and 26 November 1978. However, by the end of 2012, counts were much lower, sometimes only 20+ being made and by 2014 reports were that numbers had plummeted. At Holmethorpe, between 1991 – 1997, this species was not unexpected, but not quite annual, with a peak count of 25 on 25 January 1997. Since the latter date there has been only one further record, a single on 9 April 2005.

Greenfinch LOSER
Breeding resident, passage migrant and winter visitor. Maybe in decline
During the late 1970s, conditions at Beddington SF were to the liking of this species. Peak counts were: 1,000 on 2 October 1977; 380 on 30 September 1979; 300 on 23 September 1978, 24 August and 5 October 1980. All peak counts elsewhere refer to roosts, with 100 on 27 January 1983 at Seears Park, Cheam and 100 on 31 January 1999 at Nork Park, Banstead. At the start of the 21st century, numbers of this finch were in decline, with flocks very hard to come by and appearances in my garden became worryingly erratic. From 2015 it appeared as if some recovery was underway.

Bullfinch LOSER
Decreasing breeding resident, especially in the north of the area
My back garden in Nork, Banstead illustrates quite clearly the precarious nature of this species residency in suburbia. From 1987 until 2000 I could expect to see Bullfinches in the garden on a daily basis. In the latter year building started on neighbouring ‘wild’ land and overnight they ceased to be seen. It was not until 26 June 2009 that I saw another, and this proved to be the first of very few sightings. Epsom Downs continues to hold good numbers, as can be seen from counts of 20 on 20 January 2001 and 16 on 7 January 2001. Since then such counts have not been attained, although they are still present. Most sites away from built up areas do still support them, although parks that formerly held them in the northern part of the area seem to do so no longer. Peak counts:  21 on 1 January 2016 at Banstead Woods; 15 on 10 January 2017 at Headley Heath. During the autumn of 2017 a small influx was recorded across the south-east of England and was mirrored locally.

Steve,
The saddest part of this post is that these population booms/crashes have taken place within such short time scales. Humanity will, eventually, be called to account? Alas; far too late for the natural world with which we grew up and considered "normal"
To your list of losers I would add Song Thrush and Skylark - just the tip of the iceberg? The detrimental effects that our species are imposing on planet Earth has never been more dramatic. All the time the dollar rules, there will be no turning back! Sad - but very true! One thing's for sure - we won't live long enough to see a change of heart - Dyl

Thanks for your comments Dyl. I didn't add Skylark or Song Thrush because they have done quite well here over the past 40-odd years - not everywhere, but on balance well enough to not place in the 'LOSER' category. I know this isn't the same everywhere in the UK!

Skylarks are doing OK on the southern half of Sheppey, mainly because it's nearly all nature reserves but Song Thrushes are almost extinct here.

Yes Steve, there's a regular winter flock along the Harty Road every year, sometimes getting to around a 100 birds. Several pairs still breed on Harty/Elmley as well.